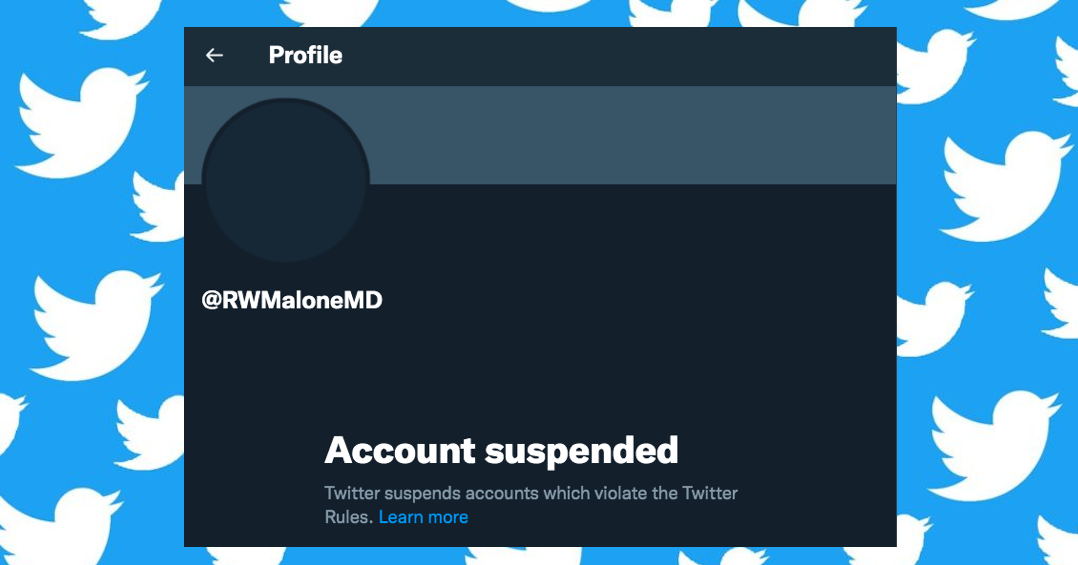 Twitter has banned the account of controversial virologist Dr Robert Malone, who reportedly had half a million followers at the time of his removal. Malone is credited even by mainstream critics as having played a significant role in the development of the mRNA technology being used for Covid-19 vaccines today, but has recently come under fire for comments about the safety of those vaccines’ use on children which the Authorized Fact Checkers have labeled “dangerously and flagrantly incorrect.”

Everyone should oppose the removal of Malone and commentators who share his views, regardless of whether they agree with them or vehemently despise them. The reason for this is very simple: only a fool would support government-tied monopolistic billionaire corporations regulating public discourse about Covid responses which affect us all. This is true regardless of what you personally happen to believe about mRNA vaccines.

Arguments that Malone and his ilk are peddling “misinformation” have no bearing on the question of whether they should be removed from the platforms everyone uses to debate ideas and discuss information. It is entirely legitimate to make arguments that their claims are inaccurate, but it is not at all legitimate to claim that platforms which large sectors of humanity have come to rely on for public discourse should interfere with or obstruct those conversations.

Dr. Malone may be right or may be wrong in his views regarding Covid vaccines.

But he is a respectable scientist, the inventor of mRNA vaccine technology(!), and so has the right to state his scientific opinion.

There is no justification for suspending him. It's a disgrace. pic.twitter.com/rG9jSV8QD9

Even if we were to accept unconditionally the position that people should be banned from such platforms if they are posting “misinformation”, who exactly do we imagine would be determining whether something is misinformation or not? Will we be consulting some impartial, agendaless, omniscient demigod through some sort of crystal ball or magical rune portal? Or would we in fact be relying on flawed human beings looking at the information through the lens of their own cognitive biases, agendas, perceptual distortions and knowledge limitations?

I ask because historically what these giant Silicon Valley corporations have been doing to determine who gets to have a voice and who doesn’t is working in consultation with think tanks funded by governments and the military-industrial complex like the Atlantic Council and the Australian Strategic Policy Institute, as well as working with the US government directly to an increasingly intimate degree. This fact is devastating to the popular argument that these are merely private corporations enforcing their Terms of Service, since they are becoming inseparably interwoven with government power. In a corporatist system of government, corporate censorship is state censorship.

Public discourse is consolidated on these gigantic platforms to such an extent that getting your ideas heard by a large number of people requires participation in them, and now they are determining how issues of such immense political importance as government pandemic responses may be discussed, and doing so in increasingly intimate collaboration with the most powerful governments on earth.

These restrictions on public discourse about the way human civilization responds to Covid-19 were first normalized in 2020 by the deplatforming of weirdos like David Icke for conspiracy theories linking coronavirus symptoms to 5G, and that normalization has continued to metastasize so far over the last year and a half that it’s now considered perfectly acceptable for these platforms to ban a popular scientific researcher whose work helped develop mRNA vaccines for expressing his scientific opinion about them.

Why You Should Oppose The Censorship Of David Icke (Hint: It’s Got Nothing To Do With Icke)

Humanity is a mess. We’re dealing with so many deep, deep problems and facing so many existential hurdles in our immediate future, and it’s clear that the people in charge aren’t going to navigate us through them with any degree of skill. This means we’re going to have to figure things out as a collective, and we’re not going to be able to do that if we’re forbidden from communicating with each other in ways the powerful don’t approve.

Certainly allowing human speech to flourish unrestricted would mean a lot of people saying things that we disagree with, and even saying things that are objectively and demonstrably wrong. But the alternative is allowing speech to be controlled by the same power structure which saw fit to invade Iraq, which is currently committing genocide in Yemen and pushing us toward direct military confrontation with Russia and China. Government-tied oligarchic megacorporations are among the very last institutions who should be in charge of worldwide political discourse.

The future of humanity depends on our ability to bring light to the darkness, to bring awareness to that of which we are not aware. As with individual awakening, a collective awakening will necessarily be sloppy, clumsy, and full of confrontation and awkward conversations. But it’s the only way we can begin working our way toward becoming a species whose actions are based on truth rather than untruth, on consciousness rather than unconsciousness. Until that happens, we will necessarily continue along our self-destructive trajectory.

NOTE FROM THE AUTHOR: My work is entirely reader-supported, so if you enjoyed this piece please consider sharing it around, following me on Facebook, Twitter, Soundcloud or YouTube, or throwing some money into my tip jar on Ko-fi, Patreon or Paypal. If you want to read more you can buy my books. The best way to make sure you see the stuff I publish is to subscribe to the mailing list for at my website or on Substack, which will get you an email notification for everything I publish. Everyone, racist platforms excluded, has my permission to republish, use or translate any part of this work (or anything else I’ve written) in any way they like free of charge. For more info on who I am, where I stand, and what I’m trying to do with this platform, click here.

It is the Indifference of Israelis that is Killing People