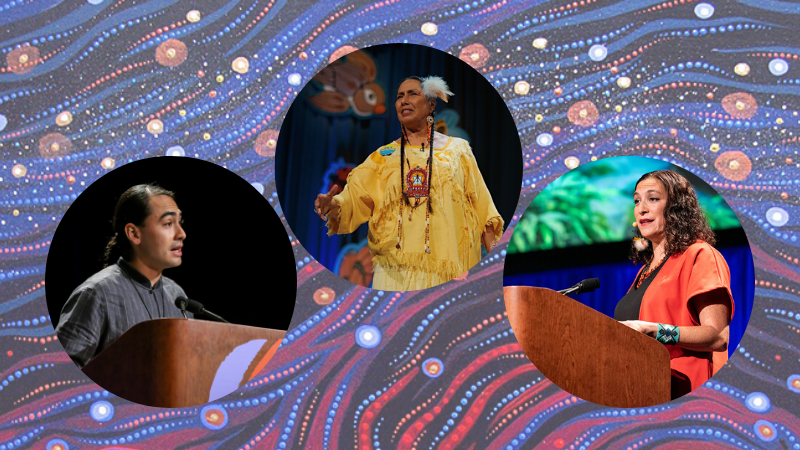 Indigenous Peoples are often on the frontlines of environmental justice movements. As original caretakers of the land, these communities have not only sought to protect their own livelihoods, but also to preserve humanity’s harmony with the Earth.

Below, three leaders on Indigenous issues discuss current events. Journalist and activist Julian Brave Noisecat explores how Indigenous communities are rising in a global renaissance; Ponca tribal Councilwoman, actress and activist Casey Camp-Horinek explains why aligning human law with natural law will help humanity regain balance with the world around us; and Leila Salazar-López, Executive Director of Amazon Watch, urges us to stand with Amazonian Indigenous Peoples to protect and restore the bio-cultural integrity of the “lungs of the Earth.”

At 6 in the morning on Monday, Indigenous Peoples Day, I stood on the sandy shoreline of San Francisco’s Aquatic Park, as a 30-foot ocean-going canoe, hewn from cedar and crewed by a dozen members of the Nisqually tribe of Washington, pulled out into the breakwater, its bow pointed for Alcatraz Island. The Bay glistened in the first light of the sun as Nisqually voices rose in unison above the din of the waking city, their paddles stroking the water to the rhythm of their song.

On the beach, I hugged my dad and then my mom. We’d envisioned and organized and fundraised and planned for this moment for more than two years. On Monday, our vision became reality.

The Nisqually canoe was the first to depart on the Alcatraz canoe journey, an indigenous voyage around Alcatraz Island to honor and carry forward the legacy of the 1969 occupation led by Indians of all tribes 50 years later. The Nisqually were followed close behind by the Northern Quest, its hull crafted from strips of cedars and painted with the crest of the white raven. Its crew hailed from the Shxwhá:y Village in British Columbia, Canada. They were soon joined by an umiak, pulled by an intertribal group from Seattle, as well as a dozen other ocean-going canoes from the Northwest and outriggers from Polynesia, representing people as far flung as the Klahoose First Nation in Canada and the Kanaka Maoli in Hawaii. At final count 18 vessels representing dozens of tribes, nations, and communities pulled out into San Francisco Bay that morning.

One of the last canoes to depart was a tulle boat, fashioned from reeds gathered from local marshes. It represented the Ohlone, the First Peoples of these waters. Antonio Moreno, the captain and artist, who made the canoe, paddled his craft and canoe out into the open water, the tulle reed sidewalls of his vessel barely rising above the waves. Antonio and his courageous crew pulled to Alcatraz and touched the craggy shore. His was the only vessel to make landfall that day.

The visiting canoes meanwhile circumnavigated the island, paddling counter clockwise, from south to north and back to Aquatic Park. A local ABC station captured the scene from high overhead.

The late Richard Oaks, one of the leaders of Alcatraz, once said Alcatraz is not an island, it’s an idea. The idea was that when you came into New York harbor, you’d be greeted by the Statue of Liberty, but when you came through the Golden Gate, you’d encounter Alcatraz, a former federal prison reclaimed by Indians of all tribes as a symbol of our rights, our pride, and our freedom.

The Alcatraz occupation lasted 19 months, by the time it was over, the United States had shifted its official Indian policy from one of assimilation, relocation, and termination to one of self-determination and sovereignty.

It’s possible to draw a line from Alcatraz to Standing Rock, Bears Ears, Mauna Kea, and much more. But today the occupation, if it is remembered at all, remains an afterthought. Every year over 1.4 million people flock to Alcatraz, more than any other national park in the country, to peer inside jail cells that once held notorious criminals like the Bird Man and Al Capone. The island has become a monument to carceral nostalgia, to the Mafiosos and lawmen and convicts and fugitives, not to Native Americans.

But for a day, or maybe even just a morning, the canoes made it possible to see Alcatraz as what it could be, a symbol of indigenous rights, resistance, and persistence, an island reclaimed by our elders 50 years ago, an idea, a story, and a moment of organized action that changed history.

On Monday, Courtney Russell, skipper of the Northern Quest, was the first to return to San Francisco. She stood in her canoe and said, “We are the original caretakers of this land. We are still here. We will not be forgotten, and we will continue to rise.”

Then we gathered in Aquatic Park to share songs, dances, gifts and stories about what Alcatraz meant to our families and our people. Hanford McCloud, skipper of a Nisqually canoe spoke of his auntie, Laura McCloud, who joined the occupation when she was just a senior in high school. Sulustu Moses of the Spokane tribe shared the story of one of his ancestors, a warrior imprisoned on the island after an 1858 war. When he finished, he stood and sung the war chiefs death song.

Alcatraz is not an island, it’s an idea. And with a little imagination and a lot of work, that idea moved bodies, pulled hearts and changed minds. As our people and all people face devastating crises, catastrophic climate change, growing inequality, revanchist hate, maybe the power of audacious and enduring Indigenous ideas like Alcatraz are exactly what we need.

Watch the full video of Julian Brave Noisecat discussing Indigenous activism, including the occupation of Alcatraz.

And at this time of imbalance, when humans have gotten their egos so berserk that they think because we speak a particular language that we share, we’re the boss. Yeah. That shows you just how stupid we are. We’re still that little child. We haven’t even hit adolescence. We’re still those little guys that say, “No, no, no, no, no! I want it my way! I want creature comforts! Give me something to eat. Give me something to drink. Take care of me right now!” And she does. And she does.

Not yesterday, not tomorrow, but today. We need to make that difference. And within our community, we do it in the kitchen-table way. All of our conversations looking for native rights to be upheld and environmental rights, which are one, was begun around our mama’s kitchen table, being taught. All of my daughters and granddaughters go to MIT. I myself am a graduate of Matriarch in Training. Two fists for that one! And down to the babiest one. They know how to listen to our Mother and to receive instructions from her, and to follow through with those fearlessly, as you must do.

We have strong, strong men in our family, and they’re beautiful warriors. They stand around us. Have you ever seen a herd of buffalo protecting the weakest in the center? They stand facing out taking on any obstacles. That’s my family. I’m proud of them. I didn’t even know this word called activist and environmentalist was something separate from what being a human entails.

And that’s what I’m here asking you to do: Take responsibility. Pay back to the Earth herself what she has gifted to you. Take responsibility today. Gather your family around your kitchen table, talk to them about what is going to happen in the next seven generations. Do you want to breathe? Do you want to eat? Do you want to drink? If you do, do something. Go to your state government. Go to your local government. Go to your federal government and say: We are part of nature. We want you to enact these laws, like in New Zealand with the Whanganui River. And if they don’t do it, you do it. You do it. And if you want to look in the mirror this evening, in the morning, any day, see yourself, really see yourself, you have the capabilities, you have the innate understanding, you have the spirit living within you that’s connected to all. Honor that. Honor yourselves. Honor all of creation.

Watch the full video of Casey Camp-Horinek discussing humanity’s relationship with the Sacred System — and how we must renew it.

And that’s why we actually joined together with APIB to put out a report called Complicity In Destruction to highlight and expose these corporations, big agribusiness traders like ADM, and Bunge, and Cargill, and retailers like Costco and Walmart, and banks, financial institutions like Chase and Santander, and BNP Paribas. And asset managers, very, very big banks, like BlackRock, and—How many of you all have heard about BlackRock? So thank you for those of you who know about BlackRock’s big problem. The rest of you look up BlackRock’s big problem and you’ll know that they are the biggest investor in climate destruction, whether it be agribusiness or fossil fuel.

And speaking of fossil fuel, these are the fossil fuel reserves in the Amazon. You may have heard about Chevron in Ecuador or Occidental Petroleum in U’wa territory or in northern Peruvian Amazon. That’s in the Western Amazon, that’s in the most biodiverse part of the Amazon, an area that we call the sacred headwaters region. It is the most biodiverse, culturally diverse part of the Amazon, and it’s in the Western Amazon. And these are the fossil fuel reserves across the Amazon that these companies and these governments would like to get their hands on.

And as I mentioned, I was just in Ecuador last week with some of my colleagues, and standing with Indigenous Peoples in meetings, actually. We were in meetings to talk about the alternative—alternative solutions to oil development. And it was very hard to be there last week because we were in meetings but we were also standing with Indigenous Peoples as they were rising up, rising up against the continued policies that would cause this, that would cause the destruction of Indigenous Peoples lands and the rainforest to cause massive oil spills like this. This is what it looks like. This is just a very small picture of what it is. We’re talking billions and billions and billions of gallons of oil and toxic wastewaters that have been spilled into the Ecuadorian/Peruvian Amazon as a result of oil development.

And for what? For a few weeks’ worth of oil? This is why people like Sarayaku, who are very close allies, have said no. We’re not. We’re not going to ever allow fossil fuel companies onto our land. We want to be free from oil development. We want to keep fossil fuels in the ground.

The youth have called upon us to stop talking and take action. How many of you were out in the climate march, climate strike? I was out there with my kids in San Francisco marching for climate justice, and I have to say that it restored my hope. After the fires, it was pretty daunting and devastating to come to work, and just get up in the morning, but seeing the youth stand up for climate justice and demanding that we take action really restored my hope.

Watch the full video of Leila Salazar-López discussing the importance of protecting the Amazon and its Indigenous inhabitants. 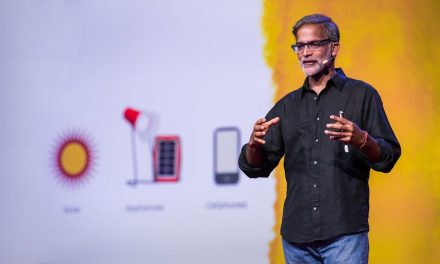