As dawn broke on Monday, June 3, Sudan’s Transitional Military Council (TMC) began a violent crackdown against pro-democracy protesters in the capital of Khartoum in response to a nationwide general strike the previous weekend.

Over a hundred people are confirmed dead. More stories have come out about rape, assault, and looting. Most of the TMC-aligned soldiers belong to the Rapid Support Forces (RSF), a paramilitary descended from the Janjaweed militias who gained international notoriety for their war crimes in Darfur.

In a bid to stop activists from communicating, both with each other and with the outside world, the TMC has even cut off the nation’s internet.

The military hopes that it can intimidate the people into accepting its rule. But calls for a civilian government remain strong. Another general strike began on Sunday, June 9. The TMC denies that it having any effect, butreports from inside the country show empty streets and shuttered shops in Khartoum.

Sudanese who have managed to get around the internet blackout, along with members of the diaspora abroad, share stories about the protests and voice their frustration at the lack of international attention through Twitter hashtags like #SudanUprising and #IAmTheSudanRevolution.

The Sudanese people have been protesting since late 2018. First, they stood against longtime President Omar al-Bashir, then against the military regime that supplanted him on April 11.

In their uprising for democratic civilian rule, they have demonstrated what journalist Justin Lynch describes as a “nearly religious belief in nonviolent methods.” They perform protests, sit-ins, strikes, and other forms of civil disobedience. But even as the TMC resorts to indiscriminate brutality, violent acts of protest – even mild ones like rock-throwing – are rare.

Nonviolence has proven an asset, as it has allowed Sudanese from all walks of life to join the protests. Women in particular have become the most prominent voices for democracy. Images of activists like Alaa Salah have been shared across international media, and she is only one of many inspirational female figures in this protest.

According to reporting by CNN, women constituted up to 70 percent of the original protests against the al-Bashir regime. In a country that has long suffered under a repressive interpretation of Islamic law, the Sudanese women’s leadership is truly remarkable.  Even in the face of abuses by security forces, they refuse to back down.

Indeed, despite the government’s endless attempts at coercion, the people of Sudan have continuously shown the fortitude to continue protesting and the courage to remain nonviolent.

They know that the military will always have the guns and troops to defeat them in a violent conflict. But they also know that not even the most dictatorial government can function without the cooperation of the citizenry. If they turn the fight into one for the hearts and minds of the people, there is no way that the TMC can win. 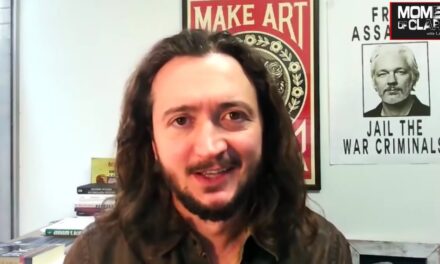