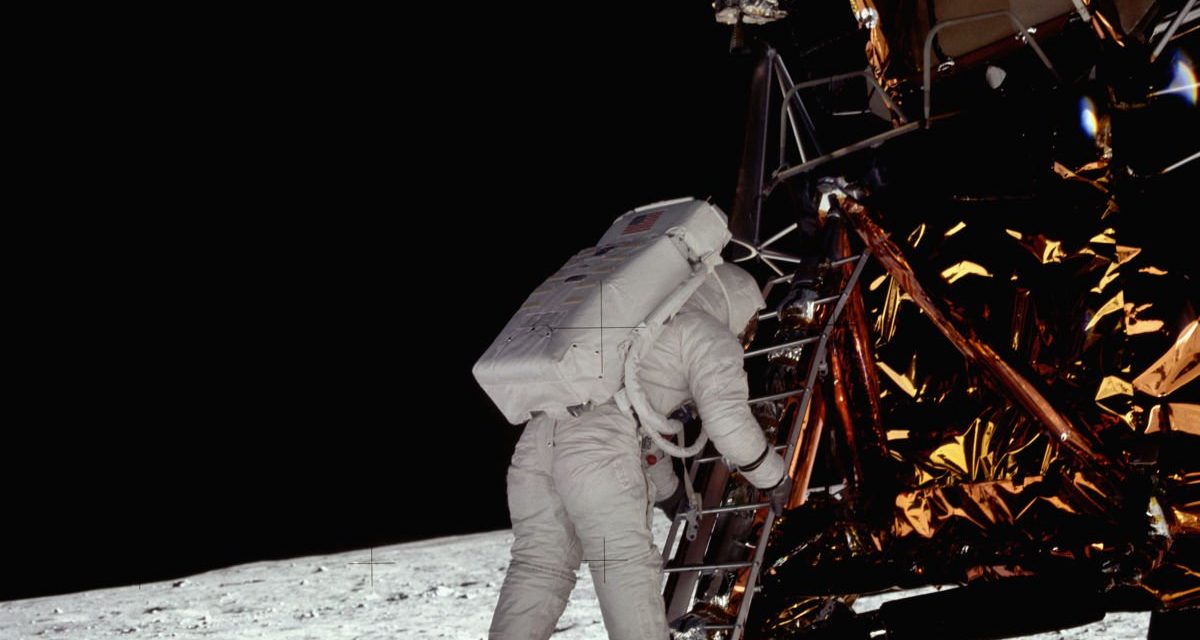 Apollo 11 astronaut Buzz Aldrin takes his last step off the Eagle lunar module onto the surface of the Moon. © CORBIS / CORBIS VIA GETTY IMAGES

“For me, the most ironic token of [the first human moon landing] is the plaque signed by President Richard M. Nixon that Apollo 11 took to the moon. It reads, ‘We came in peace for all Mankind.’ As the United States was dropping seven and a half megatons of conventional explosives on small nations in Southeast Asia, we congratulated ourselves on our humanity. We would harm no one on a lifeless rock.” — Carl Sagan

My little girl loves the moon. When she sees it, whether full in borrowed light or a waning sliver as crooked as her grin, everything stops while she looks up, and up. Sometimes she finds it in the blue sky of early morning or late afternoon and always asks me why it’s there, now. I always reply, “Because it fell asleep on the job,” and she always laughs.

“We sent people there once,” I told her when the Super Blood Wolf Moon practically pulled up a chair for dinner last January, and she was agog. “Really? Isn’t it far?” she asked. “Very far,” I told her. “Farther than Grandma and Grandpa’s house?” she asked. Sparing her the metaphysics of how far one actually has to travel in body and spirit to reach southwestern Pennsylvania from any point on the compass, I simply replied, “Way, way farther than that.”

She was impressed as she turned back to gaze upon the wolf moon’s vast face as it rose sideways in majesty behind a line of skeletal winter maples. Watching something that large move — actually being able to measurably perceive its motion — has always left me as astonished as my daughter was in that moment. I understand the science, but it remains a kind of magic to me.

A few beats of silence later, she asked, “How’d we do it?”

Half a century ago today, NASA pulled off what was at the time the most magnificent pool shot in the history of manipulated physics, and did so using computer technology that would get laughed out of the room now by any high-end smartphone in the land.

The Apollo 11 moon landing was the culmination of an effort to fulfill a murdered president’s promise. While the endeavor itself was entirely militaristic in scope and design — using Nazi ballistic science and scientists to achieve space superiority over the U.S.S.R. was both means and end — there was a grand quality to it, a pride not of nation but of species in the sheer scope of that staggering accomplishment.

While the endeavor itself was entirely militaristic in scope and design, there was a grand quality to it, a pride not of nation but of species.

Eyes that looked up millions of years ago through the crevice of Olduvai Gorge at the strange orb hanging in the night now stared back from that luminous sphere upon the blue-green promise of Mother Earth, because we said we were going, and we went. In the maelstrom of violence, assassination, racism, war and protest that roiled the nation 50 years ago today, Apollo 11 seemed a triumph without peer. It was a mighty thing we had done.

And yet, as ever, hard reality intervenes. The trope of an America that dares to do mighty things is a bald tire, as those mighty things almost always come with a towering body count. The bounty of the colonized South was bought through watering crops with the sweat and tears of slaves, and the riches of manifest destiny rolled West on train rails lubricated with Native blood. These, too, were mighty things.

Celebrations of our national audacity, more often than not, require an absence of full knowledge to maintain a sense of patriotic purity. The moon landing is no exception, coming as it did within the context of a criminal war in Vietnam that had been prolonged by the political machinations of a lawless president.

The mighty thing that is war, in all its permutations, is what the U.S. does best, and landing living humans on the lunar surface was an extension of the profitably deadly Cold War conflict being played out in the jungle far below. All the moon rocks and triumphalist cinematic retellings of the tale cannot bury this fact.

It has been said that something which can be destroyed by the truth must be destroyed by the truth. I would not destroy the astonishment of the accomplishment we mark today, but instead seek to augment it. Indeed, it seems doubly miraculous that a species so bent on mutual nuclear destruction could have summoned the wherewithal to slip the surly bonds of Earth, stand upon the most foreign of soil and return home to tell the tale.

Like my daughter, I stand in awe before the moon. Though I am flush with the knowledge of what lurks behind and beneath so much of our allegorical “greatness,” that lunar light still remains to me a beacon of almost limitless possibility. We did that. Because we did, we can do other things, and perhaps snatch back the meaning of greatness from those who have cloaked it in avarice, plunder and violence.

“Suffice it to say, all of us now, if we live long enough, are likely to become climate refugees at some point,” writes Dahr Jamail for Truthout, “whether it be from lack of food and water, rising seas, wildfires, smoke, or extreme weather events. For many, their time as climate refugees has already begun.”

We did that. Because we did, we can do other things, and perhaps snatch back the meaning of greatness from those who have cloaked it in avarice, plunder and violence.

The ocean is coming, and we must find greatness to contend with it before it ends us. Our global dependence on the poison of fossil fuels must be broken in a comprehensive paradigm shift that will require greatness to accomplish. Overcoming the deep-seated cannibalism of capitalism will be part and parcel of these endeavors, and will require greatness even to survive laying an existential challenge to so muscular a force.

“We choose to go to the moon,” said President Kennedy a little more than a year before Dallas. Fifty years to the day after his vision was achieved, we must choose to explore another space, one that lies within ourselves. It is the space between fear and courage, between inaction and purpose, to plant a new flag upon the greatness that awaits us. The moon will light our way, if we but look up, and up. 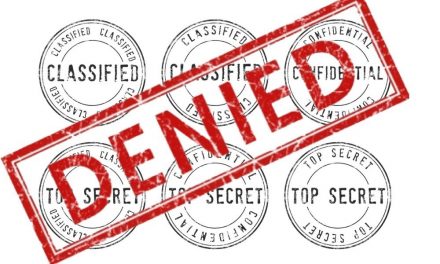