Hoxsey: When Healing Becomes A Crime 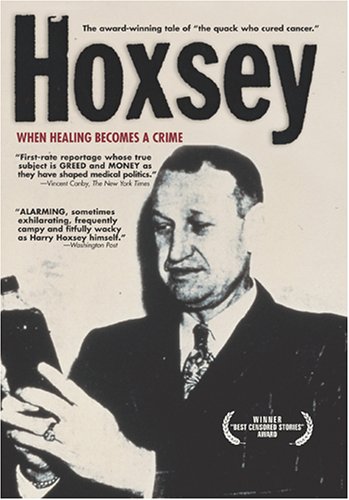 Description:  “DVD extras include: Bonus Film: ” A Hope and a Prayer” and an interview with the director. In 1924, Harry Hoxsey claimed a cure for cancer, herbal formulas inherited from his great-grandfather. Thousands of patients swore the treatment cured them; but the medical authorities branded Hoxsey the worst quack of the century. So began a medical war continuing to this day. By the 1950’s Hoxsey’s Texas clinic was the world’s largest, with branches in 17 states. Two Federal courts upheld his treatment’s “therapeutic value.” Even his archenemy, the American Medical Association, admitted it does cure some cases. Yet organized medicine banned the therapy, exiling it to Mexico where it claims an 80% success rate today. Why won’t medical authorities investigate the treatment? Hoxsey charged a “conspiracy” to suppress alternative therapies. Was Hoxsey a hoax? Or was he “The Quack Who Cured Cancer”? Hoxsey’s alarming scenario may make you angry, but most of all HOXSEY offers hope.”