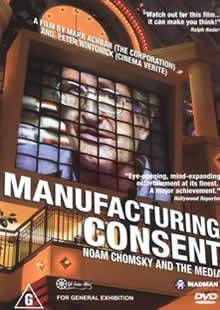 Description:  Film: “This documentary film explores the political life and ideas of Noam Chomsky, a linguist, intellectual, and political activist. Created by two Canadian independent filmmakers, it expands on the ideas of Chomsky’s earlier book, Manufacturing Consent: The Political Economy of the Mass Media, which he co-wrote with Edward S. Herman. The film presents and illustrates Chomsky’s and Herman’s propaganda model, the thesis that corporate media, as profit-driven institutions, tend to serve and further the agendas of the interests of dominant, elite groups in the society. A centerpiece of the film is a long examination into the history of The New York Times’s coverage of Indonesia’s invasion and occupation of East Timor, which Chomsky claims exemplifies the media’s unwillingness to criticize an ally. Until the release of “The Corporation” (2003), it was the most successful documentary in Canadian history, playing theatrically in over 300 cities around the world; winning 22 awards; appearing in more than 50 international film festivals; and being broadcast in over 30 markets. It has also been translated into a dozen languages.”