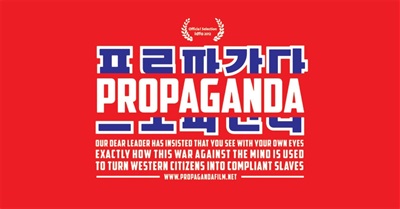 Description:  “Since it mysteriously appeared on YouTube on July 18, 2012, ‘Propaganda’ has been described as ‘1984 meets The Blair Witch Project’, ‘A mouthful of scary porridge’, and ‘Even better than Triumph of The Will.’ It topped Indiewire’s top 10 films to watch out for at IDFA, where it had its world premiere. This was followed by The Independent declaring it ‘the real viral hit of 2012’ and Films for Action rating it their Number One film for 2012. So far, the film has been translated in to six languages. Controversial to the core, ‘Propaganda’ is part of an ongoing international incident involving the Australian Federal Police, the South Korean Embassy in New Zealand, the Catholic Church, the Counter-Terrorism Unit in Christchurch and the Korean Society, which has publicly accused the filmmakers of being North Korean agents.”