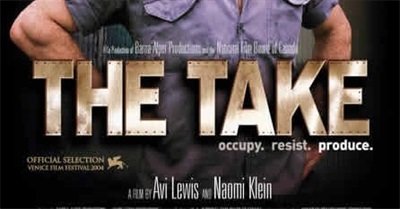 Description:  “In the wake of Argentina’s dramatic economic collapse in 2001, Latin America’s most prosperous middle class finds itself in a ghost town of abandoned factories and mass unemployment. The Forja auto plant lies dormant until its former employees take action. They’re part of a daring new movement of workers who are occupying bankrupt businesses and creating jobs in the ruins of the failed system. Directed by Avi Lewis and writer Naomi Klein, author of No Logo, the two directors champion a radical economic manifesto for the 21st century.”