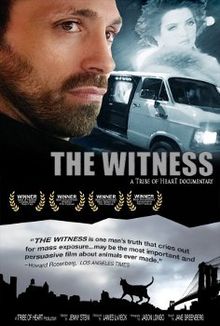 Description:  Film: “How does a tough Brooklyn construction contractor become an impassioned animal advocate? With moving personal stories and colorful insights, Eddie Lama describes how he feared and avoided animals for most of his life, until the love of a kitten opened his heart, inspiring him to rescue abandoned animals and bring his message of compassion to the streets of New York. The film’s final scene, featuring Sarah McLachlan’s song Angel, powerfully depicts Eddie’s heartfelt efforts to awaken public awareness. “The Witness is one man’s truth that cries out for mass exposure” wrote Los Angeles Times columnist Howard Rosenberg, “may be the most important and persuasive film about animals ever made.” A story of beauty and transcendence in the face of tragedy and despair, this award-winning documentary will challenge viewers to question their own ideas about the human-animal relationship.”