(I wrote this about 20 years ago when I was really struggling to come to terms with the enormous destruction humanity is wreaking upon the Earth, while also appreciating the deep resilience of life.  I was also appreciating the cyclical patterns of life, and wanting to capture this by drawing parallels between the very long scale of evolution and the much smaller scale of our present lives.)

The Sun, a blazing ball of brilliance . . .
Pure beyond words, intense beyond sense,
Distant beyond imagination, and enormous still yet,
. . . Sends its gift, its glory.

Vibrations of life, fingers of love,
They knead, they persuade, the lifeless mud.
Brown, it swirls and mixes with the vast sea blue,
Tiny forms wriggle and squirm, free to explore a world so new.

Freed from their prisons, the cages of cold,
Water droplets descend and spiral
as the wonder of gravity tightens its hold.

They embrace one another with a common drive,
Harmoniously humming like the bees of a hive,

Down,
down,
ever down,
the dance spreads more and more.
So intoxicating, so liberating . . . and the rivers roar.

Sprung loose from the mountain, free to explore,
A creek teases a meadow, tickles its shore.

The soft faces of buttercups shine as they laze in the sun,
A doe leads a young fawn, demonstrating with grace
how to dance . . . and how to run.

A butterfly flutters, not a care in mind,
While a young fox leaps and rolls, nipping playfully behind.

But beyond the sweet song of a lark,
Heavy on a warm valley breeze,

So faint yet so bold,
so lifeless, so cold,

It begins a faint whisper,
Is it real or only in the mind . . . ?
A tug, faint but urgent;
A voiceless expression of “mine, mine, mine.”

But the whisper, it murmurs,
And the murmur, it howls.
It comes, how it grows,
From the realms of thought
To the world that we know.

It grows to a scream and rips through the sky;
Deafening and fierce, a raging battle cry.

Gears gnash and grind, metal shrieks and groans;
A hungry machine is loose, free to feast, free to roam.

Life is crushed, without ruth, in a fever of feast,
From fawns and young foxes, from hives of bees.

Silent screams reach out, unheard by this beast,
But they echo and ring through eternity.

Dark fingers of death, they constrict and squeeze;
They strangle the land and suffocate her breeze . . .

The reek of destruction is fresh in the air;
The machine looks around with a bloodthirsty glare.
The hunger, it grows to a ravenous need.
It surges forwards and charges with blinding speed.
Whole mountains and prairies vanish in a deafening roar;
The voiceless voice is now screaming, “More!  More!  MORE!”

A lifeless wasteland emerges in the monster’s wake,
a growing sea of seamless concrete.
On and on, the production of material death,
from life that was once so vital, so sweet.
The insatiable appetite continues to persist,
For without it, the machine would cease to exist.

But the day finally comes when the last green patch . . .
Is swallowed down the gaping hatch.

The machine looks around, frantic, desperate for more,
But as it takes in the scene, its eyes open wide, its jaw drops in horror.
From horizon to horizon, as far as it can see,
There is nothing but concrete, not one blade of grass, not one tiny bee.

The seasons come and go, the years pass by,
The only thing that is moving is the sun through the sky.

The sun blazes, the land bakes.
The concrete bubbles and warps, determined not to break.
But the sun is so patient, so alive, so pure;
Only the sky can it not endure.
Warm fingers, they prod and finally push away
The black, and reveal the light of day.

A sprout feels the touch and bursts through its shell.
It struggles and pushes from the depths of hell.
Upward it drives, with unfettered ambition, unyielding resolve,
It strives for the sky, it strives . . . for love. 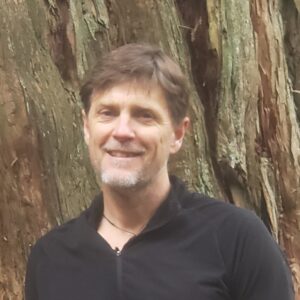 Paris Williams, PhD, has degrees in psychology and ecology. He has strong interests in trauma and holistic wellness at both a personal and collective level, and is very concerned about escalating social inequalities and escalating harm done to the Earth and its many ecosystems and species. He is the senior editor for CNCL's blog. Find more of his articles/media here.

Just For This Moment

Ode to the Monarch Butterfly