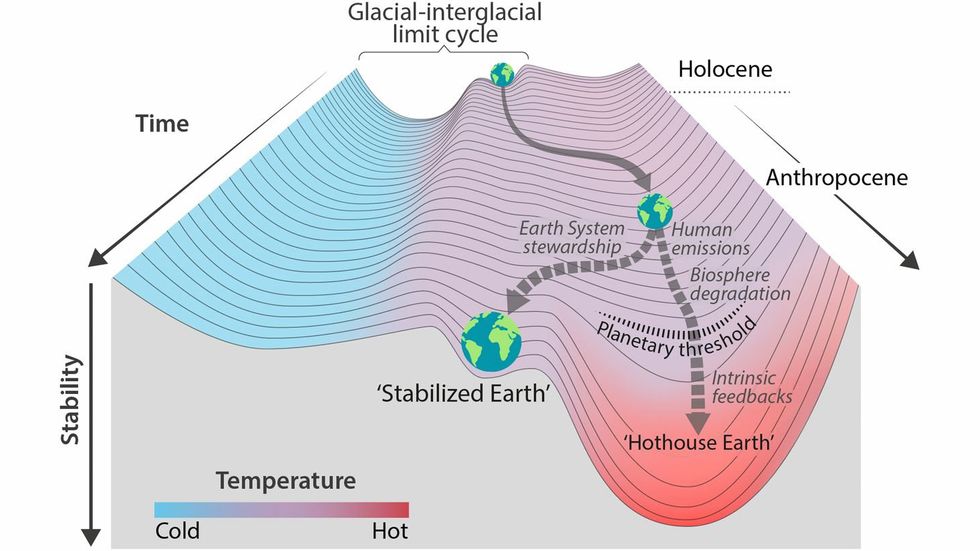 Five years ago: Nations of the world met in Paris to draft a climate agreement that was subsequently accepted by nearly every country in the world, stating that global temperatures must not exceed +2C pre-industrial. Global emissions must be cut! Fossil fuel usage must be cut!

Not only that, global governments plan to increase fossil fuels by 120% by 2030, including the US, China, Russia, Saudi Arabia, India, Canada, and Australia.

Additionally, over that past 18 months, China has added enough new coal-based power generation (43GW) to power 31 million new homes. China plans on adding another 148GW of coal-based power, which will equal the total current coal generating capacity of the EU.

India increased coal-fired power capacity by 74% over the past 7 years. The country expects to further increase coal-generated capacity by another 22% over the next 3 years.

China is financing 25% of all new worldwide coal plant construction outside of its borders, e.g., South Africa, Pakistan, and Bangladesh. Meantime, China, kissing goodbye to its commitment to cut emissions, cuts renewable power subsidies by 30%.

Likewise in the United States, Trump proposes slashing renewable budget items, as his administration rebrands fossil fuels “Molecules of U.S. Freedom.” (Forbes, May 30, 2019) (Obviously, somebody in the WH scoffs at the general public as horribly gullible, simple-minded, ignorant, and just plain stupid to fall for that one!)

Meanwhile, America’s most northerly town, Barrow, Alaska, is experiencing an unprecedented “massive spike in methane emissions” ongoing for the past 4 months, as monitored by Dr. Peter Carter (see more below).

And in Madrid, COP25 (Conference of the Parties25) was underway Dec. 2nd-13th with 25,000 participants from countries of the world gathered to hammer out the latest details on global warming/climate change. The question arises whether the conference had “legs.” By all appearances, it did not. Rather, it was another repeat climate sideshow.

Making matters even more surreal, because of the above-mentioned death-defying global plans to accelerate fossil fuels by 120% to 2030, the Stockholm Environment Institute claims the world is on a pathway to 3C pre-industrial, probably “locked-in” because of fossil fuel expansion across the globe.

But caution-caution-caution, the IPCC has already informed the world that 2C brings the house down, not only that, scientists agree 1.5C is unbearably unlivable throughout many regions of the planet.

In short, the world is on a colossal fossil fuel growth phase in the face of stark warnings from scientists that emissions must decline to net zero. Otherwise, the planet is destined to turn into a hothouse. As things stand today, it appears “Hothouse” is baking into the cake. And, Hothouse implies too much heat disrupting, and destroying, too many ecosystems for the planet to support 7.8 billion people.

For an insider’s view of the goings-on at COP25, Dr. Peter Carter, an IPCC expert reviewer, was interviewed on December 10th:

The following is a synopsis of that interview: He first mentioned the fact that 11,000 scientists have signed a paper stating: “We are definitely in a climate emergency.”

“At COP a couple of years ago, there was a lot of media given to the terrible fact that four of the countries had gotten together to block the most important IPCC report ever. Which was the 2018 IPCC 1.5C report, showing that 2C, the old target since 1996, is total catastrophe, and 1.5C is still disastrous, but that is still where we must aim.” (Carter)

Scientists today agree 1.5C is possible only if we reduce emissions by 7% every year from next year so that we can reduce global emissions 50% by 2030. (Comment: “That’s laughable” – Check out global fossil fuel growth plans, bursting at the seams!)

COP has always been set up to fail. However, the first COPs were hopeful. Ever since then, things have gone down, down, down. The reason why they are set up to fail is because when the Convention was signed in 1992, it was stated that major decisions would be by “consensus,” but “we still don’t have a definition of consensus under the Convention.” That is absurd.

The entire COP set up provides for one or two countries to veto any major decision, and that’s what we’ve seen happen. The US, Russia, Saudi Arabia, and Kuwait “block the science from the negotiations.”

“In COP25, the science has been blocked completely.” (Carter)

“Right now, all three major greenhouse gas concentrations, carbon dioxide, methane, and nitrous oxide, are accelerating. It means we are on a trend for total planetary catastrophe. We are on a trend for biosphere collapse. Carbon dioxide is on a rate exceeding anything over the past millions of years. We are at 412 ppm. To put that into context, we have an ice core that goes back 2.2 million years. The highest CO2 over that period is 300 ppm.” (Carter)

The latest IPCC assessment requires holding temps to 1.5C, meaning emissions must be cut by 50% by 2030, which means emissions have to decrease rapidly from 2020 (Comment: That’s an impossibility because of global fossil fuel plans of +120% growth by 2030).

We’ve had four separate reports this year on the status of countries meeting, or not meeting, their mitigation targets to avoid catastrophe. Result: “It’s basically the end for humanity. We’re looking at biosphere collapse. The richness of life is being destroyed by deforestation and by catastrophic climate change. Africa is in severe drought. Chile is in a megadrought. Australia is in a drought expected to become a megadrought within the next two years.” (Carter)

Absolutely nothing is happening to mitigate global warming. Furthermore, nothing will come out of COP25 to mitigate the issue. On the very first day of meetings, Carter was told nations would not be looking at improving their national mitigation targets, which are a joke anyways.

“It is unbelievable what these high emitting fossil fuel producing countries are doing. Countries that are blocking any progress on emissions are acting in the most evil way imaginable. We’re looking at the destruction of Earth, oceans and land.” (Carter)

Furthermore, and chillingly, according to Dr. Carter: Currently, there has been a massive ongoing eruption of methane in the Arctic. It’s gone practically unreported. The only report of it was by the Engineering and Technology Journal.

Barrow, Alaska registered the aforementioned massive bursts of methane into the atmosphere, starting in August of this year. “We’ve never seen anything like it! And, it has stayed at elevated levels to the present week. Looking at the 2.2 million year ice core, the maximum methane concentration ever was 800 ppb. In Barrow, Alaska it is 2,050 ppb and staying there. It’s been up there for 4 months.” (Carter)

Which is an ominous warning that has the potential to be a precursor to runaway global warming, burning-off mid-latitude agriculture and categorizing the Tropics as “way too hot for life.”

We (Carter and the scientific community) know that really bad things are happening in the Arctic. We also know that the land permafrost is emitting a lot of methane, CO2, and nitrous oxide (12xs more than scientists estimated).

Conclusion: COP25 is a farce as major countries ignore the threat of global warming by upping the ante on fossil fuels, adding nearly $2 trillion worth of new fossil fuel infrastructure since Paris’15 warned of dangers associated with too much carbon in the atmosphere, a surefire recipe for Hot House Earth.

Lest we forget, Venus, our sister planet, has 96.5% CO2 by volume in the atmosphere. On average, temperatures run 864°F.

Postscript: “Accelerating heating of the Arctic Ocean could make global temperatures skyrocket in a matter of years” (Source: Arctic Ocean Overheating, Arctic News, September 8, 2019). Since the start of the industrial revolution more than 200 years ago, that’s the worst possible news ever.

In Greenland’s Melting Ice, A Warning on Hard Climate Choices