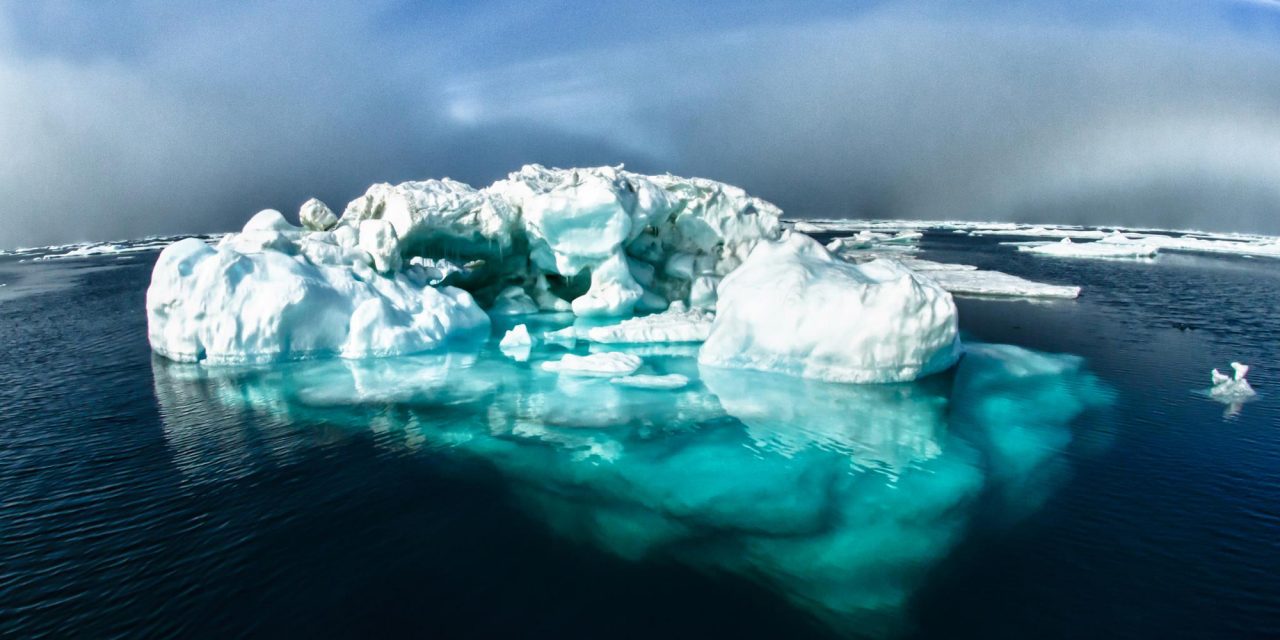 New research finds the Arctic’s oldest and thickest ice is more mobile and is vanishing twice as fast as ice in the rest of the Arctic. Image Credit: NOAA.

WASHINGTON—The oldest and thickest Arctic sea ice is disappearing twice as fast as ice in the rest of the Arctic Ocean, according to new research.

A new study in AGU’s journal Geophysical Research Letters finds ice in the Arctic Ocean north of Greenland is more mobile than previously thought, as ocean currents and atmospheric winds are likely transporting the old, thick ice found there to other parts of the Arctic. As a result, ice mass in the area – the last place researchers think will lose its year-round ice cover – is declining twice as fast as ice in the rest of the Arctic, according to the new findings.

Most ice covering the Arctic is only one to four years old, according to the National Snow and Ice Data Center. As thin, young ice melts in future summers, only a 2,000-kilometer (1,240-mile) arc of ice will remain, stretching from the western Canadian Arctic Archipelago to Greenland’s northern coast. In this slice of the Arctic, which experts call the Last Ice Area, sea ice is more than five years old and can measure more than four meters (13 feet) thick.

The new research suggests the Last Ice Area is a dynamic place encompassing two sub-regions where ice thickness fluctuates by 1.2 meters (4 feet) from year to year. Ice is becoming thinner in two distinct subregions, which are losing 0.4 meters (1.3 feet) of ice thickness per decade, amounting to a 1.5-meter (5 foot) loss of ice since the late 1970s, according to the new study.

“We can’t treat the Last Ice Area as a monolithic area of ice which is going to last a long time,” said Kent Moore, an atmospheric physicist at the University of Toronto in Canada and lead author of the new study. “There’s actually lots of regional variability.”

Places with less ice movement, for example, may provide more suitable conditions for a wildlife sanctuary, as the ice will remain longer. The new study presents context for policymakers to consider when they establish protected areas in the Arctic, Moore said.

“Eventually the Last Ice Area will be the region that will repopulate the Arctic with wildlife,” Moore said. “If we lose all the ice, we lose those species. This area will be a refuge where species can survive and hopefully expand their regions once the ice starts returning.”

The Last Ice Area is home to the Arctic’s oldest and thickest ice because ocean currents and atmospheric winds carry patches of floating ice in a circular pattern. These blocks of ice crash into each other and pile up along the northern edges of Greenland and Canada. Researchers, however, know little about how ice in this region moves and melts during the year.

This lack of knowledge prompted Moore and his colleagues to track changes in the Last Ice Area. In the new study, the team modeled sea ice cover, thickness and motion across the zone from 1979 to 2018. Their model, based on satellite observations and atmospheric data, revealed two regions with distinct seasonal and inter-annual fluctuations – one to the east and one to the west. In both regions, sea ice was thinner and covered less area in the summer and early fall than in the Arctic winter, though ice thickness in the west tended to hit its minimum earlier in the season. Ice motion in the eastern portion of the Last Ice Area appeared to be more stable. Western ice – controlled by winds blowing clockwise – has begun moving faster, which could be the result of thinning ice.

According to Moore, the loss of ice in the Last Ice Area is likely due to ice movement out of the region, particularly in the west. If sea ice is thinner and moving faster, pieces at the margins will flow first into the open ocean, followed by larger bits from the center, like a big traffic jam.

“Historically, we thought of this place as an area that just receives ice,” said David Barber, an Arctic climatologist from the University of Manitoba in Canada who was not involved in the new study. “But these results are teaching us that this is a dynamic area.”

Founded in 1919, AGU is a not-for-profit scientific society dedicated to advancing Earth and space science for the benefit of humanity. We support 60,000 members, who reside in 135 countries, as well as our broader community, through high-quality scholarly publications, dynamic meetings, our dedication to science policy and science communications, and our commitment to building a diverse and inclusive workforce, as well as many other innovative programs. AGU is home to the award-winning news publication Eos, the Thriving Earth Exchange, where scientists and community leaders work together to tackle local issues, and a headquarters building that represents Washington, D.C.’s first net zero energy commercial renovation. We are celebrating our Centennial in 2019. #AGU100

Founded in 1965, UCI is the youngest member of the prestigious Association of American Universities. The campus has produced three Nobel laureates and is known for its academic achievement, premier research, innovation and anteater mascot. Led by Chancellor Howard Gillman, UCI has more than 36,000 students and offers 222 degree programs. It’s located in one of the world’s safest and most economically vibrant communities and is Orange County’s second-largest employer, contributing $5 billion annually to the local economy.

Notes for Journalists
This paper is freely available until December 15. Journalists and public information officers (PIOs) can download a PDF copy of the article by clicking on this link:
https://agupubs.onlinelibrary.wiley.com/doi/epdf/10.1029/2019GL083722

Neither this paper nor this press release is under embargo.