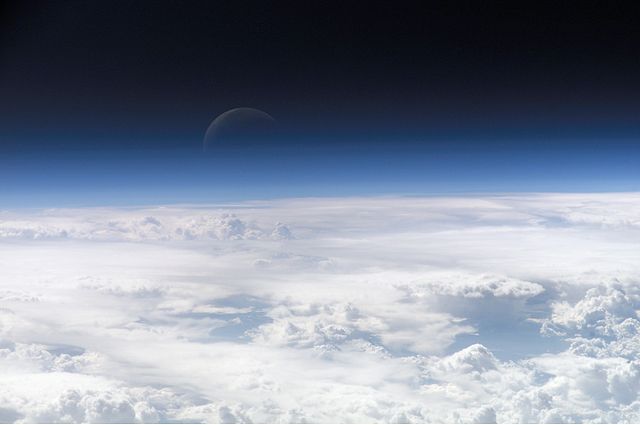 In August of 1987 the world came together after a panic-attack over ongoing depletion of atmospheric ozone, aka: The Ozone Hole. Subsequently, global agreements to stop ozone depletion became the first ever “universally ratified treaties in UN history.” The world banned CFCs.

Glory hallelujah! As a glorious Great Exhale spread across the land, similar to releasing pressurized air out of a humongous balloon, wheezing and hissing for days on end, in celebration of The Shrinking Ozone Hole! It was the first time in history that people celebrated a Shrinking Hole, and for good reason.

Ozone molecules are crucial to sustaining life. Those feisty powerhouse molecules shield the planet from destructive Ultraviolet B or UV-B, which can become big-time killers if left unchecked. According to NASA: “Without ozone, the Sun’s intense UV radiation would sterilize the Earth’s surface” which is a gentle way of saying “Mass Extinction.”

The problem is multiplied as CFCs have a lifetime in the atmosphere of 20 to 100 years, thus, one free chlorine atom from a CFC molecule can do a lot of damage by destroying crucial life-supporting ozone molecules over lengthy periods of time.

Sadly, the world must now reconsider holding its collective breath once again. On May 22nd 2019, the same Science News magazine that broke the good news and celebrated “A Shrinking Ozone Hole in 2012” newest headline reads: “Emissions of a Banned Ozone-Destroying Chemical Have Been Traced to China.”

As it happens, CFC-11 was, and is, used in manufacturing foams for construction materials, refrigerators, aerosol sprays, blowing agents, packing materials, solvents, and other consumer goods.

The Montreal Protocol of 1987 called for phasing out production of chlorofluorocarbons by 2010 when CFC-11 production was banned. However, by all appearances, China never got the memo.

Atmospheric observations, as well as on-the-ground investigations, have discovered a link of illegal CFC-11 in manufacturing districts in China. It should be noted that there are substitutes for CFC, but CFC-11 is less costly, easier, and faster than substitutes.

Dismally, it’s not only China. There are additional increases of CFC-11 detected from other parts of the world that have not yet been specifically identified. Those signals come from parts of Asia, Africa and South America.

According to the most recent Scientific Assessment of Ozone Depletion: 2018, Executive Summary, commissioned by the World Meteorological Organization, the UN Environment Programme, NASA, NOAA, and the European Commission: “There has been an unexpected increase in global total emissions of CFC-11. Global CFC-11 emissions derived from measurements by two independent networks increased after 2012, thereby slowing the steady decrease in atmospheric concentrations reported in previous Assessments.”

As for the timing of CFC’s impact on ozone molecules, there’s a lag effect, meaning it takes two to five years for CFC molecules to become exposed to ultraviolet radiation, resulting in chlorine molecules that then seek and destroy ozone molecules. Zap!

It’s the chlorine from CFC-11, as well as similar molecules, collectively referred to as chlorofluorocarbons that destroy thousands of atmospheric ozone molecules per chlorine atom. Therefore, disproportionately, one chlorine atom searches, finds, and zaps thousands (1000s) of ozone molecules; keeping in mind the fact that one atom is a sub-component of a molecule.

Appallingly, and sure enough, chlorine atoms have been turned loose once again to feast on precious ozone molecules located at 6 miles to 30 miles altitude, widely dispersed hither and thither to an extreme.

Remarkably, if all of the ozone molecules that are scattered in a 24-mile zone of atmosphere could be squeezed together into an encircling dome over Earth, it would be no more than the thickness of one copper penny. It’s true!

All of which brings to mind the astounding realization that the planet is, and always has been, very resilient over millennia of earthquakes and asteroid collisions but in certain crucial aspects, meaning life support systems, it can be dreadfully fragile.

Are cheaper consumer goods really worth it?