About 40% of Greenland experienced melting in the last week alone.

When Steffen Olsen, a scientist with the Danish Meteorological Institute (DMI), recently encountered an unusual problem while monitoring sea ice and ocean conditions in Greenland’s Inglefield Gulf, he quickly took a photo of the shocking scene.

In the image, which has since gone viral, his sled dogs are seen trudging through melted water on top of an ice sheet in northwest Greenland.

The photo captures the worsening impact of climate change on melting glaciers in Greenland. Although Greenland experiences melting from June to August, with most of the melting taking place in July, this year has already witnessed massive amounts of ice loss.

About 40% of Greenland experienced melting on June 13 — the day Olsen took the photo — with more than 2 billion tons of ice melting, according to recent estimates.

“Last week saw the onset of very warm conditions in Greenland and in fact much of the rest of the Arctic, driven by warmer air moving up from the south,” Ruth Mottram, a climate researcher at the DMI said in an emailed statement. “Given how warm it was it’s easy to see why there was a lot melting!”

Because the ice in the area forms reliably and in thick layers, there are few fractures in the ice through which the melted water can drain, Mottram explained, leading to the phenomenon seen in Olsen’s photos.

Olsen, who works closely with local communities in the town of Qaanaaq, considers the rapid melting to be a threat for the indigenous communities that live in the region.

“Communities in Greenland rely on the sea ice for transport, hunting,and fishing. Extreme events, here flooding of the ice by abrupt onset of surface melt call for an increased predictive capacity in the Arctic,” Olsen tweeted.

@SteffenMalskaer got the difficult task of retrieving our oceanographic moorings and weather station on sea ice in North West Greenland this year. Rapid melt and sea ice with low permeability and few cracks leaves the melt water on top. pic.twitter.com/ytlBDTrVeD

Olsen’s alarming photos were taken during an expedition to retrieve equipment the DMI uses to monitor sea ice and ocean conditions, which was placed on the sea ice last winter. The team typically retrieves the equipment around this time of the year, before summer truly peaks and the ice begins to melt and break up starts melting “in order not to lose what are pretty expensive instruments into the ocean,” Mottram said.

The DMI weather station registered a high of 17.3 degrees Celisus on Wednesday and 15 degrees Celsius on Thursday, a high temperature for Greenland, even in the summer. Given the usual weather conditions and terrain, dog sleds are still the most practical way to reach these areas, but the melting ice conditions pose a challenge to the sleds, Mottram said.

Mottram added that it is too soon to conclude how much of the melting event was caused by rising global temperatures because, even though temperatures were unusually high, the conditions were not unprecedented.

“This week’s warming is still a weather-driven extreme event, so it’s hard to pin it down to climate change alone,” she said, noting that the DMI is still working on quality control of these numbers.

Scientists have predicted a record year for melting on the Greenland ice sheet. While previous melt periods occurred in 2007, 2010, and 2012, “we didn’t see anything like this prior to the late 1990s,” Thomas Mote, a research scientist at the University of Georgia who studies Greenland’s climate, told CNN last week.

This higher-than-usual rates of melting could have an amplifying effect on sea level rise, a direct consequence of climate change, which could further threaten and displace millions of people living in coastal communities.

“Greenland has been an increasing contributor to global sea level rise over the past two decades,” Mote said, “and surface melting and runoff is a large portion of that.”

If all of Greenland’s ice sheets completely melted, global sea levels could rise by 23 feet, enough to displace billions of people globally.

Experts say that the effects of early melting could be cumulative and more ice could be lost in the future as ice and snow are better adapted to deflecting the sun’s rays and absorb less heat than water. An increase in ice loss could result in more heat absorption that could cause further melting.

Mottram added that the forecasts predict the warm conditions over Greenland would persist at least for another few days, so the dog sled teams will continue to face these challenging conditions. 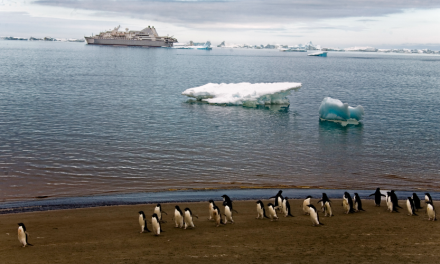