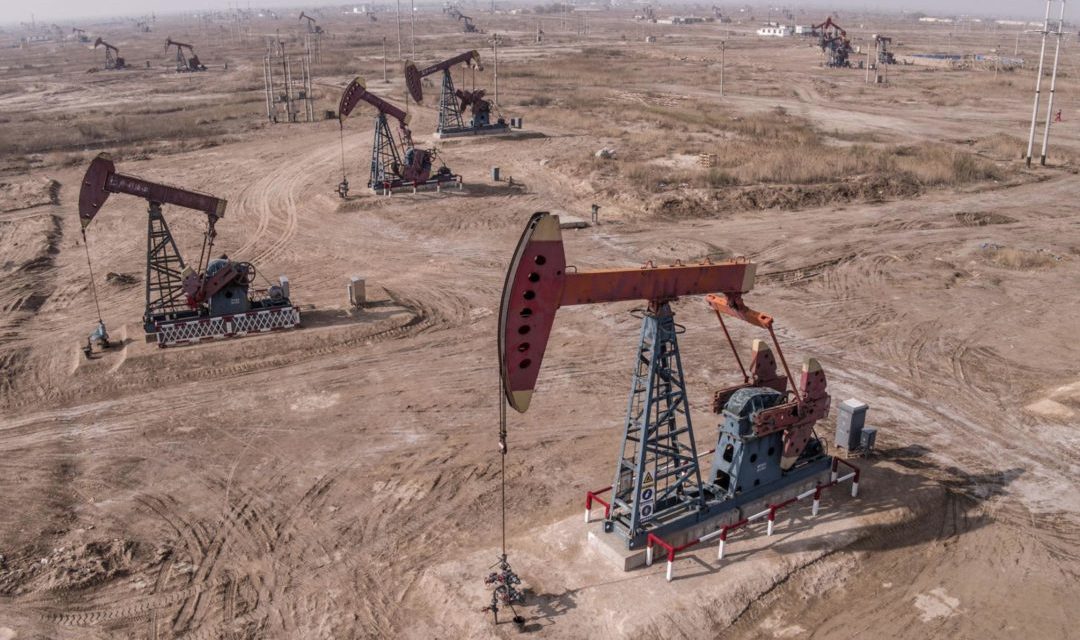 All major fossil fuel-producing nations—including the United States and China—planned to greatly increase production of oil, gas, and coal in the next decade, all but guaranteeing they will miss their climate goals set under the Paris Climate Agreement. An oil field in China is pictured here. PHOTOGRAPH BY GEORGE STEINMETZ, NAT GEO IMAGE COLLECTION

A new study in Nature (April 2020) casts a disturbing light on the prospects of abrupt ecosystem collapse. The report analyzes the probabilities of collapsing ecosystems en masse, and not simply the loss of individual species (Source).

The paper states that a high percentage of species will be exposed to harmful climate conditions at about the same time, potentially leading to sudden and catastrophic die-offs of biodiversity. If high greenhouse gas emissions remain in place, abrupt events are forecast to begin before 2030 in tropical oceans and spread to tropical forests and temperate regions over time.

Without doubt, no nation is prepared for the consequences of collapsing ecosystems nor are they doing anything to avert it. Yet, it is all about the quintessence of life on the planet.

There is a high probability that fossil fuel emissions will not be curtailed enough in enough time to prevent abrupt ecosystem collapse(s). Sufficient mitigation efforts to slow down carbon emissions are not happening, not even close.

Regrettably, the International Energy Agency (IEA) projects future usage of fossil fuels that look an awful lot like “the reverse” of rapid emission mitigation with plans afoot by the U.S., Russia, Saudi Arabia, and other major producers to increase fossil fuel production by 120% by 2030, and China and India have elaborate, surprisingly huge, plans to increase usage of coal. All of which portends big-big-big trouble down the pike. Of course, it’s a crushing blow to the Paris ‘15 climate accord (Source1, Source2).

More to the point, worldwide carbon emissions were 36.8 billion tons in 2019. By way of an historical context, when nature traversed its own course 55 million years ago, similar levels of emissions, in the aggregate, cranked temperatures up by 5C, but it took centuries and centuries to achieve.  That level of temperature today would take civilization down to its knees.

Back in the day, 55 million years ago, the annualized rate of carbon emissions by nature on its own accord was 1.1 billion tons per year but spread out over a few thousand years. Today world economies emit more than 36 billion tons per year. That’s as much carbon in 1 year as 30 years of emissions generated by nature on its own 55 million years ago, when sea levels rose by 50 feet. Hmm.

More to the point, today’s rapid growth 30xs faster does not allow time for ecosystems to adapt, especially when compared to the drawn-out affair of a few thousand years 55 million years ago. Of significance, back then, ecosystems had enough time to adjust to a hotter planet.

Nowadays, ecosystems have no chance of adjusting because of hyper-speed emissions thirty times faster than the paleoclimate record of 55 million years ago. In turn, that prompts some level of contemplation about the bitter truth that the planet was not designed for 7 billion people in the first instance, but that’s a much longer story.

In fact, clarifying the point even further, the Human Footprint consumes 1.75 Earths. Therefore, and because the biosphere is overused and overly abused, at its margins the planet is ultra-sensitized to the repercussions of human activity. In turn, this gives rise to collapsing ecosystems that are crucial for life support throughout the planet. Oops! Without viable ecosystems, life ends.

Meantime, the initial stages, or early warning signals, of abrupt ecosystem collapse are already happening in real time. A prime example is the Great Barrier Reef suffering its worst coral bleaching on record because of too much planetary heat. February of 2020 saw the most extreme ocean temperatures at the Great Barrier Reef since records began in 1900.

Consider this – for the first time in recorded history, severe bleaching, which kills coral outright caused by excessive levels of heat, hit all three major regions of the Great Barrier Reef, the northern, central, and southern portions. That’s unprecedented and should scare the daylights out of anybody and everybody. It’s a startling example of anthropogenic-generated global heat at work at the margins of the planet and likely marks the beginning of ecosystems collapsing en masse.

There is no stronger signal of serious trouble for the planet than 3 consecutive massive bleachings of the Great Barrier Reef within only 5 years, as ocean temperatures hit all-time recorded highs. That’s a no-brainer.

The implications are downright scary. The fact that collapse is already underway in real time today should be enough evidence to bring world leadership together to take advantage of “coronavirus-forced downtime” to reorganize the world economy around planet-friendly eco economics and drop, like a hot potato, the neoliberal brand of capitalism of the past 40 years.

But still, getting real, what can be done?

Only a worldwide Marshall Plan can save civilization, as it is currently constituted, but maybe not, some say it’s too late. Still, there’s no competent leadership, with vision, in the world to take charge. After all, high-end capitalism forged a new brand of leadership, as it depends upon iron-fisted tyrannical leadership to survive its obvious foibles, and there are many!

However, even in a world of perfect leadership, or even imperfect leadership but smart and informed, and based upon real science, a sober-minded (studious and logical) leader would toss out neoliberalism in favor of eco economics in a NY minute as a rescue-line to the planet.

Meanwhile, according to the above-referenced Trisos ecosystem study: “Keeping global warming below 2°C effectively ‘flattens the curve’ of how this risk to biodiversity will accumulate over the century,” said co-author Dr Alex Pigot from UCL, “providing more time for species and ecosystems to adapt to the changing climate” (Source).

Since studying climate change/global warming for over a decade, it’s readily apparent that it is careening down a path of doomsday-type events. Its trajectory is clearly up, up, and away. Accordingly, horrific problems could ensue unexpectedly – for example, abrupt loss of adequate food resources due to mid/lower latitude agriculture collapse under the stress of too much global heat.

Ecosystem collapse is already evident. The Fertile Crescent (Middle East) where Western Civilization started, is rapidly disappearing as a breadbasket because of: (1) severe droughts and (2) stupid human mismanagement of natural resources. Portions of eastern and southern Mediterranean landmass are drying up faster than anywhere else on the planet. Hence, eco migrants commit to arduous pathways to Europe, in time morphing into a retro Mad Max world.

A planet that transitions from a healthy source of natural resources to a bruised limp shell of its former self is potentially much more deadly than coronavirus, which is merely one more example of an abrupt happenstance (Black Swan) that nobody expected, as it happened all of a sudden, out of the blue.

Abrupt ecosystem collapse is similar to coronavirus in some aspects but dreadfully different and much more sinister in many others.

Postscript: “The main finding that surprised us was how much biodiversity is at risk in the first half of this century,” said Dr Christopher Trisos, senior researcher at the African Climate & Development Initiative at the University of Cape Town (UCT). “The risk doesn’t accumulate gradually, but can go from low risk to high risk within a decade. This abruptness of risk was really a shocking finding for us.”