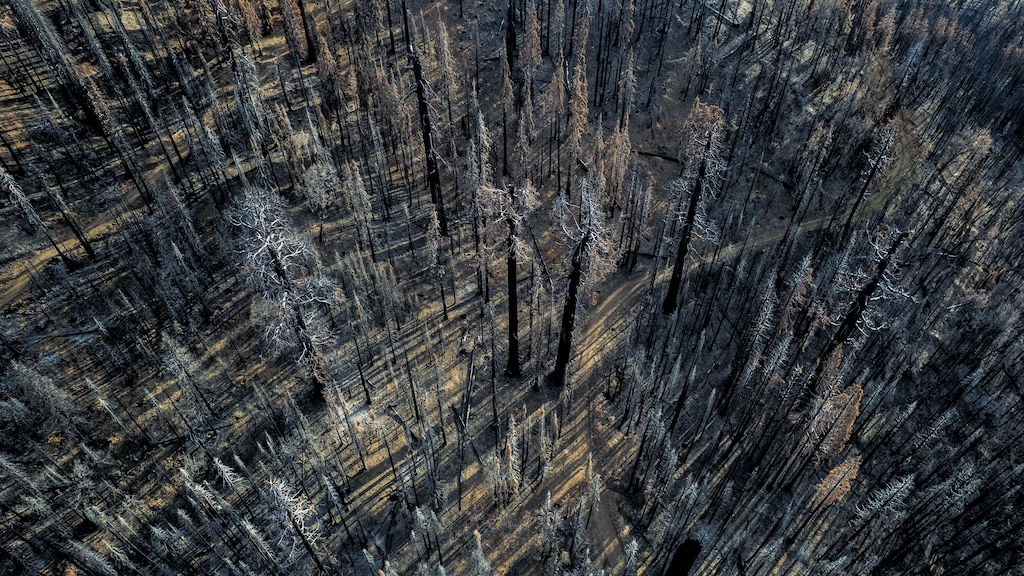 A long time ago, in the Milky Way galaxy on a planet named Earth, the trees died. It only happened once in the planet’s history. It was during the Permian-Triassic 252 million years ago.

Henk Visscher, PhD, Department of Earth Sciences, Utrecht University makes a living studying exposed fossil beds of the transitional period of the Permian to Triassic era, aka: “The Great Dying.” Significantly, layers of fossils prior to the great extinction event contain lots of pollen, typical of a healthy conifer forest. But, in the Permo-Triassic boundary the pollen is replaced by strands of fossilized fungi, representing an exploding population of nature’s scavengers feasting on dead trees.

“Visscher and his colleagues have found elevated levels of fungal remains in Permo-Triassic rocks from all over the world. They call it a ‘fungal spike.’ The same rocks yield few tree pollen grains. Visscher’s conclusion: Nearly all the world’s trees died en masse.” (Source: The Permian Extinction – When Life Nearly Came to an End, National Geographic, June 6, 2019)

“The upshot, scientists figured out in just the past decade, is that many trees in most landscapes, from the hot, rainy Amazon to cold, dry Alberta, are operating at the limits of their hydraulic systems, even under normal conditions, with little safety margin. That means a hot drought can push them over the threshold. The 2002 drought in the Southwest did exactly that: Tree-ring records would later show it was the driest and worst year for growth in a millennium. No other year even came close.” (Source: The Future of Forests, National Geographic, April 14, 2022)

“From the Amazon to the Arctic, wildfires are getting bigger, hotter, and more frequent as the climate changes… In many places, forests are no longer regenerating. Some of the world’s most significant stands are instead transitioning to something new. Some will never be the same. Others may not come back at all,” Ibid.

Trees throughout the world are vulnerable to excessive heat. A warmer atmosphere sucks more moisture from plants and soil. During droughts, trees close pores in leaves, called stomata, or shed leaves entirely, which limits CO2 uptake, leaving trees both hungry and parched all at once.

When soil gets dry enough, trees can no longer maintain pressure in the internal conduits that carry water up to their leaves. Air bubbles interrupt the flow, causing fatal embolisms (obstructions).

Even though the planet has 3, 000,000,000,000 (3T) trees and 10,000,000,000 (10B) acres of forests, scientists are increasingly concerned with the quickening pulse of extreme climate events that essentially prevent forest regeneration such as fire, extraordinarily powerful storms, insect infestations, and most notably, severe heat and drought, all unique to today’s climate change environment.

Climate change undercuts trees in various ways, for example, yellow cedars in Alaska are freezing to death because of early snow melt due to global warming. As the trees lose their snow-cover warming blanket, recurring cold snaps kill them by the thousands. At Africa’s Sahel (SW Morocco) heat and drought has killed 20% of the trees. And, according to the most recent IPCC report, 5-out of-8 of the most abundant tree species in America’s West have significantly declined since 2000.

Camille Stevens-Rumann, a forest ecologist at Colorado State University, examined 1,485 sites from 52 fires in Colorado, Idaho, Montana, and Washington. The number of burned sites that didn’t recover jumped from 19% before 2000 to 32% thereafter. “And by ‘not recovering,’ I mean not a single tree—not one,” Ibid.

Craig Allen, a landscape ecologist, has been warning of danger to trees for the past 20 years: “All this awakened Allen to what he now sees as a grave global threat. ‘Seeing the transformation of this landscape that I’d studied my whole adult life … climate change wasn’t theoretical anymore’…  He started tracking the mass mortality events elsewhere. Over the next two decades, heat and drought would kill billions of trees directly and indirectly—in Spain, in South Korea, throughout Australia. In central Siberia, Russia lost two million acres of firs. In Texas in 2011, drought killed more than 300 million trees—one out of every 16 in the state,” Ibid.

Tree deaths skyrocketed when the worst drought in 500 years hit central Europe in 2018. Summer temperatures hit nearly 6°F above average. Additionally, from 2018 to 2020 in Germany 750,000 acres of forest died because of excessive heat.

Majestic sequoias in the Far West that have stood the test of time as far back as Julius Caesar’s reign (100-44BC) are under attack. For eons the giants withstood every type of disaster until the Castle fire in August-December 2020 tore through Sequoia National Park, igniting one crown after another. Forest ecologists had never seen anything like it. Up to 14% of large sequoias in the Sierra Nevada were killed or mortally wounded.

Why did the majestic sequoias succumb to a disaster for the first time in centuries? Climate change/global warming was clearly the protagonist. A severe dry spell in the surrounding area had previously killed millions of sugar pines, incense cedars, and white firs in densely packed forests nearby the sequoias where the Castle fire started, which erupted into an inferno like nobody had ever experienced.

A second fire hit a year later in 2021: “The 2021 fires claimed another 3 to 5 percent of large sequoias. Up to 19 percent of these magnificent trees—trees that had weathered everything for a millennium or more—had been lost in just two years,” Ibid.

In that regard, it’s well known that surging growth rates of CO2 and Ch4 are preventable but politically foreordained.