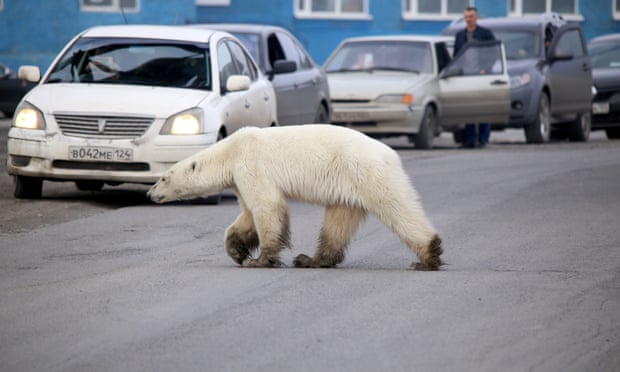 The polar bear on the streets of Norilsk. Photograph: Zapolyarnaya Pravda/The Siberian Times

MOSCOW (Reuters) – A starving polar bear has strayed hundreds of kilometers from its natural Arctic habitat and wandered, exhausted, into the major Russian industrial city of Norilsk in northern Siberia.

The female bear, visibly weak and seemingly ill, lay despondently on the ground for hours on Tuesday in Norilsk’s suburbs, its feet caked in mud, occasionally rising to sniff around for food.

It is the first polar bear seen in the city in more than 40 years, according to local environmentalists.

Oleg Krashevsky, a local wildlife expert who filmed the polar bear close-up, said it was unclear what had brought the animal to the city, although it was possible it had simply got lost. He said it had watery eyes and could clearly not see well.

Climate change has been damaging polar bears’ sea-ice habitats and forced them to scavenge more for food on land, bringing them into contact with people and inhabited areas.

A state of emergency was declared in a remote inhabited area of northern Russian earlier this year when dozens of hungry polar bears were seen scavenging for food and entering public buildings and homes.

State wildlife experts are expected to arrive in Norilsk on Wednesday to assess the bear’s condition.

Local residents in the city known for nickel production came out to photograph the bear and look at it as police prevented them from getting too close.

Krashevsky said it was not clear what would be done with the polar bear as it looked too weak to be taken back to its natural habitat.

What Are Eggs For?