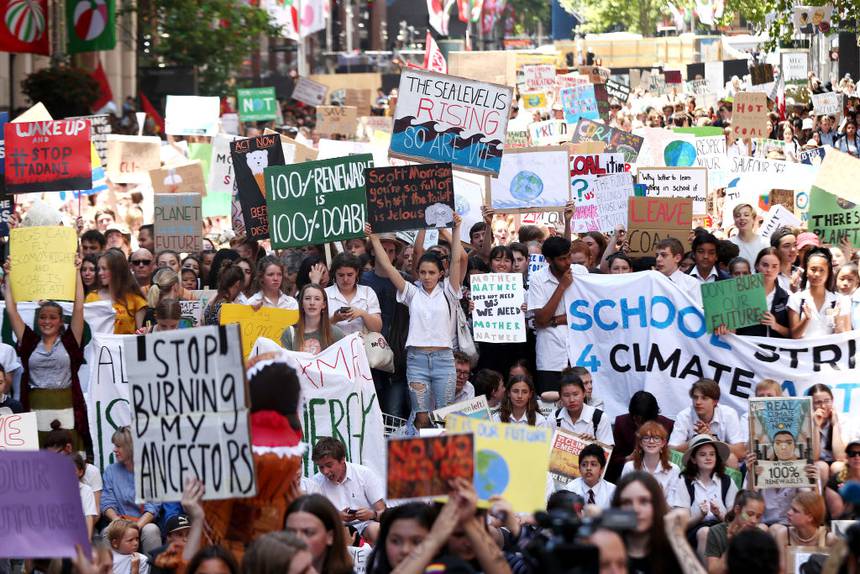 Some people have to work, but they can still show solidarity.

A lot of people are planning to participate in the Global Climate Strike on Friday, 20 September; as Bill McKibben notes in the Guardian,

It is shaping up to be the biggest day of climate action in the planet’s history: everyone from big trade unions to a thousand workers at the Amazon headquarters, and from college kids to senior citizens, are setting the day aside to rally in their cities and towns for faster action from our governments and industries.

But there are probably a lot more people who have to show up at work because they have no choice about striking. As McKibben admits, “Many people, of course, can’t do without a day’s pay, or work for bosses who who would fire them if they missed work.”

So the TreeHugger team has put together some suggestions for those who can’t take the day off work but want to do something.

© Phila.bikes/ how to dress for walking

I have also written that “the bike is a serious tool for climate action. They are cheap, they take up less space and have less embodied carbon than any other mode of transportation other than shoes.”

Kelly Garbato — What do vegans eat? (a humorous diagram)/CC BY 2.0

It might be hard to go vegan full-time, but not for just one day, and there are lots of choices. Katherine has written that Cutting out meat and dairy is the best thing you can do for the planet, writing that “going vegan offers far greater benefits than quitting flying or driving an electric car.” I am not convinced and believe giving up the car has more impact, but only if you replace it with walking or biking; see point 1.

Read all our posts tagged vegan.

3. Bring your lunch to work

Katherine notes that “takeout food makes life easier, but it’s hard on the planet, with all those plastic containers used only for a brief time and then thrown away. ” So brown-bag it for climate action and go zero waste.

4. Make it a buy nothing day

First of all, this is because we really only want to shop in the kinds of stores that are supporting the Climate Strike, and we should be boycotting the ones that don’t. But it’s also because of the footprint of all that shopping. Last year, the Buy Nothing Day people said, “When the existential threat of climate change breathes down our necks, and EXTINCTION REBELLIONS break out everywhere, millions of us around the world will opt out of Black Friday shopping and go on a 24-hour consumer fast instead!” Climate Strike Day should be our new consumer fast.

5. Turn out the lights

It’s still summer for another two days. If you have a window and access to natural light, go sit by it and soak in it. A little less carbon will be emitted somewhere, and it is a visible statement of climate action. In New York City, the Building Energy Exchange promotes daylight hour in June to promote the use of natural light (and the reduction in power usage). It’s a good idea on Climate Strike Day too.

They can make you show up at work, but they can’t make you wear petrochemicals. Reading Katherine’s post Which fabrics are most sustainable? it appears that linen comes out on top, although it is not perfect. (It seems nothing is.) Maybe find something you bought second-hand.

This is kind of all-encompassing: turning out lights, not using motorized transport, eating cold food, thinking about everything you do in terms of its carbon footprint. Everything we do has one; Rosalind Readhead tells us that even the energy used for a tweet puts out .02 grams of carbon dioxide.

Every little bit helps; if you can’t strike for climate action, you can do something. And go out at lunchtime and join the crowds; check here to see who is doing what, where.