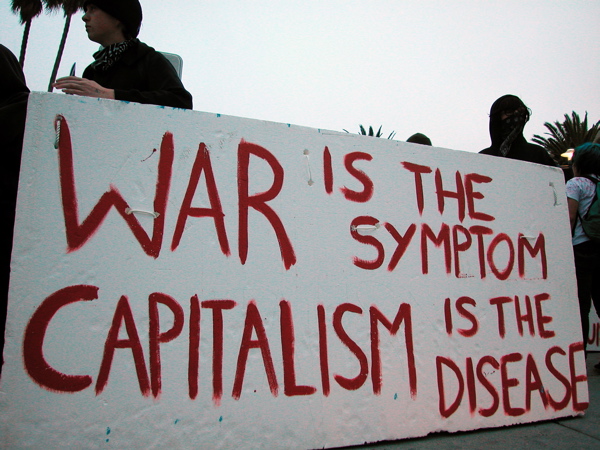 During the Cold war, the major antagonists, United States and Soviet Union, faced one another at European borders. No military confrontations occurred between them. Their cooperation, in a war to end all wars, had a brief interlude, and succeeding years detected huge losses of lives in endless conflicts.

The Cold War atmosphere became a testing ground for two systems. The capitalist system gained economic and political victories, but at what cost? A fundamental question emerged from the rhetoric and saber rattling — which system, capitalist or socialist, was more likely to contain peace, or stated another way, more likely to wage war? Examination of the conflicts occurring during the Cold War provides a clue and answers another lingering question. “Does Capitalism mean war?”

A chart of the history of major wars during the 1946-1991 era tells a story. Years succeeding the collapse of the Soviet Union and its communist system add to the story. A review of economic warfare completes the picture.

The chart describes major and local wars from 1946 to 2019 with the following criteria:

Peruse the chart, absorb the immense scale of conflicts, and then read the summary.

(1) The Soviet Union fought wars with Afghanistan and China. In the Afghanistan war, the Soviets intended to maintain a communist and friendly government. The China conflict resolved a long-lingering border dispute.
(2) In major wars, where both the United States and Soviet Union intervened — Korea and Vietnam — the Soviets mainly supplied weapons and aircraft. By not committing ground troops, the Soviet Union tempered its aggressive nature in the conflicts and had few casualties.
(3) Warsaw Pact allies interfered in the uprisings of two countries — Hungry, and Czechoslovakia — both of which were in the Warsaw Pact and the Socialist orbit.
(4) The Soviet Union and Cuba interfered in one civil strife outside of the recognized Warsaw Pact sphere of influence — Angola — and supported one faction in that Civil War

(1) China fought several major wars — Tibet, Sino/Vietnam, Sino/Indian, and Sino/Soviet. In the Sino/Vietnam war, China invaded Vietnam in retaliation to Vietnam’s aggression against Cambodia. The two latter conflicts were long-simmering border wars with neighboring nations. In the Tibet invasion and annexation, China claimed a historical attachment of Tibet to China. More likely. China took advantage of a weak Tibet and incorporated it to prevent Tibet from allying with a nation that was antagonistic to China — India or the United States. The wars and annexation did not involve the Soviet bloc.
(2) The Chinese military entered the Korean War after U.S. troops moved close to the Yalu River, which is a natural border with China. China dedicated a massive number of ground troops to the campaign.
(3) China assisted North Vietnam with war materials and construction manpower in the early years of the war, which stopped entirely after the Soviet Union made similar commitments to the North Vietnamese.

(1) In major hostilities, the United States allies (France and Great Britain) initiated the Suez war against Egypt after Nasser nationalized the Suez Canal (U.S. President Eisenhower resolved the conflict in favor of Egypt), the United States and allies initiated and fought with military might in the 1st Gulf war with Iraq after Saddam Hussein invaded Kuwait, and the U.S. air force engaged in extensive bombings of the Libyan capital in response to suspected Libyan attacks on U.S. civilians and off-duty troops.
(2) The United States and its allies intervened, with all military might, in the Korean and Vietnam civil wars. In both wars, which had massive casualties, U.S. miliktary dominated the fighting by the coalition forces.
(3) In another major war — between Iraq and Iran — U.S. participation was mainly logistic and patrol of the adjacent seas. Although the U.S. sold arms to Iran, in an arms for hostages deal, assistance to Iraq and hostile actions, such as the downing of an Iranian passenger plane, caused damage and loss of life to the Iranians.
(4) U.S., and/or its western allies interfered in civil strifes and uprisings in Indo-China (France), Kenya (Great Britain), Angola (U.S.), Algeria (France), Nicaragua (U.S.), Salvador (U.S.), Congo (U.S. and Belgium). and Chad (France),
(5) U.S. intervened to replace governments in Cuba, Guatemala, Chile, Grenada, Dominican Republic, Panama, and Brazil.
(6) U.S. covertly assisted the Afghan Mujahideen through Pakistan intelligence. Result of Afghan-Russian war — rise of Osama bin Laden and al-Qaeda and installation of Taliban regime.

After the Breakup of the Soviet Union

(1) Citing humanitarian reasons, U.S. and NATO intervened in the Libyan, Bosnian and Kosovo conflicts, providing aerial bombardments that determined the outcomes of these conflicts. At no time was either Yugoslavia or Libya a threat to the U.S. or any NATO nation.
(2) Based on purposefully misdirected intelligence, the U.S. invaded Iraq and replaced the Saddam Hussein regime.
(3) After the September 11, 2001 terrorist attacks, the United States, with NATO assistance, invaded Afghanistan, replaced the Taliban regime and started a protracted civil war.
(4) A U.S. humanitarian mission turned into battles with militias in Somalia.
(5) U.S. military sales to Saudi Arabia and logistic assistance have enabled the Saudi Kingdom to pulverize the Yemenite Houthi population.

Economic warfare must be considered equal to military war. Warfare is visualized in terms of dead soldiers, battlefield blood, eerie noises, and bombed-out structures. Warfare can be silent and still be deadly. The country that takes the offense becomes the aggressor, and the destruction to the defending state is equally brutal. In most cases, the economic war is a one sided battle; the civilian population of the defending nation suffers greatly and the aggressor country suffers few losses.

The communist Soviet Bloc did not engage in any economic warfare.

Since World War II, the United States embargoed and sanctioned more than 35 countries in economic warfares. Start with Iran; then wander around the map to Libya, Nicaragua, Burma, Sudan, Iraq, Cuba, Liberia, North Korea, Rwanda, Sierra Leone, Somalia, Yugoslavia and other countries. Economic warfare, of which sanctions are one part, intentionally reduces living standards and promotes starvation. By starving and debilitating a population in order to gain economic or political advantage, economic warfare is a major crime and a form of terrorism.

The most punishing sanctions by the United States, until the 2012 sanctions against Iran, had been against Cuba, North Korea, and Iraq. Iran has replaced Saddam Hussein’s Iraq as the most sanctioned nation on the globe.

The results of the analysis indicate that Socialist nations are not immune to engaging in war. However, the engagements were minimal and not intended to increase their hegemony. In one virulent war, the Soviet Union tried to maintain another nation — Afghanistan — in its orbit, and caused severe consequences to itself. The Soviet Bloc militarily assisted other communist nations in distress — North Korea, North Vietnam, Cuba, and Angola — but did not participate with its soldiers in the ground wars. Interferences in uprisings of other nations were localized to nations of the Warsaw Pact — Hungary and Czechoslovakia. The Socialist Bloc never intervened beyond its borders to convince newly struggling nations to become socialist or tried to overthrow existing governments.

China acted as an aggressor in several wars, but not as part of adventure by the Socialist Bloc. Operating independently, China seized opportunities to satisfy historical grievances, or, in the case of the Korean War, defend itself against incursion upon its territory. Although reports have China’s leader, Mao Zedong, determined to have a “people’s war” within the pan-Asian Communist movement, no such conflicts ever occurred. China assisted the Vietnamese in the Indo-china war and supplied armaments and manpower for logistical support during the early years of the Vietnam War.

Claiming protection of interest, which were mainly economic and political, the Capitalist western nations went beyond their borders and homeland security interests and, often with apparent ease that eschewed compromise and diplomacy, initiated several violent and catastrophic wars — 1st Gulf, Vietnam, and Suez wars. In the Korean War, the United States and its allies invoked the UN charter. However, the intensity of the war, which went beyond containment, and its inconclusive resolution have clouded U.S. original intentions in fighting the war. Less violent, but more characteristic of capitalist western intentions were the many suppressions of uprisings and interferences in civil wars — Indo-China, Algeria, Kenya, Nicaragua, Angola, Salvador and Chad. Allied to the interferences were several interventions that either intended or succeeded overthrowing existing and legitimate governments and replacing them with leaders favorable to American political and economic interests — Cuba, Guatemala, Chile, Grenada, Dominican Republic, Panama, and Brazil.

After the dissolution of the Soviet Union, the Capitalist western nations displayed a militant and aggressive attitude that showed the Cold War was often used as an excuse for unrelated hostilities. As summarized previously. (1) U.S. battles with Somali militia, (2) U.S./NATO intervention that provided substantial air force attacks and determined the outcomes of the Libyan, Bosnian and Kosovo conflicts, (3) intention of subduing Osama bin laden and al-Qaeda after the 9/11 attack on American soil turning into a violent civil war that has lasted almost 20 years, (4) U.S. unnecessary invasion and occupation of Iraq, which caused a huge amount of casualties and destruction, and (5) U.S. support for Saudi Arabia, which has enabled the Saudi Kingdom to pulverize the Yemenite Houthi population, all point to a capitalism that will not exist without waging war. Add to the mix, the economic warfare that has decimated populations and the question “Does Capitalism Mean War?” leans to a positive response.

Not being definite arises from being unsure if it is the capitalist world waging war or only a temporary world power, United States. Well, France has continually interfered in African nations to protect its interests and NATO has subdued nations that contested western hegemony, and brought its forces to the border of an antagonist Russia. We may question if war is endemic to humanity and what would have occurred if the Socialist Bloc had been victorious in the Cold War and subdued the capitalist nations? Would the head honchos of the Socialist system behave aggressively to maintain their version of world order? The analysis, based on interpretation of events, provides a possible answer to the question, “Does capitalism mean war?” Logic reinforces a positive reply and answers the other questions.

The Socialist nations run on scarcity, which prevents them from engaging in damaging economic warfare. Because their production capability is limited by material and human resources, armaments, defense budgets, and foreign wars exhaust their resources and are not compatible with their operation. Honest Socialism, which is the only Socialism – perhaps ideal — is based on respect for sovereignty and fair trade.

Capitalist nations run on surplus, on capital eager to feed machines. If they can obtain the material resources, they can grow their economies and augment the markets to export the surplus. Military defense expenditures create jobs that relieve unemployment, heighten a profitable industry, and supply the muscle that captures resources and markets, and silences those who contest hegemony and protest against a dictated world order. .

Capitalism has benefits of more properly allocating resources and motivating workers, elements that enable it to recover from sputtering recessions, develop more rapidly and to greater limits. Socialism has elements of a more peaceful system that trudges slowly in a progressive direction, hampered by a bureaucratic led work force that is less able to organize itself at optimum efficiency. However, do the advantaged citizens in the Capitalist systems realize that their benefits may result from derogatory effects to others, from physical and economic wars that caused havoc throughout the world?

Should the expression, “Better Dead than Red” be replaced by “Better to Exist than be Capitalist?” or “Don’t Get Your Fill by Having to Kill.”

The Threat of War with Iran