Monarchs Belong in the Dustbin of History 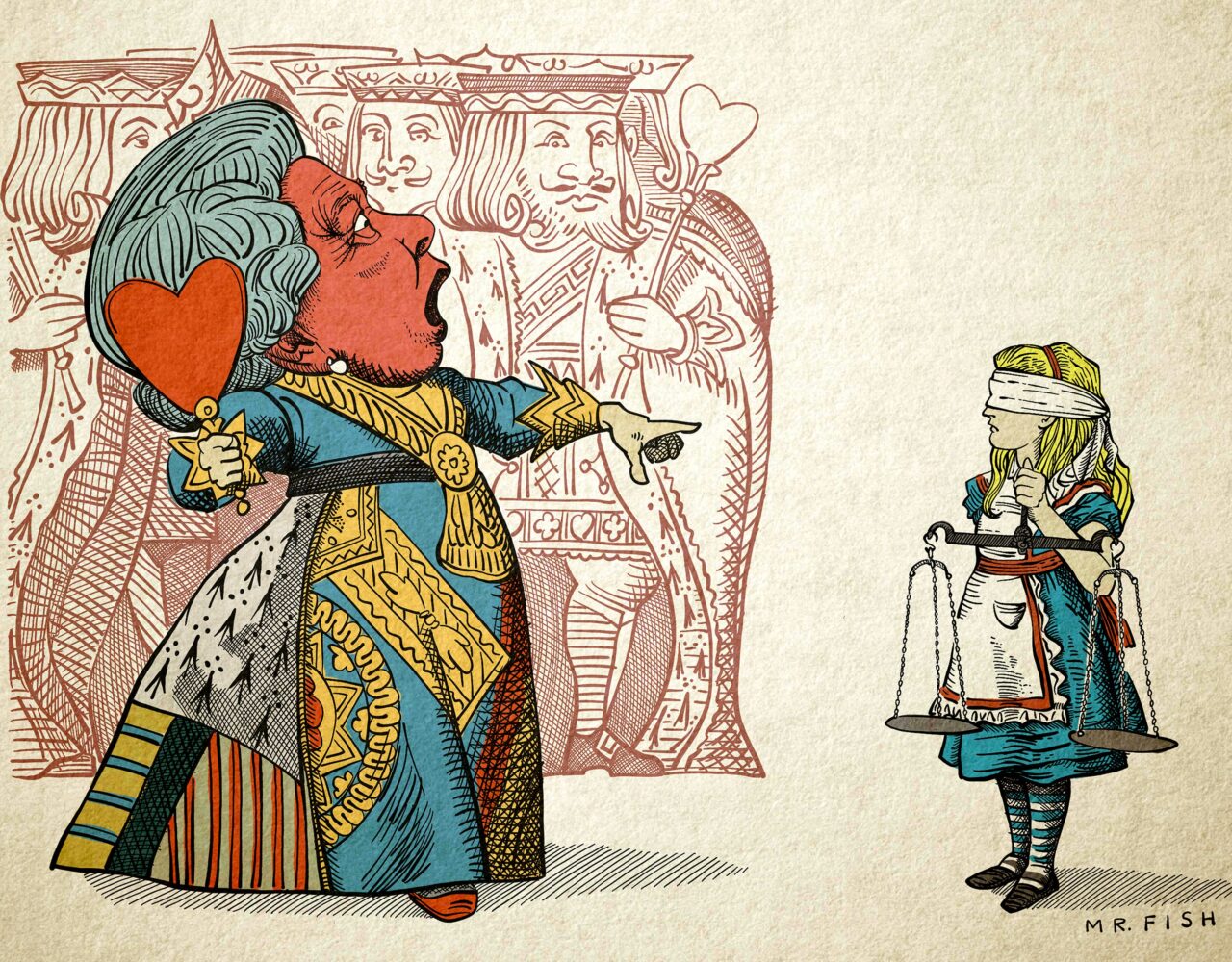 Off With Her Head - by Mr. Fish

No institution helps obscure the crimes of empire and buttress class rule and white supremacy as effectively as the British monarchy.

The fawning adulation of Queen Elizabeth in the United States, which fought a revolution to get rid of the monarchy, and in Great Britain, is in direct proportion to the fear gripping a discredited, incompetent and corrupt global ruling elite.

The global oligarchs are not sure the next generation of royal sock puppets – mediocrities that include a pedophile prince and his brother, a cranky and eccentric king who accepted suitcases and bags stuffed with $3.2 million in cash from the former prime minister of Qatar Sheikh Hamad bin Jassim bin Jaber Al Thani, and who has millions stashed in offshore accounts – are up to the job. Let’s hope they are right.

Monarchy obscures the crimes of empire and wraps them in nostalgia. It exalts white supremacy and racial hierarchy. It justifies class rule. It buttresses an economic and social system that callously discards and often consigns to death those considered the lesser breeds, most of whom are people of color. The queen’s husband Prince Phillip, who died in 2021, was notorious for making racist and sexist remarks, politely explained away in the British press as “gaffes.” He described Beijing, for example, as “ghastly” during a 1986 visit and told British students: “If you stay here much longer you’ll all be slitty-eyed.”

The cries of the millions of victims of empire; the thousands killed, tortured, raped and imprisoned during the Mau Mau rebellion in Kenya; the 13 Irish civilians gunned down in “Bloody Sunday;” the more than 4,100 First Nations children who died or went missing in Canada’s residential schools, government-sponsored institutions established to “assimilate” indigenous children into Euro-Canadian culture, and the hundreds of thousands killed during the invasion and occupation of Iraq and Afghanistan are drowned out by cheers for royal processions and the sacral aura an obsequious press weaves around the aristocracy. The coverage of the queen’s death is so mind-numbingly vapid — the BBC sent out a news alert on Saturday when Prince Harry and Prince William, accompanied by their wives, surveyed the floral tributes to their grandmother displayed outside Windsor Castle — that the press might as well turn over the coverage to the mythmakers and publicists employed by the royal family.

The royals are oligarchs. They are guardians of their class. The world’s largest landowners include King Mohammed VI of Morocco with 176 million acres, the Holy Roman Catholic Church with 177 million acres, the heirs of King Abdullah of Saudi Arabia with 531 million acres and now, King Charles III with 6.6 billion acres of land. British monarchs are worth almost $28 billion. The British public will provide a $33 million subsidy to the Royal Family over the next two years, although the average household in the U.K. saw its income fall for the longest period since records began in 1955 and 227,000 households experience homelessness in Britain.

Royals, to the ruling class, are worth the expense. They are effective tools of subjugation. British postal and rail workers canceled planned strikes over pay and working conditions after the queen’s death. The Trade Union Congress (TUC) postponed its congress. Labour Party members poured out heartfelt tributes. Even Extinction Rebellion, which should know better, indefinitely canceled its planned “Festival of Resistance.” The BBC’s Clive Myrie dismissed Britain’s energy crisis — caused by the war in Ukraine — that has thrown millions of people into severe financial distress as “insignificant” compared with concerns over the queen’s health.The climate emergency, pandemic, the deadly folly of the U.S. and NATO’s proxy war in Ukraine, soaring inflation, the rise of neo-fascist movements and deepening social inequality will be ignored as the press spews florid encomiums to class rule. There will be 10 days of official mourning.

In 1953, Her Majesty’s Government sent three warships, along with 700 troops, to its colony British Guiana, suspended the constitution and overthrew the democratically elected government of Cheddi Jagan. Her Majesty’s Government helped to build and long supported the apartheid government in South Africa. Her Majesty’s Government savagely crushed the Mau Mau independence movement in Kenya from 1952 to 1960, herding 1.5 million Kenyans into concentration camps where many were tortured. British soldiers castrated suspected rebels and sympathizers, often with pliers, and raped girls and women. By the time India won independence in 1947 after two centuries of British colonialism, Her Majesty’s Government had looted $45 trillion from the country and violently crushed a series of uprisings, including the First War of Independence in 1857. Her Majesty’s Government carried out a dirty war to break the Greek Cypriot War of Independence from 1955 to 1959 and later in Yemen from 1962 to 1969. Torture, extrajudicial assassinations, public hangings and mass executions by the British were routine. Following a protracted lawsuit, the British government agreed to pay nearly £20 million in damages to over 5,000 victims of British abuse during war in Kenya, and in 2019 another payout was made to survivors of torture from the conflict in Cyprus. The British state attempts to obstruct lawsuits stemming from its colonial history. Its settlements are a tiny fraction of the compensation paid to British slave owners in 1835, once it — at least formally — abolished slavery.

During her 70-year reign, the queen never offered an apology or called for reparations.

The point of social hierarchy and aristocracy is to sustain a class system that makes the rest of us feel inferior. Those at the top of the social hierarchy hand out tokens for loyal service, including the Order of the British Empire (OBE). The monarchy is the bedrock of hereditary rule and inherited wealth. This caste system filters down from the Nazi-loving House of Windsor to the organs of state security and the military. It regiments society and keeps people, especially the poor and the working class, in their “proper” place.

The British ruling class clings to the mystique of royalty and fading cultural icons as James Bond, the Beatles and the BBC, along with television shows such as “Downton Abbey” — where in one episode the aristocrats and servants are convulsed in fevered anticipation when King George V and Queen Mary schedule a visit — to project a global presence. Winston Churchill’s bust remains on loan to the White House. These myth machines sustain Great Britain’s “special” relationship with the United States. Watch the satirical film In the Loop to get a sense of what this “special” relationship looks like on the inside.

It was not until the 1960s that “coloured immigrants or foreigners” were permitted to work in clerical roles in the royal household, although they had been hired as domestic servants. The royal household and its heads are legally exempt from laws that prevent race and sex discrimination, what Jonathan Cook calls “an apartheid system benefitting the Royal Family alone.” Meghan Markle, who is of mixed race and who contemplated suicide during her time as a working royal, said that an unnamed royal expressed concern about the skin color of her unborn son.

I got a taste of this suffocating snobbery in 2014 when I participated in an Oxford Union debate asking whether Edward Snowden was a hero or a traitor. I went a day early to be prepped for the debate by Julian Assange, then seeking refuge in the Ecuadorian Embassy and currently in His Majesty’s Prison Belmarsh. At a lugubrious black-tie dinner preceding the event, I sat next to a former MP who asked me two questions I had never been asked before in succession. “When did your family come to America?” he said, followed by “What schools did you attend?” My ancestors, on both sides of my family, arrived from England in the 1630s. My graduate degree is from Harvard. If I had failed to meet his litmus test, he would have acted as if I did not exist.

Those who took part in the debate – my side arguing that Snowdon was a hero narrowly won – signed a leather-bound guest book. Taking the pen, I scrawled in large letters that filled an entire page: “Never Forget that your greatest political philosopher, Thomas Paine, never went to Oxford or Cambridge.”

Paine, the author of the most widely read political essays of the 18th century, Rights of Man, The Age of Reason and Common Sense, blasted the monarchy as a con. “A French bastard landing with an armed banditti and establishing himself as King of England against the consent of the natives, is in plain terms a very paltry rascally original…The plain truth is that the antiquity of the English monarchy will not bear looking into,” he wrote of William the Conqueror. He ridiculed hereditary rule. “Of more worth is one honest man to society, and in the sight of God, than all the crowned ruffians that ever lived.” He went on: “One of the strangest natural proofs of the folly of hereditary right in kings is that nature disproves it, otherwise she would not so frequently turn it into ridicule, by giving  mankind an ass for a lion.” He called the monarch “the royal brute of England.”

When the British ruling class tried to arrest Paine, he fled to France where he was one of two foreigners elected to serve as a delegate in the National Convention set up after the French Revolution. He denounced the calls to execute Louis XVI. “He that would make his own liberty secure must guard even his enemy from oppression,” Paine said. “For if he violates this duty, he establishes a precedent that will reach to himself.” Unchecked legislatures, he warned, could be as despotic as unchecked monarchs. When he returned to America from France, he condemned slavery and the wealth and privilege accumulated by the new ruling class, including George Washington, who had become the richest man in the country. Even though Paine had done more than any single figure to rouse the country to overthrow the British monarchy, he was turned into a pariah, especially by the press, and forgotten. He had served his usefulness. Six mourners attended his funeral, two of whom were Black.

You can watch my talk with Cornel West and Richard Wolff on Thomas Paine here.

There is a pathetic yearning among many in the U.S. and Britain to be linked in some tangential way to royalty. White British friends often have stories about ancestors that tie them to some obscure aristocrat. Donald Trump, who fashioned his own heraldic coat of arms, was obsessed with obtaining a state visit with the queen. This desire to be part of the club, or validated by the club, is a potent force the ruling class has no intention of giving up, even if hapless King Charles III, who along with his family treated his first wife Diana with contempt, makes a mess of it. 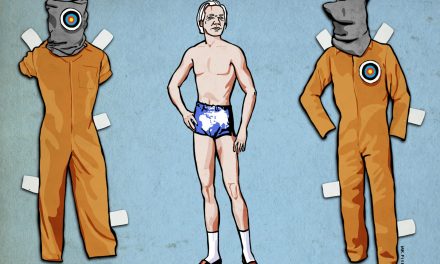 We Are Living Through a Time of Fear – Not Just of the Virus, but of Each Other