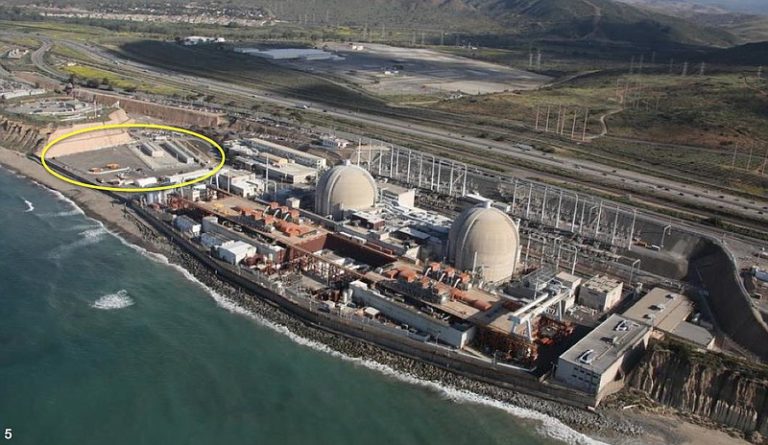 “The most toxic substance on Earth is separated from exposure to society by ½” of steel encased in a canister.” (Blanch)

What could possibly go wrong on the seashore?

At the outset of San Onofre’s plans for its 73 buried canisters, the Nuclear Regulatory Commission itself admitted: (1) the thin ½” stainless steel canisters could crack within 30 years, (2) there’s no current technology to inspect, repair or replace cracked canisters, and (3) limited monitoring means leaks may not be detected soon enough. (Source: Sanonofresafety.org) It is not believed the foregoing has changed one iota.

Unfortunately, when it comes to nuclear risks, what can go wrong isn’t known until it actually goes wrong.  Then, it’s too late. Which explains the contention of a professional group associated with publicwatchdogs.org that discussed issues of credibility and truthfulness of the US Nuclear Regulatory Commission at a public hearing on March 9th, 2021. More on that follows later.

The 73 San Onofre rectangular lids symbolize the final act of decommissioning San Onofre Nuclear Generating Station, remnants of 50 years of nuclear power. Nobody knows with any degree of certainty the consequences of highly toxic spent fuel rods buried within 108 feet of the ocean. Is it risky or not risky? Is it even possible to define the risk?

In truth, the risks of nuclear power cannot be adequately defined. Experience shows that the risk factors have no ceiling, no comparisons, no analogies, nothing similar, only disastrous results when things go wrong. More to the point, it’s a grand experiment of juggling the most potent substance on the planet. Like a hot potato, nobody knows what to do with it, other than bury it somewhere somehow that hopefully keeps it secure. Is a beachfront 108 feet off the ocean a good, secure location?

Still, given enough time, nuclear risks are defined via incidents, e.g., Fukushima, which exposed the consequences of failure to identify nuclear risks. If it were otherwise, Fukushima would’ve been better prepared. They weren’t!

According to Prime Minister Naoto Kan /Japan, 2011: “We did not anticipate such a huge natural disaster could happen.” At the tensest moments, PM Kan was briefed on plans for complete evacuation of Tokyo, a horrific beyond belief event that came far too close for comfort! Nowadays, the former PM is an antinuke protestor.

It’s worth noting that Fukushima houses 10 nuclear reactors and 11 open pools of water containing spent fuel rods.  If exposed to open air, spent fuel rods erupt into a sizzling zirconium fire followed by massive radiation bursts of the most toxic material known to humanity. It can upend an entire countryside and force evacuation of major cities, literally begging the impossible question of whether San Onofre’s remnants threaten all of Southern California?

Throughout America, nuclear facilities contain open pools of spent fuel rods. According to the widely recognized nuclear expert Paul Blanch: “Continual storage in spent fuel pools is the most unsafe thing you could do.” Some spent fuel rods have been removed and stored in dry casks, but what if the dry casks are buried 108 feet from the Pacific Ocean?  And, what of dry casks only ½” thick filled with radioactive spent fuel rods running a 500°F temp inside and 400°F on the canister’s exterior? By all appearances, it is an extremely lively affair!

That goes to the heart of questions posed at a recent Nuclear Regulatory Commission public hearing on March 9th. Thereupon, on behalf of the general public, three professionals drilled down into the procedures of the NRC whilst questioning its credibility. The bios of those three professionals:

Charles Langley, Executive Director of PublicWatchdogs.org, a public advocate with more than 25 years of experience in the field of energy law, energy policy, and utility rate setting.

According to publicwatchdogs.org, the NRC is a “captive regulator” that accedes to nearly every request for regulatory relief for the nuclear power industry, as well as relaxation of safety rules and enforcement for the industry, in fact, following the command of industry insiders. But, when it comes to the general public, the NRC summarily rejects nearly every public petition aimed at strengthening the rules or following enforcement of existing rules. The petition process at the NRC is a one-sided affair that leaves the public out in the cold. From 1975- 2012 there were 387 petitions filed under provisions of the code, only two granted substantive relief, and one of those was from the nuclear industry. So, over 37 years there were, in actuality, more like a thousand petitions submitted by the public, and only one made it. It should be noted that rejections of petitions cannot be appealed.

On the other hand, when an industry player makes requests, according to Paul Blanch, working for a public utility, asking NRC for “a deviation from the rules” on a phone call got approved within one hour.

As it happens, the field of play with the NRC is lopsided. Industry players can ask any questions of NRC, but the public can only ask “process questions,” which does not lead to adequate answers, if any answers at all. Moreover, according to publicwatchdogs.org: “The NRC is providing inaccurate and false information to the public… At issue is the fact that the NRC is claiming that a flooding event at the SONGS (San Onofre Nuclear Generating Station) Independent Spent Fuel Storage Installation or ISFSI is ‘non-credible’.”

Really? Non-credible? What does that mean?

According to publicwatchdogs.org: “ISFSI is an Orwellian word used by the NRC to describe a toxic beachfront nuclear waste dump containing a spent nuclear fuel depot that is deadly radioactive for 250,000 years. The SONGS “ISFSI” is located 108 feet from the beach, in a tsunami inundation zone next to an earthquake fault line. It contains 73 thin-walled stainless steel cans weighing upwards of 100,000 pounds each. Each 20-foot high canister contains the same amount of Cesium-137 that was released into the atmosphere during the entire Chernobyl event. The cans themselves are only guaranteed to last for 25 years.”

What happens if a king tide, during full moon, or tsunami strikes and triggers a loss of cooling for the containers? Therefore, publicwatchdogs.org demanded the NRC provide a realistic flood analysis, with consequences spelled out. But, according to the petitioners, the NRC has never analyzed a loss of cooling of the 73 buried canisters. That fact alone is beyond comprehension. How could they not? Will they now?

Furthermore, nobody can explain what happens with ruptured casks. The San Onofre casks are filled with helium gas with natural conduction airflow surrounding each individual container, which are thin casks ½” thick.

In all, Public Watchdog’s research found that NRC misrepresented information. At the hearing, petitioners exposed inept Nuclear Regulatory Commission processes, responses, and a lack of credibility, claiming the NRC is merely a rubber stamp for the nuclear industry and not at all responsive to public queries.

The following is a condensed version of the issues brought forth on the virtual meeting with the Nuclear Regulatory Commission:

It should be noted that NRC rejected the group’s Oct 13th petition on the dubious grounds of the term “not credible.” Failure or leakage of the canisters, according to NRC, is “not credible.” But “not credible” is not defined anywhere in NRC documents. Of course, no answers came at the scheduled meeting.

An important pursuit at the hearing was exposure of deficiencies of the Holtec Umax spent fuel storage system at San Onofre, as well as exposing its use at other locations in the US. Not only that but a king tide could wash over the canisters, no tsunami needed. A few feet of water would be disastrous.  Meanwhile, there are no contingency plans to remove flooded water from the canisters in an emergency. Which is insidiously irresponsible: “Each canister contains more radioactive cesium than released at Chernobyl, each of 73 canisters, plus there are over 3,000 in this country.” (Blanch)

The Holtec canisters provide a 1/2” to 5/8” barrier between the most toxic material in the world and a Chernobyl-size release of radiation. The canisters must be kept full of helium gas, welded shut, thus they can never be examined on the inside for cracks or leaks, and scandalously, not monitored for temperature, pressure, or radiation. But yet, the NRC says failure is “not credible.”

Was Chernobyl not credible?

Was Fukushima not credible?

Making matters worse, there’s no provision for drainage of water in the underground canisters. A king tidal wave could flood, and as water boils off, nobody would know what to do to save Southern California from some level of mass evacuation. Additionally, there are no provisions to refill the canisters with pressurized helium should pressure drop. These are obvious risks factors, plus: San Onofre is located within an inundation zone for tsunamis. It’s also close to Camp Pendleton, a legitimate enemy target.

“We regard the NRC’s preliminary decision to reject our petition as irresponsible and wrong and it places millions of people in Southern California at risk that is unquantifiable.” (Petitioners)

When NRC receives petitions, they can be rejected by an unspecified number of PRB members and the petitioner does not know if it’s only one member, a minority, a majority or whatever. No logical reasons are given for rejections of petitions and no supporting documentation.

The San Onofre canisters need to be removed and placed into thick-wall casks and transported to a new repository in New Mexico. “The biggest problem is the NRC failure to admit there is a problem.” (Blanch)

In the final analysis, the NRC abrogates its own mission statement, which is to license and regulate civilian use of radioactive materials to protect public health and safety to promote the common defense and security and protect the environment. Yet, by all appearances, the NRC is more akin to an emotionless Frankenstein monster that belittles detractors via evasion and disdain without any answers for credible questions. What a trip!