The germs are multiplying so rapidly that the number of deaths caused by drug-resistant infections could outpace those caused by cancer in the next three decades, according to a study funded by the British government. More than 10 million people worldwide could die from drug-resistant infections in 2050, surpassing the eight million projected to die from cancer, the study found.

Antibiotic resistance is sometimes attributed to the over prescription of antibiotics in hospitals and clinics. But the main driver is the use of human drugs in livestock raised on factory farms. Nearly 80 percent of antibiotics in the U.S. are administered to conventionally raised cows, pigs and chickens to promote growth and treat disease. This means exposing healthy animals to antibiotics over long periods of time.

The result is antibiotic-resistant bacteria that can be passed on to humans through the consumption of animal products or direct exposure to animal manure, which is often generously applied to farmland as a means to cope with the vast amount of waste produced by concentrated animal feeding operations (CAFOs).

A study published in the journal JAMA found that people living near pig farms or cropland fertilized with pig manure are 30 percent more likely to contract methicillin-resistant Staphylococcus aureus bacteria or MRSA.

In November 2018, Consumer Reports revealed that it detected a number of prohibited drugs in hundreds of samples of meat products sold in the U.S. Testing found ketamine, a hallucinogenic party drug, phenylbutazone, a dangerous anti-inflammatory, and chloramphenicol, a powerful antibiotic linked to potentially deadly anemia, in beef, poultry and pork products.

The findings highlight the need for stricter testing by regulatory agencies, as well as a transition away from drug-dependent factory farms to organic regenerative agriculture, which emphasizes soil health, holistic land management, animal welfare and farmworker fairness.

Dozens of bacteria and fungi have developed resistance

It’s not just bacteria that’s growing resistant to important medications. Reports of a new drug-resistant fungus have scientists at the U.S. Centers for Disease Control and Prevention (CDC) on edge.

Candida auris preys on people with a weakened immune system, affecting newborns, the elderly, diabetics and people with autoimmune disorders who take steroids which suppress the body’s immune system. The fungus is resistant to major antifungal medications and is quietly spreading around the globe, reports The New York Times.

So far, C. auris has reared its ugly head in a neonatal unit in Venezuela, hospitals in Spain and in India, Pakistan and South Africa. It also forced a “prestigious” British medical journal to close its intensive care unit.

And yes, the deadly drug-resistant fungus made its way to the U.S., too.

Evidence of C. auris has been reported in New York, New Jersey and in Illinois, prompting the CDC to place the fungus on its list of germs that are considered an urgent threat.

Last year, the fungus killed an elderly man who was admitted to the Mount Sinai Hospital in Brooklyn. According to the New York Times:

The man at Mount Sinai died after 90 days in the hospital, but C. auris did not. Tests showed it was everywhere in his room, so invasive that the hospital needed special cleaning equipment and had to rip out some of the ceiling and floor tiles to eradicate it.

“Everything was positive — the walls, the bed, the doors, the curtains, the phones, the sink, the whiteboard, the poles, the pump. The mattress, the bed rails, the canister holes, the window shades, the ceiling, everything in the room was positive.”

Fungicides may be fueling drug-resistant fungi

The fungus is one of dozens of dangerous bacteria and fungi that have developed resistance. Similar to how antibiotics are overused in livestock, scientists believe that overapplication of fungicides to prevent food crops from rotting may be contributing to drug-resistant fungi.

Farmers in the U.S. apply more than 100 million pounds of fungicides to about 17.7 million acres of cropland. Introduced in the 1940s, synthetic fungicides are sprayed on dozens of crops including corn, soybeans, wheat, almonds, apples, grapes, strawberries, blueberries, raspberries, citrus, lettuce, peanuts, potatoes and sugar beets.

The pesticide industry says fungicides increase fruit and vegetable yields by 50 to 95 percent, allowing growers to gain $12.8 billion in profits. But the chemicals are showing up in U.S. waterways, and little is known about their environmental effects.

One or more fungicides were found in 20 of 29 streams sampled in the U.S. in 2005 and 2006 near areas where soybeans are grown, according to U.S. Geological Survey. Agricultural chemicals, as well as antibiotics, are polluting waterways in Europe, too.

A recent study published in the journal Science of the Total Environment found more than 100 pesticides and 21 drugs in 29 waterways tested in 10 European nations. The substances detected include fungicides, herbicides and insecticides, as well as antibiotics used in livestock.

Scientists say the effects of these various substances mixing together in nature are unknown. However, mounting evidence links pesticides, as well as pollution, habitat changes and global warming, to an “insect Armageddon,” as insect populations were found to decline 76 percent during a 27-year research period.

The best way to protect you and your family from drug-resistant infections and toxic pesticides is to buy local and organic food. Small local producers are less likely to use misuse antibiotics on their animals, and studies showeating organic can significantly reduce your exposure to pesticides. 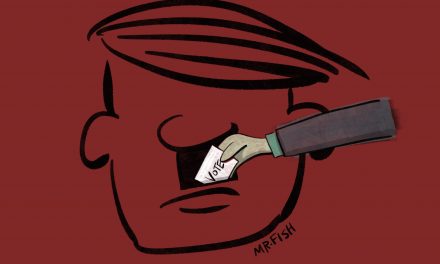 Key US Allies in the Middle East Are the Real Tyrants