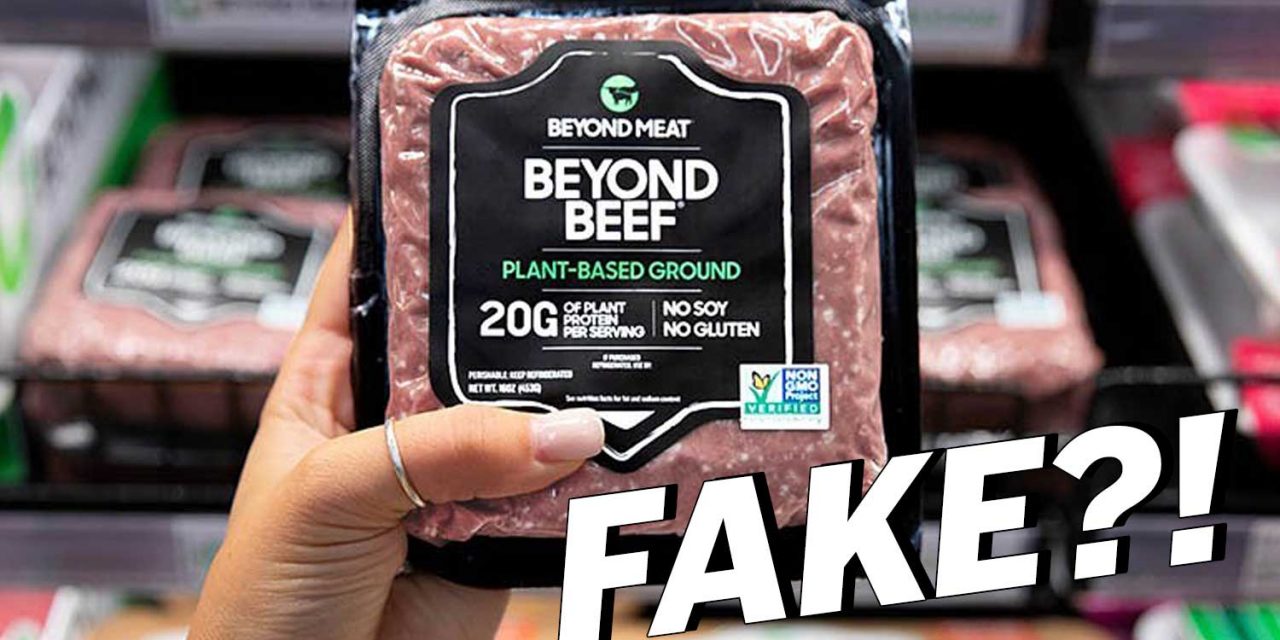 Vegan protein is healthier, more sustainable, and more cost effective than meat. There's nothing "fake" about it.

Plant-based food is more popular than ever, and faux-meat is one of the fastest-growing categories.

Technological innovation has transformed the landscape of food production and vegan alternatives are revolutionizing the idea of meat. There is nothing “fake” about it; vegan protein is healthier, more sustainable, and more cost-effective.

Meat alternatives — either plant-based or lab-grown — counter the inefficiency of industrial meat production. Animal agriculture is a long-winded and expensive way of producing protein, even without the ethical consideration of eating sentient creatures.

struction. Plants can be used to make healthy protein instead of being used to feed CO2-producing livestock.

Vegan meat is already the most popular plant-based product, according to The Good Food Institute (GFI) and the Plant Based Foods Association (PBFA). Vegan meat surpasses the popularity of cheese, ice cream, and even dairy-free milk – which is also wildly popular.

Since plant-based meats are the most popular vegan category by far, why is vegan meat such a contentious topic?

What Is ‘Fake Meat’?

Vegan meat alternatives are particularly helpful for flexitarians who want to cut down on their meat consumption. Creating a direct replacement for an animal product means consumers can switch diets without altering the way they shop, cook, and enjoy food.

The phrase “fake meat” is sometimes used to describe vegetarian or vegan products that approximate the texture, appearance, and flavor of specific animal foods. For example, soy or tempeh can be used to create vegan versions of chicken. Jackfruit is a popular substitute for pulled pork. But the term “fake meat” implies inferiority.

Plant-based meats are considered an ethical, sustainable, and healthier alternative to meat-eating.  Plant-based dishes are widely enjoyed by consumers who still eat meat, giving rise to the popularity of the term “flexitarian.”

Beyond Meat, creator of the popular Beyond Burger, attracts primarily flexitarian consumers. Recent data from the company shows that 93 percent of the burger’s buyers are meat-eaters. CEO Ethan Brown explicitly said last year that he doesn’t consider his burgers “fake.”

“I would never call it that,” Brown said. “We don’t call a mobile phone a fake phone – it’s a better phone than a landline. We have to get people to think about [vegan meat] this way.”

The number of vegans is rapidly growing. However, it is overwhelmingly flexitarians and curious meat-eaters who are creating a mainstream demand for vegan products. According to Nielsen data, 98 percent of those who buy meat-alternatives regularly are also regular purchasers of animal products.

Critics suggest that flexitarianism is not a strong enough response to animal welfare concerns. However, it is flexitarians that have helped improve mainstream attitudes towards plant-based food in general. Cutting down on animal products even a small amount can help to minimize the global environmental impact of animal agriculture.

Flexitarians — and many vegetarians — still enjoy eating meat, so creating alternatives that closely emulate animal meat can make cutting down much easier. Plant-based company Impossible Foods recognizes the cultural and nutritional role of meat but sees veganism as the only sustainable future for meat.

“[When it comes to plant-based foods, basically] people have been looking for a reason to not have to make a compromise when eating [meat],” said Jordan Sadowsky, Impossible Foods’ director of national expansion. “So, [as we can provide] everything that they like about meat but [without] having to deal with the health or environmental issues, people are just eager to try it.”

“Food is the most important technology on our planet. It’s literally required for life,” said Sadowsky. “It’s also been failing to innovate for about 10,000 years. That’s when humans started killing animals and cooking them as a cheap source of protein.”

Many have pointed out that vegan meat is “processed” as an argument for avoiding it. Fast-casual chain Chipotle has said that it will not be stocking Beyond Meat or Impossible Foods. The American chain indicated that this is “because of the processing.” Brian Niccol, Chipotle’s Chief Executive Officer, said in an interview: “If there’s a way for them to do this that would match our ‘food with integrity’ principles, I’m sure we would continue talking with them.”

Beyond Meat CEO Ethan Brown responded by inviting Niccol to see the company’s factory, saying: “We’re all about transparency.”

Brown said in an interview, “Don’t call me, just knock on the door. I invite you to do the same with all of Chipotle’s meat-processing facilities. They won’t let you, and if they did, you wouldn’t want to see it.”

In 2015 the World Health Organization (WHO) assigned processed meats a Group 1 carcinogen label — the same classification as tobacco and asbestos. Red meat, in general, was classed as a Group 2A carcinogen. WHO added that it was “probably carcinogenic to humans.”

Red meat is linked to specific diseases like colorectal cancer and is associated with a 70 percent increased risk of rectal cancer. A separate study also found that those who ate processed meat had a much higher chance of developing breast cancer.

Switching to a vegan diet can have a huge, positive effect on health. There is a growing body of medical studies that show that the health benefits of a plant-based diet far outweigh those of traditional diets. Eating vegan regularly is particularly good for your cardiovascular health. A study from the Journal of Nutrition indicated that a plant-based diet can normalize blood pressure in less than two weeks.

The risk of cardiovascular disease drops by 13 percent when eating 200g of fruit and veg per day. Cancer drops by 4 percent, and premature death by 15 percent. When consuming 800g, this drops by 28, 13, and 31 percent respectively. Adopting a plant-based diet has also been linked to a lower BMI (body mass index).

Earlier this year, The European Parliament’s Agricultural Committee voted to ban the use of meat-related nomenclature on plant-based foods. The European court of justice ruled in 2017 that soya and other plant-based products could not be labeled “milk” or “butter.” Now, the terms “burger,” “steak,” and “sausage” are reserved for animal products.

“People are not confused by terms like ‘veggie burger’ or ‘vegan hot dog,’” said Justin Pearson, a managing attorney at the Institute of Justice. The institute is backing the PBFA and Upton’s Naturals lawsuit against the state of Mississippi. He continued, “Those terms tell consumers that they are buying exactly what they want: a plant-based alternative to animal meat.”

Similar debates are taking place in America. States including South Dakota, Missouri, Arkansas, and Wyoming have already passed laws restricting the labeling of vegan foods. The National Milk Producers Federation (NMPF) has filed a petition with the Food and Drug Administration (FDA). The petition demands that plant-based milk is labeled “imitation.”

Those pushing for stricter labeling laws are explicitly companies that view plant-based products as a real threat to animal agriculture. Many argue that changing the labeling convention will make shopping for plant-based foods less straightforward.

“People are not confused by terms like ‘veggie burger’ or ‘vegan hot dog,’” said Justin Pearson, a managing attorney at the Institute of Justice. The institute backed the PBFA and Upton’s Naturals lawsuit against Mississippi, which introduced its own labeling law last July. He continued, “Those terms tell consumers that they are buying exactly what they want: a plant-based alternative to animal meat.”

Earlier this month, the state of Mississippi backed down from the law. Similar lawsuits are pending in Arkansas and Missouri.

Animal agriculture has prompted the search for meat alternatives. Industrial animal production is inefficient and unethical. Vegan protein is healthier, practical, and sustainable.

Creating plant-based meat is a simple way for people to adjust to the changing needs of the planet and global society. But the producers of vegan meat are not just trying to discourage the consumption of animal products; they are trying to re-frame the whole conversation by making the eating of animals totally redundant.

“Animal agriculture occupies almost half the land on earth, consumes a quarter of our freshwater and destroys our ecosystems,” says Impossible Foods. “So we’re doing something about it: we’re making meat using plants so that we never have to use animals again. That way, we can eat all the meat we want, for as long as we want.”

Plant-based meat encapsulates a combination of innovation and technology; a practical and imaginative solution to an urgent problem. Replacing an unethical, unsustainable, and inefficient practice with a modern one is not imitation – it is inevitable human progress.

Climate Grief: How We Mourn a Changing Planet

How to Sprout Your Own Plant-Based Foods at Home!

What It Truly Means to be a Vegan