No longer does the image of a vegan conjure up dreadlocked hippies eating bowls of broccoli, or an Instagram influencer posing with an overpriced acai bowl.

The plant-based way of eating is now so mainstream you’d be hard pressed to find a cafe or restaurant that doesn’t cater to a vegan guest.

But despite that, you might not be conjuring an image of a marathon runner.

However, it seems that many high-performance athletes are realising that eschewing meat products and opting for a plant-based diet is not only good for the environment (and the animals), it can benefit your athletic performance to boot.

A new study in nutrition journal Nutrients reveals a plant-based diet gives endurance athletes “an edge when it comes to heart health, as well as performance and recovery”.

“Athletes with lower body fat increase their aerobic capacity, which is the ability to use oxygen to fuel exercise,” says Dr Susan Levin.

“Studies show that athletes on a plant-based diet increase their VO2 max – the maximum amount of oxygen they can use during intense exercise – leading to better endurance.”

A number of athletes have proven that meat does not necessitate sporting success. Ultrarunner Scott Jurek credits his achievements to his plant-based diet and tennis star Serena Williams follows a raw food diet.

Upcoming James Cameron-directed documentary The Game Changers follows many plant-based athletes who attribute their diet to their improved performance.

And it’s not just helping you run a marathon or two. Even fun runners can get in on the action.

Local member of Auckland Vegan Actions (AVA) Bryce Kehoe will be joining his fellow vegan activists in running local fun-run Round the Bays next month to raise awareness, and to show vegans don’t just sit withering away on carrots.

Mr Kehoe says that while he’s far from being one of the strong runners – “I should probably start training, thank you for reminding me” – his vegan diet doesn’t slow him down in the slightest.

When he made the transition from vegetarianism six years ago, he said he was shocked how easy it is.

“It’s an awesome community and delicious food,” he says.

While Mr Kehoe wouldn’t consider himself a high-performance athlete, he says one of his vegan friends training for an Ironman “casually cycles 200km then runs a marathon on weekends”.

“He says provided you eat well… it makes you feel good and gives you energy to burn to go and go and GO!” 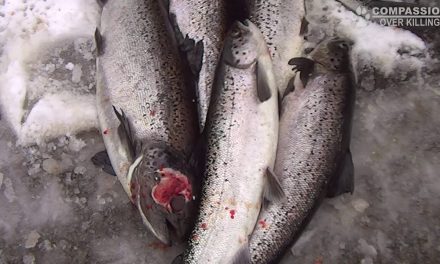 Who Hears the Fishes When They Cry? The Filthy Business of Fish Farming

Fishes, Sentience, And The Law