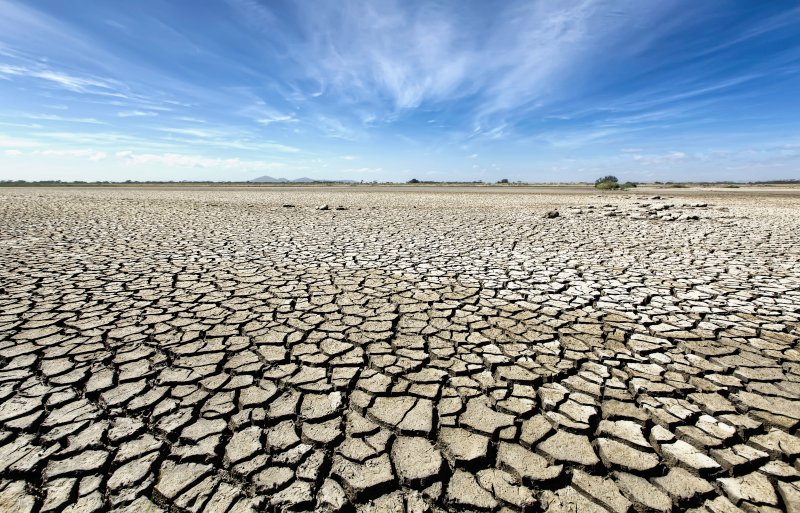 Throughout the world, mega droughts are hitting hard with a ferocity not seen in decades and in some cases not seen in centuries. It’s not merely coincidental that as global warming accelerates droughts turn more vicious than ever before. All of which begs the logical question of when will world leaders wake up with a unified plan of action to mitigate carbon emissions, or is it already too late?

Nobody knows for sure if and when it is too late, but the evidence is crystal clear that extraordinarily powerful droughts are decimating regions of the planet like there’s no tomorrow.

An Australian research paper addressed the issue: Multi-century Cool-and Warm-Season rainfall Reconstructions for Australia’s Major Climatic Regions, European Geosciences Union, Vol. 13, Issue 12, Nov. 30, 2017 by Mandy Freund and Benjamin Henley. According to The University of Melbourne headline about the article: “Recent Australian Droughts may be the Worst in 800 Years.”

That study, which identified the “worst droughts in 800 years,” was published two years prior to the recent drought period accompanied by massive fires across the entire continent… these are unprecedented conditions… never before recorded or seen! Thus sending a strong signal that the world’s normalized climate system is broken, caving-in to a new era of “torrid breakaway climate extremes.”

According to the Australian Bureau of Meteorology: “The data is in and 2019 has topped the charts for average and maximum temperatures as well as the lowest annual rainfall across the country.”

According to the report, Australia’s annual mean temperature was 1.52°C above the 1961-90 average of 21.8°C. Results: A dried-out continent ignited into torrid breakaway fires. Curiously enough, 1.5°C above pre-industrial is the guardrail danger zone reported at the most recent Intergovernmental Panel on Climate Change meetings.

Meanwhile, severe droughts are hitting throughout the world, e.g., according to NBC News: “Ravaged by drought, farmers in rural Honduras and Guatemala live on the edge of hunger… Central America’s Choice: Pray for Rain or Migrate.”

Based upon activity at the U.S. border, Central Americans have selected the migration option, giving up hope, heading north. As the Trump administration rejects the legitimacy of climate change/global warming, forces of climate change drive eco migrants to the States.

According to the UN World Food Program, as for Central America: “Five years of recurring droughts have destroyed maize and bean harvests, leaving poor subsistence farmers in the so-called Dry Corridor that runs through Guatemala, El Salvador, Honduras and Nicaragua struggling to feed their families.”

Farther south, central Chile is in the midst of what scientists have labeled a “Mega Drought,” an uninterrupted period of dry years since 2010. Half of the country has been designated “Emergency Status.” Farmers are going out of business.

According to Felipe Machado, director of Chile’s Resilience Institute: “We are talking about a process of desertification rather than a temporary drought or absence of rain problem.” (Source: Chile Declares Agricultural Emergency as Extreme Drought Hits Santiago and Outskirts, Santiago Times, August 26, 2019)

As it happens, the classification of “desertification” is an advanced stage of radical climate change and convincing evidence that global warming is beyond the scope of all expectations by world leaders. Otherwise, they’d already have in place a Marshall Plan generic to combat global warming, but they do not.

Furthermore, in South America’s Brazil, “The SPI-12 time series showed that from 2011 to 2019, excluding the south region, the other Brazilian regions have been exposed to the most severe and intense drought events in almost the last 60 years.” (Source: Ana Paula M.S. Cunha, et al, Extreme Drought Events Over Brazil from 2011 to 2019, Atmosphere, October 24, 2019)

Regrettably, the Amazon rainforest is also a victim to Brazil’s worst drought in 60 years, which in and of itself should be alarming enough for the major leaders of the world to call an emergency UN session, but no, that carillon call is dead silent. Hmm. Is it possible that all the leaders of the world are so unenlightened as to ignore the Amazon rainforest’s transition from “carbon sink” to “carbon emitter,” same as their coal-powered plants but without as much soot?

And, along the way, according to NASA, the Middle East’s drought cycle from 1998-2012 was the most severe in 900 years. According to Ben Cook of NASA’s Goddard Institute for Space Studies, the drought has continued “in parts of the Middle East.”  Meanwhile, the entire Middle East and southern Mediterranean regions are drying out faster than anywhere else in the world, which is one more source of eco migrants searching for sustenance.

Furthermore, according to The New Humanitarian (June 2019), a severe drought in Africa “leaves 45 million in need across 14 countries, feeling the compound effects of years of drought.”

A CNN World report dated Dec. 14, 2019 says the once mighty Victoria Falls, where water thundered over the precipice on the border of Zimbabwe and Zambia, is nearly dry. A multi-year drought has slowed the enormously powerful waterfalls to little more than a weak stream. That is astonishingly disheartening and representative of massive droughts hitting regions of Africa hard, very hard; one of the world’s great waterfalls turned parched says it all.

Throughout much of Asia, drought is becoming the norm rather than the exception. This year alone, according to data from the Manila-based Asia Development Bank, drought has been severe in Laos, Philippines, Thailand and Vietnam, while Cambodia, Indonesia, Malaysia and Myanmar have all seen moderate drought. (China Daily News, August 12, 2019)

The Mekong River, known in China as the Lancang (aka: the Danube of the East) which cuts through five countries of the Association of Southeast Asian Nations, turning into the Mekong River 2,703 miles long, has seen water levels drop dramatically. In northeastern Thailand, the river is at its lowest level in 100 years. According to Chinese scientists the glacial headwaters that feed the Lancang River are down 80% because of global warming.

Remarkably, the impact of global warming is just now starting to strut its stuff so visibly and so perceptibly that average people are recognizing its threat.

Whereas in the past, global warming was apparent to scientists over a period of decades. Today, it’s unmistakably apparent year-by-year, as entire countries and populations experience its relentlessness and utter devastation.

Postscript: Global governments plan to increase fossil fuels by 120% by 2030, including the US, China, Russia, Saudi Arabia, India, Canada, and Australia.