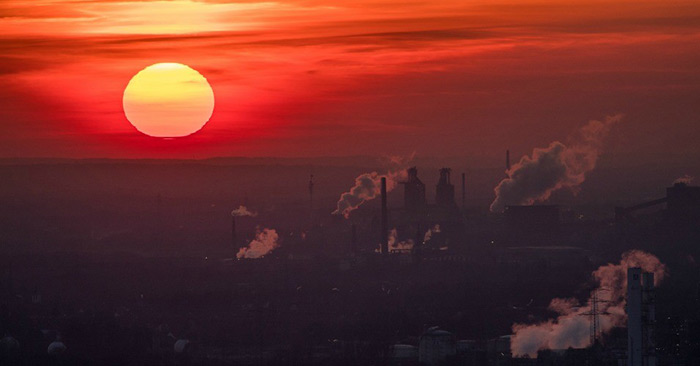 The oceans of the world are undergoing a dangerous and damaging upheaval that manifests throughout scientific studies of late. Whether it’s the world’s fisheries of the Bering Strait or coral reefs of the Mediterranean Sea or emaciated Gray Whales along the Pacific coastline, study after study after study describes sudden, sharp downturns in all categories of marine life. What is going on?

Global warming is the culprit of this deeply disturbing disheartening affair, and it begs the question of whether any nation/state or unified nations can do anything about it. After all, “save the whales” and “save the oceans” have been rallying cries in grocery store parking lot signature gatherings, indicative of the broad reach of public concern, for decades now but to no avail; in fact, over time as the signatures piled up, it’s only gotten worse and worse and now scary.

Deadly marine heat waves that repeat over and over again within short sequences carry massive destructive punch. These events are new to the scene, starting in the 21st century, when anthropogenic warp speed that impacts and alters the climate system inadvertently kicked into gear.

According to a feature story in Nature: Fevers are Plaguing the Oceans and Climate Change is Making Them Worse d/d May 5th, 2021: “Sudden marine heatwaves can devastate ecosystems, and scientists are scrambling to predict when it will strike.”

The same Nature article discussed when scientists first noticed serious damaging levels of significant impact by marine heat waves: “Ten years ago, dead fish began washing ashore on the beaches of Western Australia. The culprit was a huge swathe of unusually warm water that ravaged kelp forests and scores of commercially important marine creatures, from abalone to scallops to lobster. Over the following weeks, some of Western Australia’s most lucrative fisheries came close to being wiped out. To this day, some of them have not recovered.”

Recent studies have focused on the frequency of marine heat waves as the main culprit in this grisly affair. Interestingly enough, marine heat waves are happening coincident with ground heat waves. (Search: Dangerous Heat Across the Globe, January 14, 2022).

The planet is heating up like never before, as “ground temperatures” hit all-time records in the Northern Hemisphere as well as the Southern Hemisphere, and ocean temperatures threaten the world’s major fisheries of the Far North.

According to the National Oceanic and Atmospheric Administration (NOAA) July 2021 was the hottest month in recorded history for the world. The European Union (EU) satellite system also confirmed that the past seven years have been the hottest on record.

“The world ocean, in 2021, was the hottest ever recorded by humans, and the 2021 annual OHC value is even higher than last year’s all-time record value.” (Source: Lijing Cheng, et al, Another Record: Ocean Warming Continues Through 2021 Despite La Niña Conditions, Advances in Atmospheric Sciences, January 11, 2022).

It’s indisputable that the world’s seas are under massive attack by excessive amounts of CO2 and way too much heat (oceans absorb 90% of the planet’s heat) because of global warming, killing marine life outright at a record clip; for example, a billion sea creatures killed by ocean heat off the British Columbia coast in the summer of 2021.  The situation is even worse than that, as the world’s major fisheries of the Far North are threatened like never before, potentially, the crisis of all crises.  (Search: Warnings from the Far North, December 27, 2021 and The Oceans are Overheating, January 14, 2022)

The essence of the issue is not simply ordinary ole marine heat waves, similar to regular climate change, which is the common retort by climate deniers, with bogus statements like: “the climate always changes.” Au contraire, garden-variety climate change is not the issue here, not at all, not even close. The problem is the frequency or recurrence of consequential deadly severe heat waves such that marine life does not have enough time for a comeback once it has been blasted.

Only recently a team of curious journalist from the LA Times traveled to the Far North to meet marine scientists and reported: “Forces profound and alarming are reshaping the upper reaches of the North Pacific and Arctic oceans, breaking the food chain that supports billions of creatures and one of the world’s most important fisheries.”(Source: Susanne Rust, Unprecedented Die-offs, Melting Ice: Climate Change is Wreaking Havoc in the Arctic and Beyond, Los Angeles Times, December 17, 2021)

Repeating/analyzing their nightmarish scenario: “Breaking the food chain that supports billions of creatures and one of the world’s most important fisheries” is an eye-opener, a shocking statement that lingers and one that should motivate a worldwide movement to halt greenhouse gas emissions, the principal cause behind excessive ocean heat in favor of saving marine life. Hello, anybody out there?

Furthermore, speaking of “breaking the food chain”: “Since 2019 until July 29, 2021, a total of 481 whales have stranded along the beaches of North America, including 69 in California.” (Source: Susanne Rust, Something is Killing Gray Whales. Is it a Sign of Oceans in Peril? Anchorage Daily News, August 15, 2021)

Unprecedented death of marine life is happening all across the planet. This is not normal. An important study of coral reefs in the Mediterranean Sea shocked scientist Joaquim Garrbou, stating: “Frankly, I never thought that I would be seeing it. And, it’s happening really fast.” (Source: ‘There’s Not Much Hope’: Mediterranean Corals Collapse Under Relentless Heat, Mongabay, February 4, 2022)

The Garrbon study found coral reef communities that had been devastated by heat waves 15 years ago still not recovered because of the short sequence between subsequent heat waves.

Another study explains: Corals need at least 10 years to bounce back, but increasing global warming is reducing the ability to adapt. Moreover, “we project that more than 99 percent of coral reefs will be exposed at 1.5C to intolerable thermal stress, and 100 percent of coral reefs at 2C.” (Source: Adele M. Dixon, et al, Future Loss of Local-Scale Thermal Refugia in Coral Reef Ecosystems, PLOS Climate, February 1, 2022).

That calculation was in response to IPCC (Intergovernmental Panel on Climate Change) projections that 1.5°C above pre-industrial could hit as early as the 2030s. That’s right around the corner.

Australia’s Great Barrier Reef, the largest coral system in the world, has experienced five mass bleaching events – 1998, 2002, 2016, 2017 and 2020 – all caused by rising ocean temperatures driven by global heating. In the year 2020 water temperatures hit the highest ever recorded since instrumental records were first kept in the year 1900. (Source: 2020 Marine Heatwave on the Great Barrier Reef, Australian Government, Bureau of Meteorology, 2020)

“A survey of 1,036 reefs in the Great Barrier Reef (GBR) over the last two weeks of March (2020) revealed the most widespread bleaching event on record.” (Source: Theresa Machemer, The Great Barrier Reef Is now Facing Most Widespread Bleaching Event Yet, Smithsonian Magazine April 9, 2020)

That was only two years ago, demonstrating the narrowing time sequence between bleaching events. Additionally, a recent (2022) unpublished study written by experts at the US National Oceanic and Atmospheric Administration’s Coral Reef Watch unit, states: “The Great Barrier Reef was in the grips of a record-breaking heat spell yet again in November and December (2021).” Ibid.

The Great Barrier Reef, which is one of the great iconic ecosystems of the planet, easily spotted from the international space station, has a history of resilience, but how much more can it take?

A recent comprehensive study of oceans in toto from 1870-to-2021 discovered: “57% of the global ocean surface recorded extreme heat… For the global ocean, 2014 was the first year to exceed the 50% threshold of extreme heat.” (Source: Tanaka, KR and Van Houtan, KS, The Recent Normalization of Historical Marine Heat, PLOS Climate, February 1, 2022).

The statistic 57% of global ocean surface experiencing “extreme heat” is nearly impossible to fathom. It is disturbingly far-reaching and reason for concern about the entire ocean system. “What can be done” is the question of the century, and who’ll do it? The known perpetrator is excessive greenhouse gas, like CO2 from cars, trains, and planes and cows and industry filling the atmosphere with a heat-trapping blanket of greenhouse gases.

In a 20-yr study: Scientists discovered a distinct pattern of sailor jellyfish, or velella, washing ashore and dying on beaches around the world. The dead fish number in the trillions, and the culprit was a recurring marine heat wave. (Source: Timothy Jones, et al, Long-term Patterns of Mass Stranding of the Colonial Cnidarian Velella: Influence of environment forcing, Marine Ecology Progress Report, School of Aquatic and Fishery Sciences, University of Washington, March 18, 2021).

All of this is happening with overall global temperatures at only 1.2°C above pre-industrial, according to the World Meteorological Organization, but is it really only 1.2C above? That depends upon the date used for the baseline, which has been moved up over time. So, maybe 1.2C is too low vis a vis a more realistic baseline.

After the Paris 2015 UN climate conference, the IPCC suggested staying below 1.5°C pre-industrial to prevent major disruptions to the climate system that can result in failing ecosystems. But, failing ecosystems are already happening at only 1.2C.

An open question remains when and how the world’s governments will unify to stabilize or lower greenhouse gas emissions enough to make a difference, assuming it’s even possible, for marine life to continue, well, actually for all life to continue.

Meanwhile, more than one billion marine creatures killed by a heat wave off the coast of British Columbia less than one year ago serves as one gigantic wake up call!  But, if one billion deaths does not slap in the face and wake up global governing bodies, then what does it take, two or three billion, or how many more?

Although, at the rate things are going, the world will be running out of marine life soon enough that it may not really matter.

Assuming no major radical (yes, radical) changes in socio-economics (neoliberalism) accompanied by all-powerful eco-related policies by the leading nation/states of the world, some scientists believe the oceans, limping along, only have another three decades. Sayonara!

Cut to: Don’t Look Up (Netflix, December 2021) as Meryl Streep, playing US President Janie Orlean, boards a “sleeper ship” blasting off for Planet B.