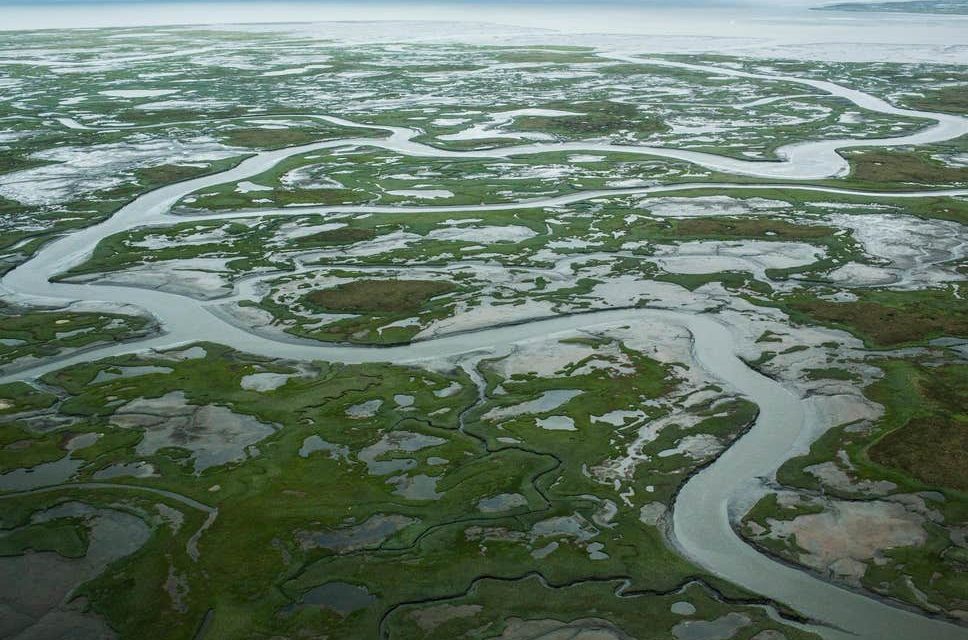 The planet is coming apart at the seams right before the eyes of scientists at work in remote fringe areas of the North where permafrost crumbles and collapses. It’s abrupt climate change at work in real time, but the governing leaders of the world either don’t care or don’t know. If they did, there would already be a worldwide Climate Marshall Plan to save civilization from early warning signals of utter chaos.

After all, collapsing permafrost is the leading edge of cataclysmal global warming as it precedes additional catastrophes that follow one after another, and then another. All of which happen unannounced, known as abrupt climate change events.

The modern world’s First Near-Catastrophe, the Ozone Hole (1980s), was luckily avoided 40 years ago, more on this fascinating story later. It was the planet’s closest brush with nearly total extinction ever since the Permian-Triassic event took down 95% of all life 252 million years ago.

Meanwhile, the concern is whether cascading permafrost will end up as the world’s Second Near-Catastrophe, meaning it gets attended to, or will it lead to something much worse, as in “catastrophes that follow one after another, and then another?”

Cherskiy, Russia, which is home to the Northeast Science Station at 69°N, far above the Arctic Circle, is a year-round base for an international research station that studies Arctic biology and climate change. It is 60 miles inland from the East Siberian Sea (another high risk area in the Arctic).

In January of 2018 something unheard of happened at Cherskiy. The topsoil that has maintained frozen permafrost for eons was not refreezing like it had every year for as long as records were kept. Whereas, January in Siberia is normally so brutally cold that human breath can freeze with a “tinkling sound” that locals refer to as “the whisper of stars.”

The aforementioned example of abrupt climate change in Siberia is a beckoning out of the North, warning that the past 10,000 years of the Holocene era, earmarked by a Goldilocks Wonder World “not too hot, not too cold,” has ended, as excessive heat tears apart regions of the planet, piece by piece. Thereby sounding the alarm and threatening comfy lifestyles in every country in existence today, but is it a warning signal with a short fuse or a long fuse?

Human-generated greenhouse gases have kicked nature into high gear, competing with humanity by emitting tons of methane and carbon dioxide into the atmosphere, even in the winter in Siberia above the Arctic Circle. It’s earth-shattering news that should cause sleepless nights for world leaders, but it doesn’t alarm them. Otherwise, they’d already be taking emergency measures. They’re not!

As it happens, world leadership is sacrificing their constituencies on the altar of fossil fuel profits and a brand of capitalism that recklessly consumes everything in sight. Therefore emphasizing consequences such as, Alaska’s North Slope has seen temperatures spike 11°F in 30 years as temperatures hit 90°F 240 miles above the Arctic Circle, challenging Florida’s balmy weather.

As the Intergovernmental Panel on Climate Change struggles to keep up with ever-faster climate change disaster scenarios that unfold right under their noses, the world’s leadership looks like a herd of deer frozen in headlights. Meanwhile, the risks of excessive global warming, or heat, is not properly understood by the public in the following ‘double-scary’ context:

“Large abrupt climate changes have repeatedly affected much or all of the earth, locally reaching as much as 10°C change in 10 years.” (Source: Alley, Richard B. Abrupt Climate Change: Inevitable Surprises, Washington D.C. National Academy Press, 2002)

That description of abrupt climate change (10°C in 10 years) by Richard B. Alley, Evan Pugh Professor, Penn State University, is based upon paleoclimate data. However, that same risk is not considered by the IPCC or included in scientists’ models, thus it qualifies as one of the least expected climate events. But, it has happened in the past… more than once!

Frankly, society can’t handle 10°C in 10 years, whether “locally,” as stated by Dr. Alley, or universally.

In all, 80-90% of the above-listed statistics occurred in only 70 years, whereas it took modern humans nearly 200,000 years to reach two billion in population. Today, it’s the Great Acceleration at work as post WWII 5.5 billion newbies forage the planet, all within one lifetime. Amazing!

As a result, we are the biggest experiment the planet has ever encountered. Meanwhile, scientific knowledge that establishes “a firm link” between  (1) carbon dioxide emissions and (2) excessive global heat brings forth far-reaching unknowns for today’s carbon dioxide-fueled world. As such, the climate status/integrity of the planet has become a gamble, a crapshoot.

Although, temperature change (the wild card) is all about timing, meaning does it take centuries or decades or years for temperature to react to CO2 levels in the atmosphere? In that regard, Dr. Alley’s “10°C in 10 years” is not encouraging, but nobody knows for sure what will happen tomorrow.

Assuming global warming reacts accordingly, one possible scenario: “In a 4°C world, in which local temperature increases of 5 to 10 degrees will affect many areas, the impact on food production may be catastrophic.” (Source: Angus, Ian, Facing the Anthropocene, Monthly Review Press, 2016, pg. 102)

Similar to ignoring abrupt climate change today, back in the 1970s-80s, no one predicted the speed and magnitude of the steep decline in levels of ozone because of damage by CFCs produced by DuPont ever since the 1930s. In fact, back in the day, NASA had predicted that ozone levels might decline 5 to 9 percent by 2050. But, surprise, surprise, surprise! Ozone levels dropped by 60% by the mid 1980s. Scientists were dumbfounded! And scared!

Without the protective ozone layer, 10-20 miles above Earth, which absorbs most of the Sun’s ultraviolet radiation, life literally burns to a crisp.

In a masterful-less stroke of good luck, a handful of scientists brought the impending disaster of the ozone hole to the attention of the world community.  If not for the British Antarctic Survey that worked on a shoestring budget of $18,000/year, the world wouldn’t have known of the threat to all humanity. Since 1957, they monitored the ozone layer from the Halley Bay Observatory in Antarctica but never suspected human-generated chemicals would attack and destroy the ozone layer.

For 50 years the CFC industry was able to avoid a ban on sales of CFCs due to an absence of hard scientific data showing a decline in ozone levels. In 1979, DuPont officials said: “No ozone depletion has ever been detected despite the most sophisticated analysis… All ozone depletion figures to date are computer projections based on a series of uncertain assumptions,” Ibid, pg. 84.

Similar to CO2 in the atmosphere today, “CFCs had been entering the atmosphere in ever-increasing amounts since the early 1930s. The pre-1980 measurements from Halley Bay undoubtedly included their effect on the ozone layer above Antarctica, but in 1979, what had been a gradual linear process crossed a tipping point, becoming rapid and nonlinear,” Ibid, pg. 85.

Thus, giving birth to an Abrupt Climate Change event that could have destroyed life on Earth. Thankfully, the Montreal Protocol on Substances that Deplete the Ozone Layer was signed in 1987. It saved the world from sure-fire destruction, blind-sided by its own chemical devices.

After reviewing the history of CFCs and the ozone layer, Paul Crutzen (Nobel Prize-winning atmospheric chemist) commented: “I can only conclude that mankind has been extremely lucky,” Ibid, pg. 87.

Now: Is permafrost collapse the Second Near-Catastrophe or something worse?

Hopefully, the answer is not “something worse” because dissimilar to the Ozone Hole crisis, which was solved by a handful of companies and industries implementing a technical fix and banning CFCs, the process of eliminating greenhouse gas emissions is universal, requiring decades of transforming the global economy, a gargantuan task when compared to civilization’s First Near-Catastrophe.

Similar to the Ozone Hole, which hit a tipping point 40 years after CFCs began emitting, collapsing permafrost first happens by inches, then by feet, then by portions of miles, when it is finally recognized as exceeding a tipping point, likely what’s happening today in Siberia, and throughout the far reaches of the Northern Hemisphere where massive levels of permafrost cover 25% of the hemisphere buried in frozen soil for eons, holding more than twice the amount of greenhouse gases currently in the atmosphere.

Permafrost collapse is as alarming, maybe more so, as the Ozone Hole threat, but only a handful of scientists see it and believe it. Sound familiar?