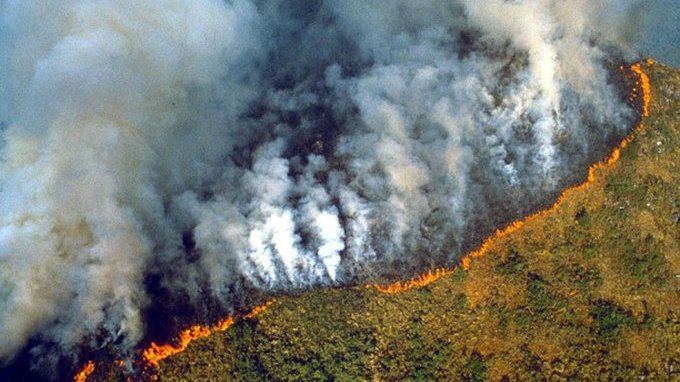 As of September 29th, Brazil’s Bolsonaro government has fired the civilian-run National Institute for Space Research (INPE), which has monitored the Amazon rainforest for the past three decades. INPE is being replaced (drumroll please) by the Brazilian military as the new watchdog over the world-famous rainforest. Voila, worldwide concerns about deforestation are… ah… indeterminate, vague, unspecified.

All along, the spectacularly bountiful rainforest has increasingly come under heavy attack and definitively at risk of turning into a degraded savannah. A warning put forward by world-renowned Amazonian scientist Carlos Nobre, as two powerfully destructive assaults are simultaneously underway: (1) global warming is pounding the rainforest repeatedly every 5 years, ever since 1998, with severe droughts lumberingly reinforced by (2) massive deforestation (cutting down and burning trees) for commercial logging, farming, and mineral exploitation.

Right before the eyes of the world, the most legendary rainforest on the planet goes up in smoke (See previous article: Brazil’s 63,000 Fires, September 8, 2020).

Brazil’s vice president Hamilton Mourão, a retired general, announced, as of September 29th, creation of a new agency with “full authority over Amazon deforestation and fire monitory satellite alerts.” As mentioned above, the new agency is now in charge of collecting and analyzing scientific data for 60% of South America’s rainforest.

A telltale indicator to this sudden change of guard took place almost one year ago when science minister Marcos Pontes fired the former chief of the INPE agency Ricardo Galvão, August of 2019, over a public disagreement with Brazilian president Jair Bolsonaro on the validity of data about deforestation. According to Bolsonaro, the data had been altered to attack his government. In response, Galvão labeled the president “a coward.”

In response to Galvão’s release, Philip Fearnside, an ecologist at INPE, informed Eos news that “deforestation under Bolsonaro is exploding.” He already “had done a tremendous amount of damage in the environmental area just in 7 months… things are falling apart very quickly.” (Source: Ousted Head of Science Agency Criticizes Brazil’s Denial of Deforestation Data, Eos, 20 August 2019)

Carlos Nobre, who worked at INPE for 35 years and who is currently senior researcher at the Institute of Advanced Studies, University of São Paulo indignantly commented: “If deforestation exceeds 20-25% of the Amazon, calculations indicate the region will turn into a degraded savannah,” Ibid.

Using words reserved for catfighting, Bolsonaro informed complaining European countries in 2019 to mind their own business because “they have already destroyed their own environment,” as he claimed his own government’s satellite data showing an alarming rise in deforestation as “lies.” (Source: Bolsonaro Declares ‘the Amazon is Ours’ and Calls Deforestation Data ‘Lies’ The Guardian, July 19, 2019)

Bolsonaro went on to say he was “fulfilling a mission from God.”

He also sharply criticized the foreign press for complaining about his plans to open up indigenous reserves to mining, stating that the press lacked respect for the human rights of Brazil’s indigenous people: “You want the indigenous people to carry on like prehistoric men with no access to technology, science, information, and the wonders of modernity. Indigenous people want to work, they want to produce and they can’t. They live isolated in their areas like cavemen. What most of the foreign press do to Brazil and against these human beings is a crime,” Ibid.

During America’s presidential debate, candidate Joe Biden commenting about Brazil said Trump had “no relationship with foreign policy… The rainforest of Brazil are being torn down.” He suggested a solution: “I would be gathering up and making sure we had the countries of the world coming up with $20 billion, and say, ‘Here’s $20 billion. Stop tearing down the forest. And if you don’t then you’re gonna have significant economic consequences.'” (Source: Brazil’s Bolsonaro Slams Biden for ‘Coward Threats’ Over Amazon, US News, Sept 30, 2020)

Bolsonaro responded to Biden’s jab: “What a shame. Mr. John (sic) Biden! What a shame!” Ibid.

Indeed, what a shame that Brazil’s Amazon rainforest is within reach of turning into a degraded savannah.

The Rights of Nature with Mari Margil and Thomas Linzey