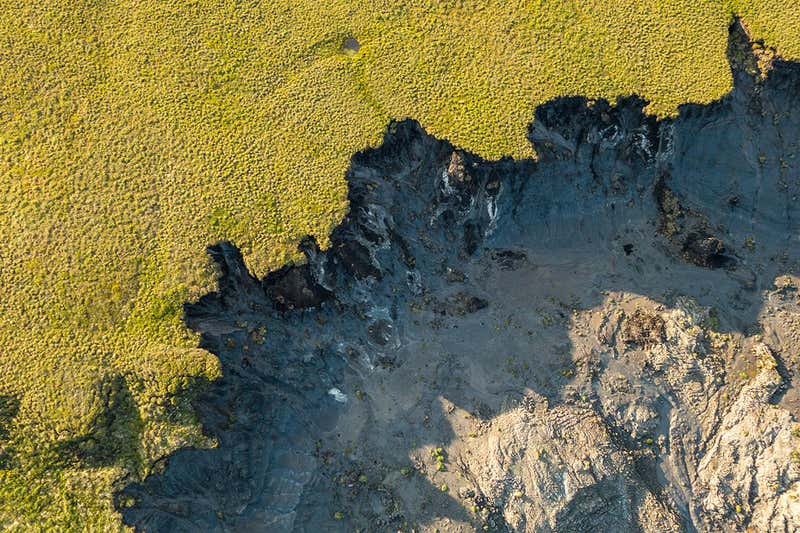 For tens of thousands of years the Arctic’s carbon sink has been a powerful dynamic in functionality of the Earth System. However, that all-important functionality has been crippled and could be permanently severed. According to new research based upon field observations conducted from 2003 to 2017, a large-scale carbon emission shift in the Earth System has occurred.

The “entire Arctic” now emits more carbon than it absorbs, a fact that can only be described as worse than bad news. “Given that the Arctic has been taking up carbon for tens of thousands of years, this shift to a carbon source is important because it highlights a new dynamic in the functioning of the Earth System,” says Susan Natali at Woods Hole Research Center in Massachusetts (source).

The 14-year study showed annualized 1.66 gigatonnes CO2 emitted from the “entire Arctic” versus 1.03 gigatonnes absorbed. It’s a major turning point in paleoclimate history, a chilling turn for the worse that threatens 10,000 years of the wonderful Holocene era of “not too hot, not too cold.” Alas, that spectacular Goldilocks climate, a perfect environment for life on the planet, is now a remembrance of the past.

In time, it’ll bring in its wake difficult/challenging lifestyles across the board, across the planet, as life turns onerous and quite possibly worse.

When scientists researched permafrost over the years, they found a few isolated regions that flipped from carbon sinks to sources of emissions, but this new “research now shows the phenomenon has happened across the region as a whole,” Ibid.

Meanwhile, 25,000 people gather, as of December 2-13, in Madrid for the 2019 UN Climate Change Conference known as COP25. Only recently, the conference was forced to scramble in a move from Chile because of uncontrollable, unprecedented “protests in the streets.” The Chilean protests are mega-numbers of extremely angry citizens sparked into action by a simple increase in transport rates, proving that the world is once again a tinderbox similar to July of 1914.

The 25,000 attendees of COP25 should take heed of an entire city Santiago shut down by angry citizens one million strong. That nagging scenario may be as important as the climate data they analyze because Chilean mass demonstrations are merely a reflection of a worldwide phenomenon that has everything to do with the failure of neoliberalism, as it casts its dark shadow over climate mitigation.

According to Amnesty International: The past few months have seen a seemingly massive surge in protests globally. From the streets of Hong Kong to La Paz, Port-au-Prince, Quito, Barcelona, Beirut and Santiago, we have witnessed a huge wave of people taking to the streets to exercise their right to protest and demand change from those in power. Amnesty International has documented signs of abuse and violations at protests in Bolivia, Lebanon, Chile, Spain, Iraq, Guinea, Hong Kong, the UK, Ecuador, Cameroon, and Egypt in October alone.

Increasingly, people are frustrated by the abject failure of neoliberalism’s austerity measures that destroy social programs, including near total collapse and/or avoidance of proactive climate policies. Contrariwise: “Global governments plan to produce 120 percent more fossil fuels by 203o,” according to a new report by leading research organizations and the UN. (source).

Interestingly, one of the most celebrated crowning achievements of neoliberalism, Chile, the paragon of neoliberalism, has only served to emblazon in the mindset of the world a vast chasm of inequality as Chile is featured having one of the world’s worst levels of income inequality (OECD Economic Survey of Chile). A stark reminder that neoliberalism splits societies into “haves” and “have-nots” almost as effectively as monarchial precepts dating back 5,000 years to Egypt and Sumer.

The continuing failure of neoliberalism works against the best intentions of COP25 and the Paris climate accord of 2015. This failure is explained in a paper entitled “Globalization, Neoliberalism and Climate Change” by professor Liu Cheng, a world renown labor expert, professor of law and politics at Shanghai Normal University, to wit:

“For thirty years, global and national economies have been guided by policies of neoliberal deregulation, often known as the ‘Washington Consensus.’ Neoliberalism has been disastrous for workers in most countries, pitting workers against each other in a race to the bottom and making it all but impossible to protect working class interests. There is now a growing consensus that the Washington Consensus has been a failure.

There is also a growing global recognition that we are in the midst of an unprecedented climate crisis. Ready or not, that crisis is affecting every nation, every locality, and every worker. Its effects are already serious, and unless decisive global action is taken to counter it, they will soon be catastrophic. Neoliberal deregulation, by dismantling the means for public steering of society to meet social needs, has also made it nearly impossible to correct global climate crisis.

These twin realizations, the failure of neoliberalism and the climate crisis, will define the struggle for the interests of poor and working people for the next century. At the same time, the necessity to counter climate change may provide an opportunity to address the broader problems of neoliberal deregulation.

This article argues that it is only by rolling back neoliberalism that we can protect the rights of workers globally and solve the crisis of climate change.”

As massive protests continue around the world, COP25 opens with UN Secretary-General Antonio Guterres declaring the negotiations the “launch pad for significantly more action,” emphasizing the fact that the world’s largest emitters “are not pulling their weight.”

However, maybe COP25 needs to study the impact of neoliberalism as an overriding disincentive for climate change mitigation. After all, according to professor Cheng: Neoliberal deregulation, by dismantling the means for public steering of society to meet social needs, has also made it nearly impossible to correct the global climate crisis.

Therefore, COP25’s hundreds and thousands of scientific data and climate models are held hostage to neoliberalism’s scorched earth tactics. The only way for COP25 to dig out of this deep neoliberal hole is by open condemnation, thus alerting the world’s attention to the originator of climate change with a message, “fix it.”