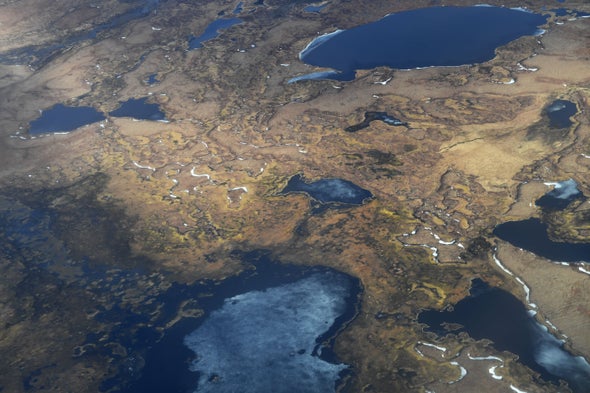 Aerial view of melting permafrost tundra and lakes near the Yupik Eskimo village of Quinhagak on the Yukon Delta in Alaska on April 12, 2019. Credit: Mark Ralston Getty Images

Twenty-five percent (25%) of the Northern Hemisphere is permafrost. By all appearances, it is melting well beyond natural background rates, in fact, substantially!

Making matters much, much worse, new research has identified past warming events of large-scale permafrost thaw in the Arctic that may be analogous to today, thus spotting a parallel problem of large-scale thawing accompanied by massively excessive carbon emissions spewing into the atmosphere, like there’s no tomorrow. (Source: Jannik Martens, Remobilization of Dormant Carbon From Siberian-Arctic Permafrost During Three Past Warming Events, Science Advances, vol. 6, no. 42, October 16, 2020)

Permafrost thawing is not, at all times, simply “thawing.” Of course, as a standalone, the word “thawing” implies a rather evenly keeled methodical process without any specific definition of scale. But, there’s thawing, and then, there’s “large-scale thawing,” which is kinda like turning loose a behemoth. The results are never pretty.

As global warming powers up, like it’s doing now, it has a penchant for finding enormous spans of frozen mud and silt filled with iced-species in quasi-permanent frozen states known as permafrost. As it melts, it’s full of surprises, some interesting, as well as some that are horribly dangerous, for example, emitting huge quantities of carbon, thus kicking into high gear some level of runaway global warming that threatens to wipe out agriculture.

As a matter of fact, according to the research, no more than a few degrees of warming, only a few, can trigger abrupt thaws of vast frozen land thereby releasing vast quantities of greenhouse gases as a product of collapsing landscapes, and it feeds upon itself. Indeed, the research effort identified “surges in greenhouse gas emissions… on a massive scale,” Ibid.

The study suggests that massive permafrost ecosystem thawing is subject to indeterminate timing sequences, but it’s armed with a “sensitive trigger” abruptly altering the landscape in massive fashion. In short, an event could arise out of the blue. It’s well known that Arctic permafrost holds considerably more carbon captured in a frozen state than has already been emitted into the atmosphere.

Already, over just the past two years, other field studies have shown instances where thawing permafrost is 70 years ahead of scientists’ models, prompting the thought that thawing may be cranking up even as the Intergovernmental Panel on Climate Change (IPCC) fails to anticipate it.

After all, permafrost is not included in the IPCC’s carbon budget, meaning signatories to the Paris accord of 2015 will need to recalculate their quest to save the world from too much carbon emitting too fast for any kind of smooth functionality of the planet’s climate system. In turn, it undoubtedly negatively impacts the support, or lack thereof, for food-growing regions, which could actually collapse, similar to cascading dominos. Poof!

According to Susan Natali of Woods Hole Research Center (Massachusetts), the Arctic has already transformed from a carbon sink to a carbon emitter: “Given that the Arctic has been taking up carbon for tens of thousands of years, this shift to a carbon source is important because it highlights a new dynamic in the functioning of the Earth System.” (Source: Thawing Permafrost Has Turned the Arctic Into a Carbon Emitter, NewScientist, Oct. 21, 2019)

A 14-year study referenced by Dr. Natali shows annualized 1.66 gigatonnes CO2 emitted from the Arctic versus 1.03 gigatonnes absorbed, a major turning point in paleoclimate history, a chilling turn for the worse that threatens 10,000 years of our wonderful Holocene era “not too hot, not too cold.” Alas, that spectacular Goldilocks life of perfection is rapidly becoming a remembrance of the past.

As stated by Romanovsky: “The new (Jannik Martens, Remobilization) research is yet more evidence that the amplified warming in the Arctic can release carbon at a massive scale.”

Nobody knows how soon such an event will break loose in earnest, but global warming has already penetrated the upper permafrost layers, as cliffs of coastal permafrost are collapsing at an accelerating rate. In short, the current news about thawing/collapsing permafrost is decidedly negative and a threat to life, as we know it.

The Martens’ study conclusively states: “The results from this study on large-scale OC remobilization from permafrost are consistent with a growing set of observational records from the Arctic Ocean and provide support for modeling studies that simulated large injections of CO2 into the atmosphere during deglaciation (14–16). This demonstrates that Arctic warming by only a few degrees may suffice to abruptly activate large-scale permafrost thawing, indicating a sensitive trigger for a threshold-like permafrost climate change feedback.” (Jannik Martens, Remobilization)

Thus, as the Holocene era wanes right before humanity’s eyes, the Anthropocene, the age of humans, stands on the world stage all alone with its own shadow and with ever fewer, and fewer, and fewer vertebrates roaming amongst fields of scorched, blackened plant life. What, or who, will it eat?

According to the Pulitzer Prize-winning author and world renowned biologist E.O. Wilson: If we choose the path of destruction, the planet will continue to descend irreversibly into the Anthropocene Epoch, the biologically final age in which the planet exists almost exclusively by, for, and of ourselves.

5 of the Best Ted Talks About Renewable Energy