Permafrost covers 25% of the Northern Hemisphere. It is the world’s largest icebox, and its landmass is 4.5xs larger than Antarctica, 6.5xs larger than the United States. It is stuffed full of carbon locked in frozen ground accumulated over eons, which, by way of contrast, makes coal power plant emissions look bush-league.

Most notably, permafrost has an image of permanence and slow/gradual change, “the sloth of the north.” But, that slothful image is now out-of-date. Global warming has changed the equation. Nowadays, permafrost disintegration is officially hot news.

Scientists that have long studied the gradual thawing of permafrost are now experiencing a dramatic switch from their former “eyes wide shut” viewpoint, i.e., refusing to see something that’s in plain view because of preconceived notions. That slothful image of yesteryear has been shattered via numerous studies, as for example: Merritt Turetsky, Canadian Research Chair in Integrative Ecology, University of Guelph, “Rapid Permafrost Thaw Unrecognized Threat to Landscape, Global Warming Researcher Warns,” Nature d/d May 1, 2019.

Gradual permafrost thaw is now passé: “Turetsky and an international team of researchers are looking at something very different: Rapid collapse of permafrost that can transform the landscape in mere months through subsidence, flooding and landslides,” Ibid.

Based upon observations as recorded by the Turetsky research team, a climate crisis has already set in. It is here now: “We work in areas where permafrost contains a lot of ice, and our field sites are being destroyed by abrupt collapse of this ice, not gradually over decades, but very quickly over months to years,” said Turetsky.

According to team member Miriam Jones, a U.S. Geological Survey research geologist: “This abrupt thaw is changing forested ecosystems… resulting in a wholesale transformation of the landscape that not only impacts carbon feedbacks to climate but is also altering wildlife habitat and damaging infrastructure.”

Still, the scientists behind the study remain optimistic that something constructive can be done to limit the dangers implied in the details of their study, to wit: “If we can limit human emissions, we can still curb the most dangerous consequences of climate warming,” blah, blah, blah.

Most scientists and media sources claim it’s still not too late to do something to mitigate climate change. But, lingering questions remain, like what, when, how and who? Where’s the leadership? When it comes to fixing the blistering pace of climate change, talk is cheap, whereas, only action counts.

In that regard, there is a well-defined approach to the climate crisis as well as answers to the aforementioned Turetsky study, which clearly delineates big time trouble right around the bend. Indeed, when the world’s largest landmass literally crumbles apart, as stated in Turetsky’s study, “right in front of our eyes,” then alarm bells should be going off all across the land, especially in the office of the president responsible for one of the world’s largest permafrost regions, Alaska.

Under current climate conditions, the danger of runaway global warming and subsequent burn off of mid-latitude agriculture cannot be overstated. The implications are dreadful. Still, the provocative question remains “is it too late” as publicly stated by some climate scientists, without doubt the world’s most disturbing Debbie Downers, and unfortunately, verily truly, they have scientific evidence that backs up their predictions. Hopefully, fingers crossed, they’re wrong.

Still, the movement to fixit has “legs,” and it’s important to remember that nobody knows what the future holds. The big fixit could work!

For answers about what to do in the face of the climate emergency, hands down, the best essay extant is Margaret Klein Salamon’s “Leading the Public into Emergency Mode: Introducing the Emergency Climate Movement” here.

Here’s a snippet: “At the end of 2018, the dam finally burst and the Climate Emergency Movement has emerged, finally, as a powerful force. This movement tells the truth about the scale of the crisis, and demands a “Green New Deal” or a WWII-scale climate mobilization — a 10-year transition to zero emissions plus drawdown. Led by Alexandria Ocasio Cortez and the Justice Democrats in Congress, the Sunrise Movement, Zero Hour, School Strikers, and Extinction Rebellion in the streets, this movement has burst forth with tremendous force and momentum. As of the time of this writing, more than 500 cities in 4 countries have declared a ‘Climate Emergency’ and most of the major Democratic Presidential candidates have stated that they support the Green New Deal.”

Here’s another snippet: “Working in coalition with international allies and on-the-ground leaders, The Climate Mobilization has helped to spread this campaign to 500 local governments around the world, representing over 50 million people; it is now growing at a compounding rate. Because of Extinction Rebellion’s impact, as well as the work of the British Green Party, more than 50 UK cities have declared climate emergency and commit to emergency speed decarbonization. London declared a climate emergency in mid-December, committing to transform its economy to carbon-neutral by 2030. Non-governmental organizations have also declared Climate Emergency. University of Bristol became the first university to declare a Climate Emergency. The XR-affiliated campaign Culture Declares a Climate Emergency has supported hundreds of British cultural institutions and artists in declaring a climate emergency. The Climate Mobilization plans to help spread this into the US as well.”

Throughout the world, and at astounding rates of growth, nearly as rapidly as climate change itself, people are organizing to fight the climate crisis. Already, remarkable success is happening around the world, which is highlighted in Salamon’s essay.

Even more fascinating yet: Out of the blue, the leadership question has been answered. It’s the people, en masse!

All of which points to a distinct probability that “The Climate Crisis” will be a determining (maybe “the major”) factor in the upcoming 2020 election. Just look at recent headlines: “Will 2020 Finally Be The Climate Change Election?” (Buzzfeed), “Climate Change Suddenly Matters in the 2020 Race” (Politico), “Climate Change Could Become a Top Issue in 2020 Election” (Time).

Postscript: “Margaret Klein Salamon is an invaluable guide to this new moment,” (Bill McKibben). “Salamon’s work continues to lead the conversation,” (Michael Mann). “No one has been more inspiringly clear-eyed about the climate emergency or what it demands than Margaret Klein Salamon,” (David Wallace Wells). 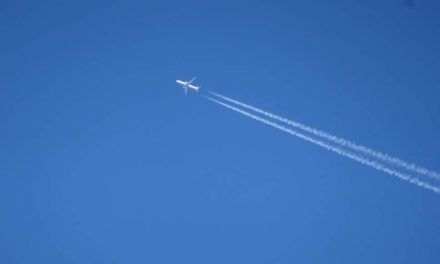 Flying More Than Twice As Damaging to Climate Than Previously Thought, Study Finds