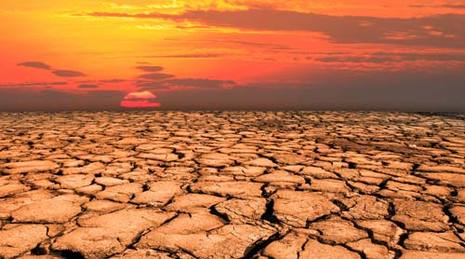 The human body has limits. If “temperature plus humidity” is high enough, even a healthy person seated in the shade with plentiful water to drink will suffer severely or likely die. It’s the Wet-Bulb Temperature (TW) effect.

There is an upper limit to human capacity to adapt to excessive global heat when combined with excessive levels of humidity. That limit is expressed as Wet-Bulb Temperature. A threshold is reached when the air temperature climbs above 35 degrees Celsius (95 degrees Fahrenheit) and the humidity is above 90 percent. Higher temperatures require less humidity, so when the air temperature is 100 degrees Fahrenheit, the wet-bulb survivability threshold is reached when humidity hits 85 percent. People will not survive beyond this threshold, which new research shows trending across the globe much earlier than previously predicted.

Previous climate models predicted widespread wet-bulb thresholds to hit late this century, maybe in the final quarter. However sadly, global heating is not waiting around for the last quarter of this century.  The wet-bulb peril is already far ahead of schedule (source).

Furthermore, society has already experienced early-stage warnings of the dire consequences of TW that occurred more than a decade ago when thousands of people died in Europe (yr-2003 with 70,000 dead) and in Russia (yr-2010 with as many as 10,860 dead) as Wet-Bulb Temperature in-excess of 28°C took down tens of thousands of lives. Alas, 80,860 Europeans and Russians perished from too much heat plus too much humidity, a deathly concoction formulated by global heat, which was goosed up by excessive atmospheric fossil fuel greenhouse gases.

Currently, the aforementioned Raymond study has moved the needle of expectations from the late 21st century back to the present day. This is bad news and surely indicative of out-of-control excessive levels of atmospheric CO2, evidence that humanity is accelerating the wet-bulb peril.

Of course, the paramount risk is that extreme heat waves that previously happened once every 25 years will now become annual events with temperatures close to or above the wet-bulb threshold for several weeks each year, in turn leading to mass famine and mass migrations.

The Raymond study found extreme humid-heat conditions beyond prolonged human physiological tolerance occurring for 1-to-2 hours duration concentrated in South Asia, the coastal Middle East, and coastal south of North America. Of major concern, as stated in the study: “Steep and statistically significant upward trends in extreme TW frequency (exceedances of 27°, 29°, 31°, and 33°C) and magnitude are present across weather stations globally.”

For example, wet-bulb temperatures measured over and near the Persian Gulf were at or above what is considered survivable if humans were exposed to them for even just a few hours. Additionally, as for the Middle East, the Raymond study found reliable observational evidence that such readings have occurred in Pakistan, Saudi Arabia, and the United Arab Emirates.

Thus, not only does the study identify current wet-bulb issues in South Asia, the coastal Middle East, and along portions of southern North America, the global trend is “steep and significant.” This is cause for alarm indicative of powerful adverse climate change/global heat threatening the entire planet. As stated in the study, the global trend is “steep and significantly upward.” That’s bad news, period.

Furthermore, according to the Raymond study: “(1) our findings thus underscore the serious challenge posed by humid heat that is more intense than previously reported and increasingly severe… (2) Our findings indicate that reported occurrences of extreme TW have increased rapidly at weather stations and in reanalysis data over the last four decades and that parts of the subtropics are very close to the 35°C survivability limit, which has likely already been reached over both sea and land… (3) Our survey of the climate record from station data reveals many global TW exceedances of 31° and 33°C and two stations that have already reported multiple daily maximum TW values above 35°C. These conditions, nearing or beyond prolonged human physiological tolerance are concentrated in South Asia, the coastal Middle East, and coastal south of North America….”

According to scientists, in order to stem the onset of universal deathly Web-Bulb Temperatures ,CO2 emissions must be sharply reduced quickly.

Yet, CO2 emissions are accelerating in the face of the Paris 2015 climate agreement calling for mitigation by the nations of the world. The facts are glaringly clear that mitigation is not working.

Global heat plays directly into the hands of the wet-bulb temperature effect. Over time, the new trend will severely restrict and in time prohibit usage of large parcels of land currently occupied for living space and agriculture.

Similar to tipping points in the climate system that are close to being triggered much sooner than scientists predicted, and several that are already triggered, like cascading permafrost in Siberia, the sudden advance of Wet-Bulb Temperature thresholds are one more authoritative warning to the world that something is fatally wrong.