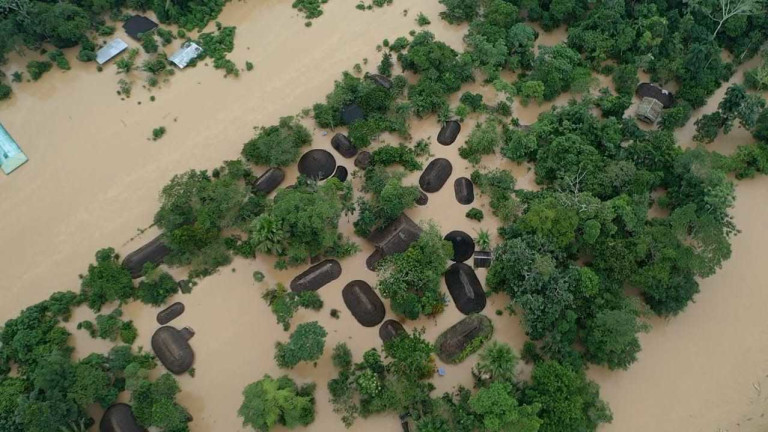 After a day and a night of extreme rainfall at its headwaters, the Bobonaza River, which passes through a mosaic of indigenous towns and villages near Ecuador’s border with Peru, was rising at a rate local communities had never seen before.

Many did not even have time to collect up their things before the waters had inundated their houses. Communities quickly sent out word that a flood had hit them. In a sign of what could come elsewhere in a world experiencing the dual crises of a pandemic and climate change, government support has been slow to roll in despite some community members losing everything.

“It was very strange, intense rain,” Melva Patricia Gualinga Montalvo, a leader of the Kichwa people in Sarayaku, one of the impacted riverside indigenous towns in Pastaza province, told Earther. “The river rose about 15 meters in the basin. It’s never risen like that. It covered all the houses and wrecked them. It devastated everything: schools, high schools, solar panels, homes, crops, vegetable gardens, little plots with chickens, everything that was in its path, leaving the indigenous peoples in the most terrible situation.”

The water left a metre (three feet) of mud on top of everything it passed, said Gualinga. Three suspension bridges that sat around 15 meters (nearly 50 feet) over the river were damaged. She estimated that 700 people in her town alone—around half of its population—have been impacted. Some lost their kitchens, others their crops, but around 30 families whose wooden houses were swept away have been left with “absolutely nothing”, she said. “With only what they had on their backs. Their houses, their pots, everything, everything gone.”

Several other communities have been affected by the floods, which also occured along two other nearby rivers. But with the Ecuadorian government focusing on the coronavirus pandemic, the reaction to the flooding has been slow. The country has seen a rapid increase in covid-19 cases over the past few weeks. The total reached more than 1,800 reported cases by Saturday, the most of any Latin American country outside of Brazil and Chile. Of the reported cases, the country has also recorded 48 deaths from the virus.

Ecuador has taken strong measures in recent days to stop the spread of the virus, including a nighttime curfew and completely closing its borders to foreigners and nationals alike. In one incident last week, local authorities in Guayaquil, Ecuador’s largest city, ordered trucks onto the runway to prevent a Spanish repatriation plane from landing (the plane eventually landed in Quito).

When I first spoke to Gualinga on Monday, she said government representatives had only arrived the day before—five days after the flood—to begin to evaluate the situation. Many of the families in Sarayaku who lost their homes initially ended up camping out in the church and the local Catholic mission, not the most ideal situation for social distancing. Ten days after the flood, 138 sleeping kits with mattresses and 175 family tableware kits arrived in Sarayaku.

“The pressure worked, I think,” said Gualinga. Other communities are still waiting for any kind of government support, according to Amazon Watch.

The relationship between the Kichwa people of Sarayaku and the government is fragile at best. For decades, they have fought the government over unauthorised oil development in their territory, winning a case in the Inter-American Court of Human Rights in 2012. They were also at the forefront of the mass protests over austerity measures that swept Ecuador last year, eventually forcing the government to backtrack on its plans.

With little government support so far, Sarayaku has turned to a GoFundMe campaign to help people rebuild their homes. The fundraiser has so far brought in $US42,000 ($68,124) in donations to help rebuild homes with Gualinga saying the first delivery of essential supplies arriving by canoe on Sunday.

The heavy rains of the past week form part of a wider picture of more severe floods in the Ecuadorian Amazon over the last 10 years. Gualinga views it as crystal clear that the flood is connected with climate change, noting her 96-year-old father and 86-year-old mother have experienced nothing like this. Numerous lines of research show heavy downpours are becoming more common as a warmer atmosphere gets bogged down with more water.

“The probability of having the floods has increased substantially as a result of climate change,” Carlos Larrea, an environment and sustainability professor at the University Andina Simón Bolivar in Quito, told Earther.

What’s happening in the Ecuadorian Amazon right now is a bellwether for other places and not just on the climate front. That’s because climate change isn’t letting up just because there’s a global pandemic.

The U.S., for example, is facing the prospect of dealing with climate-related threats and coronavirus at the same time. The National Oceanic and Atmospheric Administration (NOAA), is forecasting that some 28 million people are at risk for moderate or greater flooding this spring. Flooding has already hit Ohio, where hundreds of people were evacuated last week. And the NOAA forecast doesn’t account for flash floods like those forecast to hit parts of the Midwest on Saturday amidst a severe weather outbreak.

Rural areas where access to health care facilities may be more limited are facing both the highest projected infection rates and flood risks, according to an analysis by climate scientist Kristina Dahl for the Union of Concerned Scientists.

For example, several counties in eastern South Dakota and eastern Iowa are projected to have 25 per cent or more of the population infected by the virus in the same timeframe as they are at risk of experiencing major flooding, the analysis found. Data like this can help inform decision makers to understand in advance where limited resources may be most needed.

“At the state and local level, states can be thinking about where the combined risks of infection and natural disasters are highest when identifying facilities that could be temporarily converted to shelters or medical facilities,” wrote Dahl. “Resources can then be allocated in proportion to the identified risks.”

Many countries will also need to be mindful of how the current unprecedented situation with coronavirus will interact with another major climate challenge: extreme heat.

Across the globe many people face the prospect of a summer trapped in their homes, many without air conditioning. In India, where more than one billion people are currently living under lockdown, just 5 per cent of people have air conditioning. Extreme heat already kills more people in the U.S. than any other weather-related event, and scientists expect 2020 to be one of the hottest years on record. Record heat waves in France last summer led to over 1,400 additional deaths. This number may have been much higher without the preventative measures that were implemented like keeping large parks and swimming pools open, actions that may not be an option this year.

The coronavirus pandemic seems likely to continue to threaten and disrupt lives across the world for at least several months to come. The global focus on the pandemic is completely understandable. But it is vital this does not mean the ongoing impacts of climate change are buried behind the headlines or ignored by governments. Too many people on the frontlines of climate change—whether it’s those in the Midwest or the remote villages of the Amazon—do not have the option to do this.