Nations around the globe have pledged to increase their forest cover by planting millions of trees. But new research shows much of this growth would be in monoculture plantations that would be quickly cut down and do little to tackle climate change or preserve biodiversity.

Experts agree: Reforesting our planet is one of the great ecological challenges of the 21st century. It is essential to meeting climate targets, the only route to heading off the extinction crisis, and almost certainly the best way of maintaining the planet’s rainfall. It could also boost the livelihoods of hundreds of millions of inhabitants of former forest lands.The good news is that, even as deforestation continues in many countries, reforestation is under way in many others. From India to Ethiopia, and China to Costa Rica, there are more trees today than there were 30 years ago, saving species, recycling rain, and sucking carbon dioxide from the air. The Bonn Challenge, an international agreement struck eight years ago to add 1.35 million square miles of forests (an area slightly larger than India) to the planet’s land surface by 2030, is on track.But what kind of forests are they?A damning assessment published earlier this month in the journal Nature brought bad news. Forest researchers analyzed the small print of government declarations about what kind of forests they planned to create. They discovered that 45 percent of promised new forests will be monoculture plantations of fast-growing trees like acacia and eucalyptus, usually destined for harvesting in double-quick time to make pulp for paper.

There are growing concerns that the reforestation agenda is becoming a green cover for the further assault on ecosystems.

Such forests would often decrease biodiversity rather than increase it, and would only ever hold a small fraction of the carbon that could be captured by giving space for natural forests. Another 21 percent of the “reforestation” would plant fruit and other trees on farms as part of agroforestry programs; just 34 percent would be natural forests.

“Policymakers are misinterpreting the term forest restoration [and] misleading the public,” the study’s two main authors, geographer Simon Lewis of Leeds University and tropical forest researcher Charlotte Wheeler of Edinburgh University, commented in a blog. It is, they say, a “scandal.”

Forestry and climate experts say that monoculture timber plantations have their place, but that they must be in addition to the 1.35 million square miles of restored natural forests, not instead of them. These experts also say that an important component of reforestation is supporting policies that help trashed forests and degraded lands regenerate naturally into jungle or woodlands, thus promoting significant carbon storage and fostering biodiversity. Richard Houghton, an ecologist at the Woods Hole Research Center in Massachusetts, has estimated that if degraded tropical forests were allowed to regrow, they could capture up to 3 billion tons of carbon annually for as much as 60 years, potentially “providing a bridge to a fossil fuel-free world.”

The world’s forests are home to half of all terrestrial species. Their foliage recycles rainfall to keep the interiors of continents from turning into desert, and they store CO2 that would otherwise add to global warming. Their restoration is fast becoming a global clarion call, essential for protecting biodiversity and climate.

Environment groups such as The Nature Conservancy and World Resources Institute (WRI) trumpet the environmental potential — and economic rationale — for putting reforestation at the heart of “natural solutions” to climate change. Such new forests “can provide 37 percent of cost-effective CO2 mitigation needed through 2030” to hold down warming, an international study headed by Bronson Griscom of The Nature Conservancy concluded.

The World Wildlife Fund (WWF) has called for the planting and protection of 1 trillion trees worldwide. The United Nations recently declared the 2020s would be the “Decade of Ecosystem Restoration.” As well as the promises made in Bonn, reforestation is central to fulfilling many countries’ emissions pledges made at the Paris climate conference in 2015.

But there are growing concerns that the reforestation agenda is becoming green cover for a further assault on the world’s ecosystems, and that this will undermine its ability to deliver for climate.

Reforestation is happening. Many countries in temperate lands have been gradually increasing their forest cover for decades. Europe has a third more trees than it did a century ago, as they encroach onto unwanted farmland. Some of the biggest expansion has happened in Eastern European countries such as Romania and Poland since the collapse of communist rule, when state collective farms were abandoned. In New England, forests have recolonized 15,400 square miles, an area 1 1/2 -times the size of Massachusetts, since the mid-19th century.

Many Chinese farmers who took money to plant trees said they would cut them down when the subsidies stopped.

But if there is a date when reforestation took flight as a global policy project, it was probably 20 years ago, when China blamed massive floods along the Yangtze River on deforestation. In 1999, Beijing banned further deforestation on Chinese soil and launched its Conversion of Cropland to Forest Program, sometimes called “grain for green.” Today, it claims the program has paid more than 100 million farmers across the country to plant trees and has restored more than 108,000 square milesof forest.

The effectiveness of the program has often been questioned. One important component, the “great green wall” project, which aims to halt spreading deserts across northern China by planting 100 billion trees by 2050, has been called a “fairy tale” by some Chinese ecologists. They claim five out of six seedlings have died. Geographer David Shankman, professor emeritus at the University of Alabama and a long-time observer of China’s reforestation programs, told Yale Environment 360: “I am not confident of long-term success.”

A 2016 study of the overall Chinese program by Lucas Gutiérrez Rodríguez of the Center for International Forestry Research in Bogor, Indonesia, found the published research was skewed and variable. The impacts on biodiversity were sometimes negative. On Hainan Island, for instance, the reforestation program replaced traditionally biodiverse farming systems with monocultures of eucalyptus and rubber. And many farmers who took money to plant trees on their land said they would cut them down again when the subsidies stopped. But Rodríguez agreed that, despite its failings, China had seen “a substantial increase in forest cover and associated carbon stocks.” 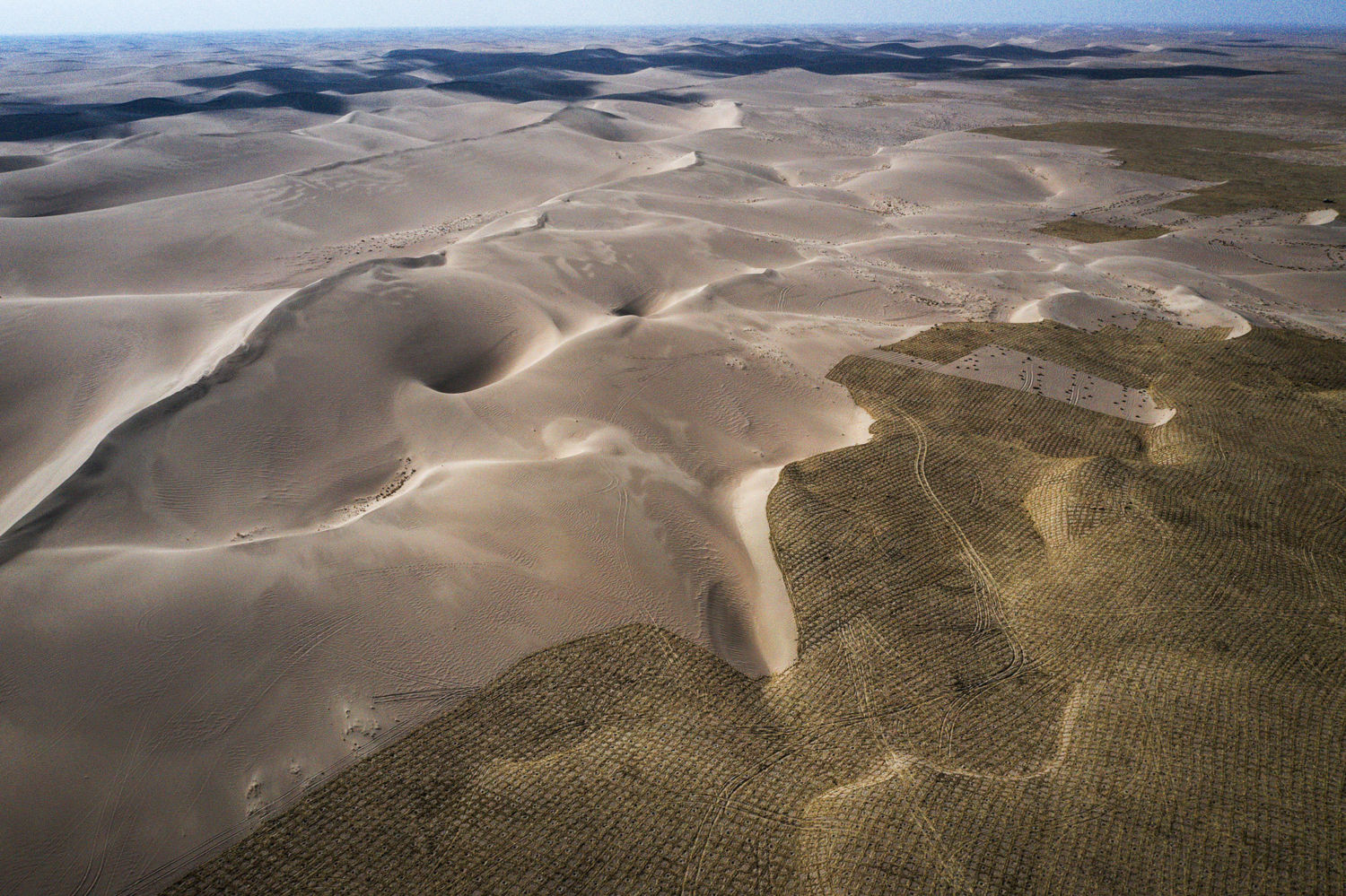 A tree-planting project in Gansu Province, China. Authorities aim to plant 100 billion trees by 2050 to halt the spread of deserts in northern parts of the country. WANG HE/GETTY IMAGES

Other developing countries have also made the transition from deforestation to reforestation. Costa Rica saw its forest cover decline from 75 percent in 1940 to 20 percent in the late 1980s, mostly through clearance for cattle ranches. But with the government paying land users to nurture new forests of native tree species, cover has since recovered to more than 50 percent.

Nepal has seen a remarkable development of community forests. Some 17,000 autonomous community forest user groups, with rights to manage their forests and control access, have driven a rise in national forest cover of around 20 percentin the past three decades. Those new woodlands are largely composed of native species.

In Niger, on the edge of the Sahara desert, farmers have overturned decades of advice from government agricultural advisors and begun nurturing rather than removing trees on their land. The grassroots movement began in the mid-1980s in a single village, says Chris Reij, then of the VU University, Amsterdam and now at WRI, who uncovered it. Farmers in Dan Saga in the Maradi region of the country discovered by accident that they got better grain yields if they let trees grow; the trees stabilized soils, helped retain nitrogen, and dropped leaves that maintained soil moisture. Word spread. Today, the practice extends across 12.3 million acres and 200 million trees.

Increasingly, governments are becoming convinced that forests can be a boon for rural livelihoods. Since the Bonn Challenge was launched, 58 countries have made formal pledges on reforestation, covering more than 650,000 square miles that they say will eventually capture the equivalent of almost half-a-year of global industrial CO2 emissions.

In Brazil, 82 percent of the promised restoration is actually monoculture plantations rather than natural forest.

But Lewis says many of these promises are misleading. His and Wheeler’s analysis of plans submitted to the Bonn Challenge secretariat and elsewhere, found that in Brazil, for instance, 82 percent of the promised restoration is actually monoculture plantations rather than natural forest. In China, the figure is 99 percent.

Long-maturing natural forests will eventually store typically 40 times more carbon than a plantation harvested once a decade. “Plantations hold little more carbon, on average, than the land cleared to plant them,” says Lewis. The same would apply to proposed plantations of forest to provide biomass for burning in power stations.

Agroforestry — defined as the integration and cultivation of trees on farms — is rather better, holding typically six times more carbon than monoculture plantations, though only a seventh as much as natural forests. Many African countries are committed to reforesting primarily through agroforestry, encouraging smallholders to plant non-timber trees such as mangoes, cashew, or cocoa in their fields.

A man harvests candlenut on an agroforestry farm in the province of West Nusa Tenggara, Indonesia. AULIA ERLANGGA/CIFOR

Backed by $1 billion from the World Bank, the Africa Forest Landscape Restoration Initiative aims to restore 386,000 square miles of forest by 2030, much of it on farmland. The model is Ethiopia, where in the wake of disastrous drought in the 1980s farmers have planted 2.5 million acres of trees among their crops in Tigray province alone.

Some nations have made big promises for restoring natural forests. They include Vietnam and India, both of which plan to meet more than 60 percent of their promised extensive reforestation this way. Under its 2018 draft forest plan, India intends to raise forest cover from the current 24 percent to 33 percent.

Even so, Lewis concludes, the preponderance of countries that plan to meet their commitments primarily through plantations or agroforestry means that they will only capture a fifth as much carbon as they would if they restored natural forests. He estimates they will capture around 16 billion tons, compared to the 200 billion tons that a recent IPCC report estimated would need to be removed from the atmosphere this century to help hold warming to 1.5 degrees Celsius (2.7 degrees Fahrenheit).

“If deforestation could be reduced, Africa could quickly become a significant carbon sink,” says one biologist.

But these calculations leave out one additional component, says Edward Mitchard of Edinburgh University, a co-author of Lewis and Wheeler’s paper. Largely unnoticed, many degraded forests are regrowing, capturing carbon and often retaining much of their old biodiversity. Mitchard has tracked how, as African farmers head for jobs in cities, their old fields are consumed by jungle. “If deforestation could be reduced, Africa could quickly become a significant carbon sink,” he told Yale e360.

Other researchers take a similar line. Philip G. Curtis, a consultant with the non-profit Sustainability Consortium, has estimated that only about a quarter of annual deforestation is permanent. Much of the rest — whether lost to fires, shifting cultivation, or logging — will eventually recover. One assessment estimates that the world contains some 7.7 million square miles of degraded land suitable for forest restoration, a quarter of it for closed forests and the remainder for “mosaic” restoration in which forests are embedded into agricultural landscapes.

Others argue that successful forest restoration will require much greater involvement — and control — by forest communities. If badly managed, taking land for reforestation can result in outright “green grab,” as earmarked land is handed over to outside corporations or even NGOs, according to Rebecca McLain a spokeswoman for the Center for International Forestry Research. “Tenure rights are often key.”

But the bottom line, says Lewis, is that “to stem global warming, deforestation must stop. And restoration programs worldwide should return all degraded lands to natural forests.” The danger, he says, is that by trying to smuggle tree plantations into global agreements on restoring real forests, governments are in danger of undermining what could still become the greatest story of ecological redemption in the 21st century.