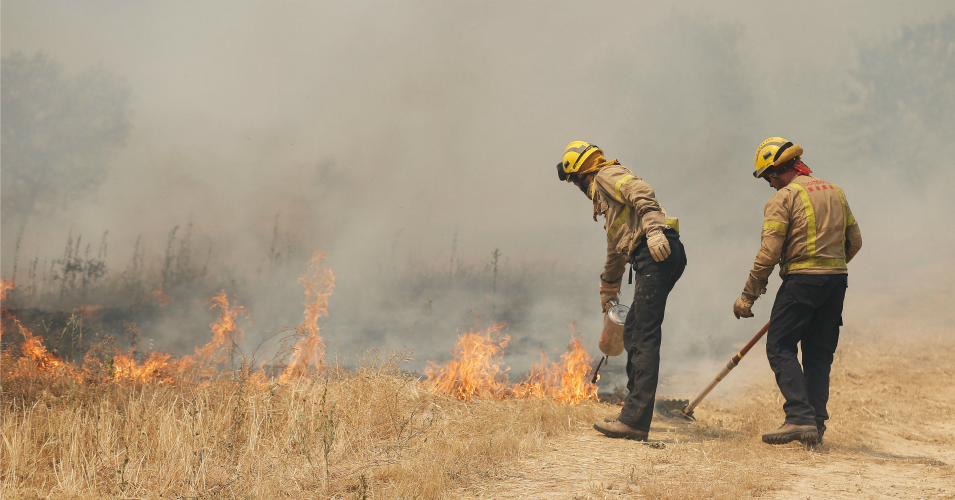 Firefighters try to extinguish a fire near Flix, Spain on June 27, 2019 as a forest fire raged out of control in the northeastern region of Catalonia and destroyed more than 5,500 hectares (13,500 acres). (Photo: Pau Barrena/AFP/Getty Images)

The heatwave, which has hit the continent earlier than in past years and has contributed to wildfires in Spain, is “absolutely consistent” with the climate crisis which is linked to the continued burning of fossil fuels by many of the world’s wealthy countries, the World Meteorological Organization (WMO) told Reuters.

“The heatwaves reaching Europe are proof that climate change is striking everywhere and it is a serious public health threat.”
—Antonio Guterres, U.N. Secretary-General

The WMO reported on Friday that the warm global temperatures in the first half of 2019 have so far made the year the third hottest on record, with 2015 to 2019 projected to be the hottest ever.

In France, the town of Eyguieres reported 114-degree heat on Friday. Hundreds of schools were closed across the country and families consumed a record-breaking amount of electricity at home, plugging in fans and air conditioners to cope with the heat. The country’s health minister warned against physical exercise during the hottest part of the day.

More than 500 firefighters in Spain battled the biggest wildfires the country has seen in 20 years, in Catalonia. The blaze had burned through more than 12,000 acres of land by Thursday and had forced 53 people to evacuate their homes.

The only comparable temperatures to hit Europe happened in 2003, meteorologist Eric Holthaus wrote on Twitter—when tens of thousands of people died.

This heat wave isn’t just a morbid curiosity. Only 5% of households in France have air conditioning. In the past, they didn’t need it.

The only other heat wave comparable to this week in European history was in August, 2003 — and 70,000 people died.https://t.co/CvJ6H2S5SD

Now, unofficially up to 44.6°C/114°F at Eyguieres, France — again, temperatures like these have never occurred before in any city on any day in recorded French history. pic.twitter.com/OlYM9xgskd

The continent’s unprecedented heatwave comes as temperatures have topped 122 degrees in parts of South Asia and the Middle East in recent weeks. As Common Dreamsreported, nearly 50 people died in single day in an Indian state as temperatures hovered around 113 degrees and caused numerous cases of heatstroke and other health issues.

As Common Dreams reported this week, world leaders are meeting Friday in Osaka, Japan for the G20 Summit, where a draft statement has already indicated that the countries will not give consideration to the decarbonization climate scientists say they must pursue to limit the warming of the planet.

According to Politico, President Donald Trump arrived at the meeting prepared to pressure Saudi Arabia, Brazil, Australia, and Turkey to oppose climate action commitments at the summit.

U.N. Secretary-General Antonio Guterres urged leaders to use the summit to push for a rapid shift away from fossil fuels and toward renewable energy sources to cut emissions by 45 percent over the next decade, as he planned to at the United Nations’ upcoming Climate Action Summit, beginning Sunday in Abu Dhabi.

“The heatwaves reaching Europe are proof that climate change is striking everywhere and it is a serious public health threat,” Guterres tweeted.

“The green economy offers countless benefits,” he added. “But to reap them we need rapid transition, deep transformation, and political will.”