‘Apocalypse Cow’ Is the Documentary Meat-Eating Environmentalists Need to See 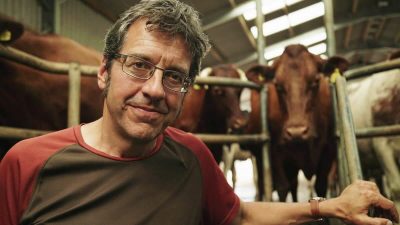 The program reveals meat production’s ongoing ecological destruction and cites lab-grown meat as its most likely replacement. Monbiot suggests creating this technology free from patents in order to maximize its impact and allow wider distribution.

In an accompanying article in The Guardian, Monbiot further addresses the environmental problems caused by intensive and extensive farming culture. He asserts that new technology and innovation will, ultimately, render traditional animal products redundant.

“Many people are rightly concerned about urban sprawl,” Monbiot explains in The Guardian. “But agricultural sprawl–which covers a much wider area–is a far greater threat to the natural world.”

“We are on the cusp of the biggest economic transformation, of any kind, for 200 years,” he wrote. “Before long, most of our food will come neither from animals nor plants, but from unicellular life.”

Monbiot is also a proponent of rewilding—large scale conservation aimed at creating new areas of biodiversity. In “Apocalypse Cow,” he argues that the subsidies currently supporting animal agriculture should instead be used for tree-planting and other conservation projects.

“Every hectare of land used by farming is a hectare not used for wildlife and complex living systems,” says Monbiot.

According to data collated by the makers of the environmental documentary “Cowspiracy” (2014), 18 percent of greenhouse gas emissions are caused by animal agriculture. This is more than the combined exhaust emissions from all transportation worldwide.

Livestock and their byproducts account for approximately 32,000 million tons of carbon dioxide per year—51 percent of all worldwide greenhouse gas emissions.

Animal agriculture also uses significant amounts of land, water, and other resources to produce food. It is the leading driver of species loss and ocean dead zones. In contrast, growing plant-based foods can be efficient, healthy, and sustainable.

A large-scale food production analysis in 2018 revealed that adopting a plant-based diet is the most effective way for an individual to mitigate the effects of climate change.

“Apocalypse Cow: How Meat Killed the Planet” aired on Channel 4 last week and is currently available to stream on All 4.