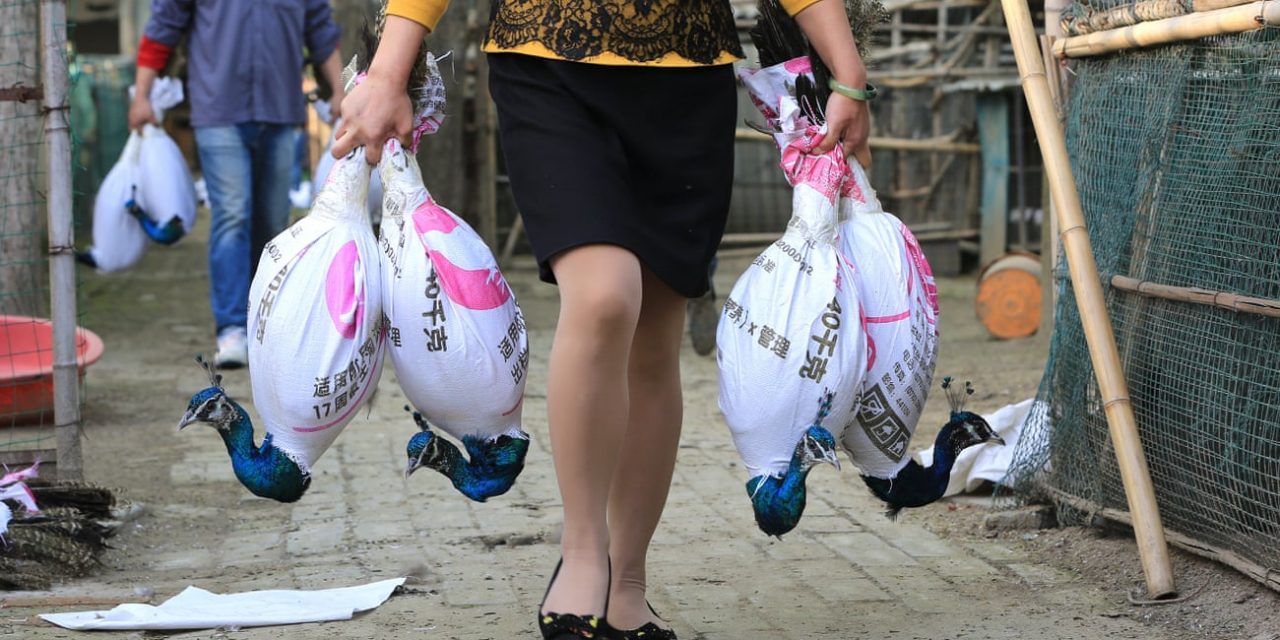 Freshly-slaughtered meat from wildlife and farm animals is preferred over meat that has been slaughtered before being shipped. Photograph: Visual China Group/Getty

Written by Michael Standaert  / The Guardian

Peacocks, porcupines and pangolins among species bred on 20,000 farms closed in wake of virus

early 20,000 wildlife farms raising species including peacocks, civet cats, porcupines, ostriches, wild geese and boar have been shut down across China in the wake of the coronavirus, in a move that has exposed the hitherto unknown size of the industry.

Until a few weeks ago wildlife farming was still being promoted by government agencies as an easy way for rural Chinese people to get rich.

But the Covid-19 outbreak, which has now led to 2,666 deaths and over 77,700 known infections, is thought to have originated in wildlife sold at a market in Wuhan in early December, prompting a massive rethink by authorities on how to manage the trade.

China issued a temporary ban on wildlife trade to curb the spread of the virus at the end of January and began a widespread crackdown on breeding facilities in early February.

The country’s top legislative officials are now rushing to amend the country’s wildlife protection law and possibly restructure regulations on the use of wildlife for food and traditional Chinese medicine.

The current version of the law is seen as problematic by wildlife conservation groups because it focuses on utilisation of wildlife rather than its protection.

“The coronavirus epidemic is swiftly pushing China to reevaluate its relationship with wildlife,” Steve Blake, chief representative of WildAid in Beijing, told the Guardian. “There is a high level of risk from this scale of breeding operations both to human health and to the impacts on populations of these animals in the wild.”

The National People’s Congress released new measures on Monday restricting wildlife trade, banning consumption of bushmeat and sales of wildlife for meat consumption at wet markets between now and the time the Wildlife Protection Law can be amended and adopted. Untouched however, are breeding operations for traditional Chinese medicine, fur and leather, lucrative markets known to drive illegal poaching of animals including tigers and pangolins.

For the past few years China’s leadership has pushed the idea that “wildlife domestication” should be a key part of rural development, eco-tourism and poverty alleviation. A 2017 report by the Chinese Academy of Engineering on the development of the wildlife farming industry valued the wildlife-farming industry those operations at 520bn yuan, or £57bn.

Just weeks before the outbreak, China’s State Forestry and Grassland Administration (SFGA) was still actively encouraging citizens to get into farming wildlife such as civet cats – a species pinpointed as a carrier of Sars, a disease similar to Covid-19. The SFGA regulates both farming and trade in terrestrial wildlife, and quotas of wildlife products – such as pangolin scales – allowed to be used by the Chinese medicine industry.

“Why are civet cats still encouraged to [be eaten] after the Sars outbreak in 2003? It’s because the hunters, operators, practitioners need that. How can they achieve that? They urged the government to support them under the pretext of economic development,” Jinfeng Zhou, secretary-general of the China Biodiversity Conservation and Green Development Foundation (CBCGDF), told the Guardian.

On state TV the popular series Secrets of Getting Rich, which has aired since 2001, often touts these kinds of breeding operations – bamboo rats, snakes, toads, porcupines and squirrels have all had starring roles.

But little was known about the scale of the wildlife farm industry before the coronavirus outbreak, with licensing mainly regulated by provincial and local-level forestry bureaus that do not divulge full information about the breeding operations under their watch. A report from state-run Xinhua news agency on 17 February revealed that from 2005–2013 the forestry administration only issued 3,725 breeding and operation licenses at the national level.

But since the outbreak at least 19,000 farms have been shut down around the country, including about 4,600 in Jilin province, a major centre for traditional Chinese medicine. About 3,900 wildlife-farming operations were shuttered in Hunan province, 2,900 in Sichuan, 2,300 in Yunnan, 2,000 in Liaoning, and 1,000 in Shaanxi.

Neither do reports offer much detail about the shutdowns and what is happening to the animals, although Blake said he does not think animals are being culled, due to issues over compensation.

Chen Hong, a peacock farmer in Liuyang, Hunan, said she is concerned about her losses and whether she will get compensation after her operations were suspended on 24 January.

“We now aren’t allowed to sell the animals, transport them, or let anyone near them, and we have to sanitise the facility once every day,” Chen said. “Usually this time of year would see our farm bustling with clients and visitors. We haven’t received notice on what to do yet, and the peacocks are still here, and we probably won’t know what to do with [them] until after the outbreak is contained.

On a visit to Shaoguan, Guangdong province, last year, the Guardian and staff from CBCGDF saw a caged facility previously used for attempted breeding of the notoriously hard-to-breed pangolin.

While there were no longer pangolin at the site, several locals near the facility confirmed the species had been raised there, along with monkeys and other wildlife.

Besides being used for Chinese medicine, much of the meat from the wildlife trade is sold through online platforms or to “wet markets” like the one where the Covid-19 outbreak is thought to have started in Wuhan.

“All animals or their body parts for human consumption are supposed to go through food and health checks, but I don’t think the sellers ever bothered,” said Deborah Cao, a professor at Griffith University in Australia and an expert on animal protection in China. “Most of them [have been] sold without such health checks.”

There have been calls for a deep regulatory overhaul to remove the conflicting duties of the forestry administration, and for a shift in government mindset away from promoting the utilisation of wildlife and towards its protection.

“The ‘referee-player’ combination needs to be addressed and is the toughest [challenge],” Li Shuo, a senior campaigner at Greenpeace East Asia told the Guardian. “This goes back to the institutional identity [of the SFGA] which was established to oversee timber production. Protection was an afterthought.”

Proposals include fully banning trade in wildlife that is protected or endangered within and outside of China, plus bans on raising and selling meat from known carriers of diseases that can impact humans such as civets, bats and rodents.

There are concerns that in trying to prevent outbreaks authorities may go too far in the culling of wild animals that can carry disease.

“Some law professors have suggested ‘ecological killing’ of disease-transmitting wild animals, such as pangolins, hedgehogs, bats, snakes, and some insects,” Zhou said. “We believe lawmakers need to learn [more about] biodiversity before advising on the revisions to the law, or they’ll bring disaster.”