Researchers discovered the Zika virus in the Zika forest of Uganda – in 1947. It is a virus not much different than the viruses causing dengue, yellow fever, Japanese encephalitis, West Nile fever, and St. Luis encephalitis. The Zika virus eventually spread throughout most of the world. Mosquitoes carry and spread the Zika virus. But for decades the Zika disease afflicting humans was free of brain deform or the shrinking of the infant’s brain  known as microcephaly (a Greek term meaning tiny brain-head) […]

So, what caused the tiny brains of Brazilian babies during the 2016 Summer Olympics? The Zika virus-infected mosquitoes or pesticides sprayed intensely in the environment, including in the drinking water of the urban slum mothers afflicted by the Zika virus? […]

In a February 2016 report, [a group of scientiest] argued that the Zika disease in Brazil, and other tropical countries, is not simply a disease of infected mosquitoes stinging pregnant women. They saw the Zika disease as a symptom of a much larger pathology: that of deforestation, the destruction of flora and fauna, massive pesticide sprayings of the natural world and cities, ecological imbalance, global warming and inequality […]

They reported that there are countries like Colombia where the Zika virus causes disease but not microcephaly. In Brazil, however, the population that suffers from the Zika virus disease and, potentially, from microcephaly, has been drinking water intentionally treated with pyriproxyfen. This is a potent teratogen that causes monstrous changes in the development of the mosquito, foreclosing its chance of growing normally.

Experts describe pyriproxyfen as an “insect growth regulator” – an apt name for a chemical made up of insect parts and chemicals formulated into a biological bomb: destroying the insect from within: wrecking the insect’s embryogenesis and metamorphosis to adult.

This powerful biological weapon — that annihilates mosquitoes or other insects – is not benign to humans drinking it in their water or exposed to it in any other way like in spraying it against mosquitoes. In fact, it harms human blood and the liver.

The physicians from Argentina and Brazil urge us to get off our horse of hubris and think in biological terms. About 60 percent of our genes are identical to the genes of insects like the Aedes aegypti mosquitoes that potentially carry the Zika virus. In addition, they emphasize our evolution – going from the zygote to embryo to fetus to newborn — is not that much different than the development process of the mosquito: larva-pupa-adult.

The implications of this biology, including the effects of pyriproxyfen on mosquitoes, are frightening. It is not out of the question that, under certain conditions, like massive and chronic sprayings of the environment, pyriproxyfen could probably do to people what it does to mosquitoes. It has the potential of becoming a “human growth regulator.” Is microcephaly one of the deadly consequences of that potential? […]

Many of the chemicals targeting mosquitoes are endocrine disruptors, weakening the immune system of the exposed population. So, adding pyriproxyfen to that soup of chemicals and adding it to the drinking water and intimate environment of impoverished slum dwellers, you are asking for big trouble: the birth of babies with tiny brains. 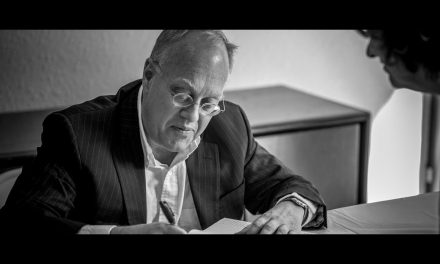 Chris Hedges On The Rise & Fall of the U.S. Empire