Consumers are ditching plastic, and companies are following suit. Major brands like Starbucks and McDonald’s have announced plans to eliminate plastic straws. IKEA has committed to eliminating all single-use plastics from its cafes. Countries are banning plastic bags as well. Why? Primarily out of concern for our oceans.

In 2017, a video of a turtle with a straw stuck in his nose went viral. The public expressed growing concern for the state of our oceans, as plastic is quickly outnumbering the amount of fish in the sea. And it’s a valid cause. But what is the main driver of ocean plastic? Organization Ocean Clean Up revealed that close to 50% of the plastic debris in our oceans is abandoned fishing gear.

Stray nets left behind by fishing boats are extremely dangerous to sea creatures, as they can easily get trapped and drown. Entanglement is one of the leading causes of death for whales and other marine animals, causing roughly 300,000 deaths annually. Bycatch is another concern related to the fishing industry. Dolphins, whales, and other non-target fish get trapped in fishing hauls, and often die as a result.

What can you do? Consider your food choices. There are many vegan seafood options on the market, and restaurants have even started making vegan fish & chips. Clean Meat company BlueNalu is hoping to launch cultured seafood in the near future. 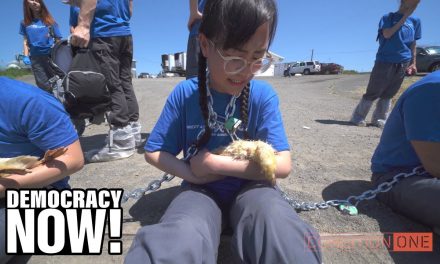