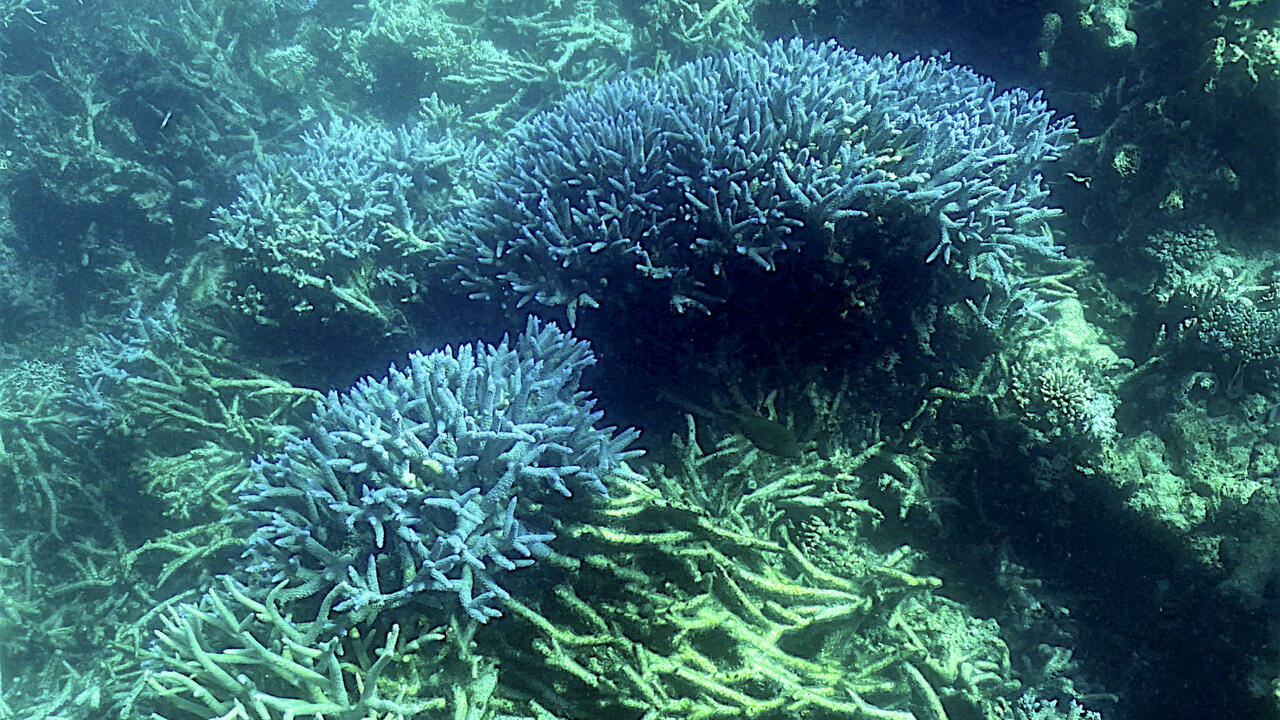 “Five bouts of mass bleaching since 1998 have turned the Great Barrier Reef (GBR) into a checkerboard of reefs with very different recent histories, ranging from two percent of reefs that have escaped bleaching altogether, to 80 percent that have now bleached severely at least once since 2016.” (Source: T. Hughes, ARC Centre of Excellence for Coral Reef Studies: 98% of the Great Barrier Reef Has Been Affected by Coral Bleaching, World Economic Forum, November 15, 2021)

Recent news of another (the 6th) bleaching event at the Great Barrier Reef is but one more example in a long list of recent climate-related events that depict a scenario that can only be described as triple-alarm climate emergencies, as ecosystems breakdown across the world.

But, those breakdowns are not happening where people live. Therefore, other than scientists, who sees cascading ice sheets, crumbling permafrost, tens of thousands of Alaskan and Siberian thermokarst lakes bubbling methane, Greenland’s Helheim glacier cascading into the sea, or depleting ocean kelp forests amongst horrendous loss of prime fishing stock at crucial northern latitudes?

It was only a couple of months ago that this grisly description was carried by the LA Times: “Forces profound and alarming are reshaping the upper reaches of the North Pacific and Arctic oceans, breaking the food chain that supports billions of creatures and one of the world’s most important fisheries.”(Source: Susanne Rust, Unprecedented Die-offs, Melting Ice: Climate Change is Wreaking Havoc in the Arctic and Beyond, Los Angeles Times, December 17, 2021)

Here’s another recent event that’s nearly impossible to grasp:  A study in Canada showed the enormous impact of heat, as an estimated one billion sea creatures off the coast of Vancouver died because of excessive ocean heat. According to Professor Christopher Harley, University of British Columbia: “I’ve been working in the Pacific Northwest for most of the past 25 years, and I have not seen anything like this here. This is far more extensive than anything I’ve ever seen.” (Source: Heat Wave Killed An Estimated 1 Billion Sea Creatures, And Scientists Fear Even Worse, NPR Environment, July 9, 2021)

All of which brings into focus an obvious query: Do deteriorating ecosystems on the frontiers of civilization forewarn of trouble for society at large?

The general public sees the issue in sharp contrast to the true impact of global warming, e.g., a New York Times, The Morning headline d/d April 3rd: “Good Morning, We Have Reason For Hope on Climate Change,” but the text is full of generalities, not at all convincing. It does, however, soothe nerves of passive readers, and it does offer “hope.”

The NYT article also implicitly suggests that doom and gloom articles are counterproductive, blah, blah, blah. Well, yes, of course that is (maybe) true. And, it also sparks fear. Unfortunately, the real world works that way in the presence of existential risk to complex life in the face of universally advertised false hope, which has not even come close to fixing the climate change issue. Fossil fuel consumption has roughly doubled since 1980 and remains at 75% of all energy production, same as 50 years ago. (Source: Our World in Data, Fossil Fuels)

All of which means it’s a mistake to whitewash reality, especially when the truth, not hope, dictates immediate remediation efforts, assuming that’ll even work. Moreover, when is it too late to do something?

The International Union for Conservation of Nature (“IUCN”) classifies the Great Barrier Reef to be in “critical condition.” Global warming is devastating this UNESCO World Heritage site. The crux of the issue is ocean heat sequences relentlessly pounding the reef before it can catch its breath long enough to recover.

Furthermore, an IPCC report post-Glasgow (Nov. 2021) featured an article entitled: “The Great Barrier Reef is in Crisis.” Hundreds of peer-reviewed scientific papers claimed: “Coral reefs are on the verge of extinction.” That is reality! That’s scary. That demands immediate worldwide attention. Can oceans be cooled down?

Moreover, numerous reports claim, “with extremely high confidence” several natural systems in Australia, especially the Great Barrier Reef “have already undergone irreversible damage,” which is supportive evidence that a worldwide climate emergency is passing us by without so much as a whimper by most of the world’s political leaders in the face of science screaming “danger immediately ahead.”

According to Nature World News d/d March 26th 2022: ”Authorities reported last week that higher-than-average temperatures had caused significant bleaching in portions of the reef in yet another season of heat damage.”

Reef specialist Scott Heron, Ph.D. of James Cook University, which is widely recognized as the top institution in the world for citations in coral reef science: “There are portions of the reef that are in such bad shape that there is no chance of coral bleaching this year because there are so few corals remaining… This decade, we need to take immediate action on climate change,” Ibid.

Nevertheless, most countries, as well as the IPCC, are targeting net zero emissions by 2050 to hopefully stay under 1.5C/2C, but seriously, who really knows for sure? Temperature boundaries of 1.5C/2C post-industrial are highly controversial issues with some scientists claiming we’ve already breached the IPCC’s boundaries. Indeed, want some evidence? The GBR is a prime example of excessive global warming at work, as explained in more detail, as follows.

The Great Barrier Reef Marine Park Authority has been conducting monitory flights over the entire length and width of the 2,300-kilometer (1,429 mi.) reef, following in the footsteps of five major bleaching episodes, circa 1998, 2002, 2016, 2017, and 2020, all triggered by rising ocean temperatures and setting all-time temperature records since 1905.

According to Professor Hughes of James Cook University: The current sixth bleaching “that’s underway is not moderate or confined,” Ibid.

Research scientist Neal Cantin of the Australian Institute of Marine Science Sea claims surface temperatures around the Great Barrier Reef have been higher than normal with some temperature anomalies more than 3.5° Celsius (6.3° Fahrenheit) above average. (Source: The Great Barrier Reef is Bleaching — Once Again – and Over a Larger Area, Mongabay, March 25, 2022) Footnote: It should be noted that 3.5°C above baseline on land is a potential killer of terrestrial life.

Richard Leck, the head of oceans and sustainable development at WWF-Australia says: “At this stage, we’re averaging a bleaching event more than once every two years, which is really climate change writ large… To have those events happening so regularly, it really isn’t giving the reef the time it takes to recover,” Ibid.

– Scientists say urgent action on climate change is needed if the world’s largest reef system is to survive.

-There are particular concerns that this bleaching event has occurred in the same year as a La Niña weather phenomenon. Typically in Australia, a La Niña brings cooler temperatures.

At some point in time this tragic story will come to an end by either: (a) lights-out for one of the planet’s greatest natural assets or (b) the nations of the world join forces in a unified wartime effort to halt fossil fuel emissions well before 2050… but, will that really happen… and in enough time… and when is it too late?

Artifishal: New Film Asks, Have We Reached the End of Wild?