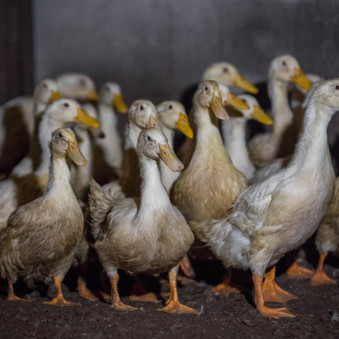 Pekin ducks being ‘farmed’ for their dead flesh. Image by Jo-Anne McArthur / We Animals

Published by There’s an Elephant in the Room Blog

Ducks. As a child I used to love visiting duckponds. It was a Sunday treat and few children of my generation in my part of the world haven’t been enchanted by ‘going to feed the ducks’, clutching a bag of bread scraps, encouraged to be gentle, to stay still and quiet in the hope that they’d come close so we could admire them. These memories linger, visions of a lost childhood when I thought the world was a place of beauty and wonder.

A childhood when, like most of us, I was being systematically groomed and corrupted to respect other species without making the connection between them and the corpses, breastmilk and eggs on my plate. Oblivious to the barbarity of my species, I had no clue what was really in store for the majority of ducks, and the world became a blacker and more sinister place for my knowing.

As with rabbits, almost every cooking series on TV includes some dish(es) made of the flesh of these gentle and sociable birds. Programme participants nibble morsels, seemingly pleased when the dismembered flesh is still red and bloody, their affectations completely disconnected from the terrified, panicking individual who so much wanted to live but was suspended upside down from shackles before their throat was hacked open to bleed them to death. Bleeding to death (exsanguination) is how all our victims are killed. It is violent, gory and agonising. Always.

The small, headless, footless and featherless corpses in the supermarkets were once like these in the image, not living as we think of the word but simply existing; being kept alive in the most economical way until they reach approximately 8 weeks of age and are trucked to slaughter. Although deprived of the ability to bathe, swim or indulge their natural behaviour, the issue is not the environment in which we keep them while they await their unnecessary deaths. The issue is that we have no need whatsoever to make victims of fellow creatures who desperately don’t want to die.

The number of these charming birds slaughtered daily is dwarfed only by the number of chickens who meet our rough hands, electrified tanks and blades. Every single day, almost 8.2 million individual ducks are executed globally.

All of these things that we do as a species, are manifestations of  speciesism; the delusion that all other species exist for our use and that we need have no concern or justification for our actions, however monstrous, however obscene.

All it takes is a moment to decide that no more innocents will quake in terror on our account and say, ‘Not in my name’.  Make that decision today. Decide to be vegan. 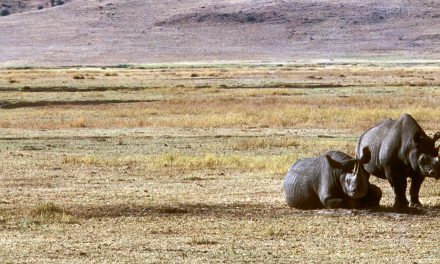