‘To Finish’; Looking at Language

Written by There’s an Elephant in the Room Blog 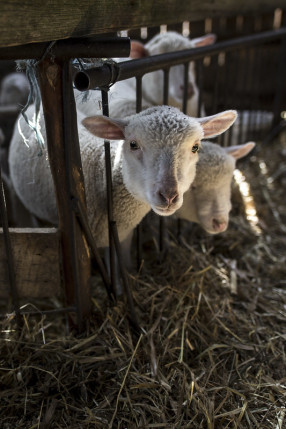 ‘Finishing’ is yet another of the words with which the animal use industry glosses over the monstrous activities of our species.

‘Finishing’ is part of the practice of making victims out of gentle and defenceless individuals for nonvegan consumers to eat their bodies or use them to death. Largely unchallenged and mistakenly thought to be bucolic and wholesome, the activities inherent in ‘farming’ innocent lives and bodies for financial gain are so inherently brutal that it’s littered with such euphemisms. Every challenge is met by the industry with rhetoric about ‘welfare‘, another glossy euphemism that has zero to do with victim wellbeing and everything to do with easing consumer conscience so they keep on spending.

These are the soothing, feel-good words of a business that absolutely depends on preventing the consumers who pay them from realising that what’s actually happening on their behalf is an affront to all that’s decent; the words of a business that – by its very existence – goes against every value we all think we have; values like the appreciation of fairness, respect for the lives and habitats of other animal species and contempt for those who cause needless harm to defenceless, innocent creatures.

Finishing. It sounds so cosy and wholesome, doesn’t it? Finished; like adding the final touches to a new garment, plumping sofa cushions and tweaking the curtains in a newly decorated room.

Except that we’re not talking about garments or rooms. We’re talking about the premeditated, violent, gory and unnecessary killing in cold blood of defenceless young creatures, mere infants in most cases. The focus is on maximising the profit that can be made from the selling of their corpses and body parts once their warm throats have been hacked open and once everything that they have has been wrenched from them in terror and agony.

The ‘finishing period’ is when members of such species as sheep, cattle and pigs whose bodies are destined to be eaten by humans, are fed an energy-dense diet so that they will grow rapidly, adding muscle/flesh to their frame and optimising fat cover in preparation for their slaughter. ‘Finishing’ relates to a period of several days or weeks immediately prior to the slaughterhouse ordeal that we inflict on all our land-based victims, and it’s done for the purpose of getting a ‘good conformation of carcass and a favourable price’ to quote the industry’s own words.  As always, follow the money. It’s a business. ‘Farming’ defenceless creatures is a million miles away from being the ‘labour of love’ that we’re indoctrinated to think it is.

Once we realise that our victims are sentient like ourselves, with friends, families, minds and lives that matter to them; once we accept the science that using and consuming other individuals is unnecessary for our own wellbeing, as well as being ecologically unsustainable, many – like me – can scarcely believe how we’ve been taken in, funding a gore-spattered nightmare for so long without stopping to consider the consequence of what we put in our supermarket trolleys.

How about making the decision to finish taking part in such horror and become vegan? It makes perfect sense.