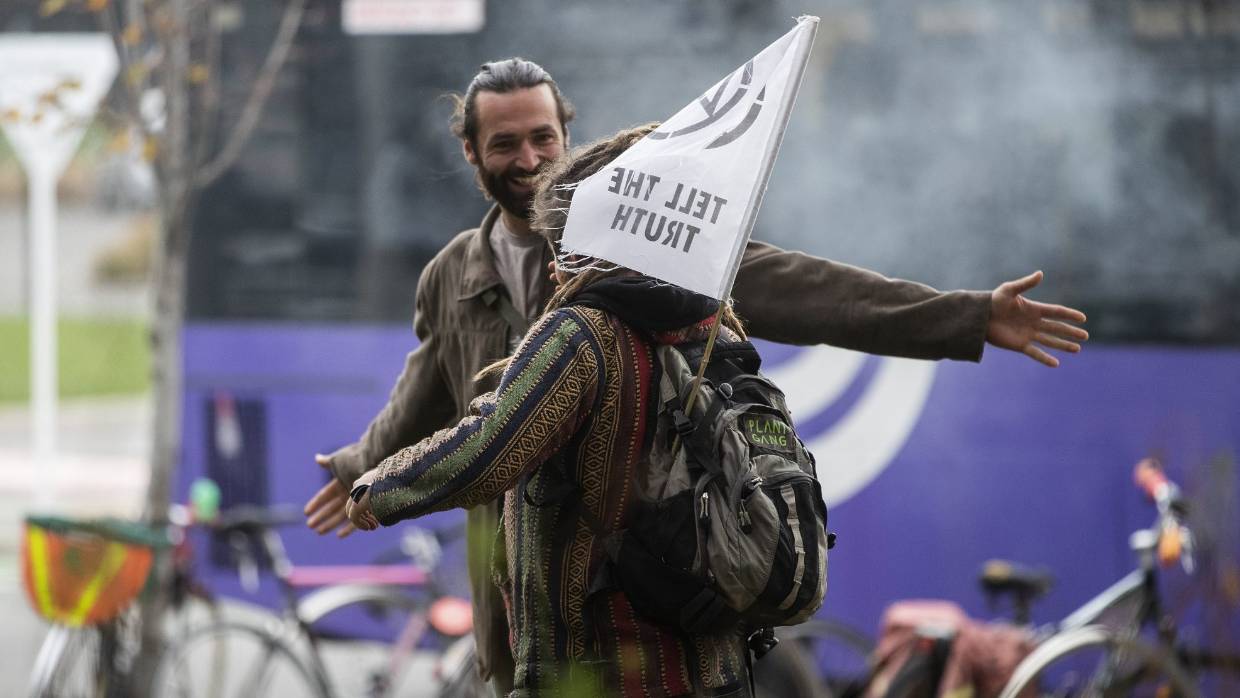 Happy reactions from members of the gathered crowd following the decision by ECan to declare a "climate emergency". JOSEPH JOHNSON/STUFF

Canterbury’s move into a state of “climate emergency” was met with rapturous applause from those who encouraged Environment Canterbury (ECan) to be the first council in the country to make the declaration.

At 11.49am on Thursday, Environment Canterbury (ECan) councillors voted and made history, watched on closed-circuit television outside by 100 or more placard-waving, drum-banging and chanting activists and by staff, climate change advocates, members of the public and media inside the council chamber.

It was veteran former Environment Court judge, Cr Peter Skelton, whose speech of support tipped the list of those in favour over to six councillors out of 11.

ECan chairman Steve Lowndes declared a conflict of interest as a Facebook member of Extinction Rebellion (XR) Ōtautahi and recused himself from the chair for the debate, with deputy chairman Peter Scott replacing him.

XR Ōtautahi spokeswoman Shere Khan Silver told Stuff “we are all feeling this is fantastic”.

“It’s an excellent first step. But we are not going to get into self-congratulatory mode just yet. This is just the tip of what needs to start changing.”

Sunckell said he understood the science but said “shooting the cows is not the option”.

“To pick on that society, that community, and say they must focus heavily on reducing the gases, I cannot accept.”

McKay said ECan had “already shown its leadership in its own mitigation efforts”.

“I believe this organisation is fulfilling its obligations and what we are doing is clearly outlined in the background paper. But can we meet the wide and varied expectations of the public without funding? I’m concerned that this council hasn’t had that wider conversation to get a mandate.

“I’m really proud of the work this organisation does. But I don’t want us to let you down by not delivering.

“If nothing can be, or is able to be, changed, then this is a very hollow gesture. This is not a political decision, but one based on values and ethics. As a governor of this council, symbolic gestures without the ability to make many of the changes called for is simply not good governance.”

Cr Lan Pham​, who moved the recommendation from chief executive Bill Bayfield to declare the climate emergency and also summed up the debate, said declarations of climate emergencies around the world could be described “largely as symbolic”.

“Absolutely, at face value, they are. My hope for this declaration is that it acts as a snowball effect.

“Today is just the beginning. Leadership of Canterbury’s environment is ultimately what this council is tasked with.”

She thanked Extinction Rebellion, School Strike 4 Climate and all those who cared deeply about the environment, but said she was disappointed some fellow councillors were considering voting against a declaration.

“Everyone is recognising that the issues are so much broader than shooting cows – that’s a really narrow view.

“I’m really disappointed that those kind of views have pushed you (Sunckell) away from being part of this today.

“To those who are considering voting no to the declaration, I really want to emphasise that tackling climate disruption will take all of us.”

ECan had, with many other councils, signed up to a climate change declaration in 2017.

“The only difference… is the use of the word ’emergency’. For me, this is a relatively easy decision and I will support the motion.”

Scott said after the meeting he was “really quite happy” to have got through the work leading up to the declaration.

He thanked ECan staff for their efforts in providing councillors with all the information.

In council papers, Bayfield had said a climate emergency would allow the council to highlight the importance of climate change in everything it did, even though the status had “no statutory or legal weight” for decision-making.

XR Ōtautahi’s climate-emergency target is to achieve a zero carbon economy by 2025.

Nelson City councillors were expected to debate a similar declaration at their meeting on Thursday afternoon.

A Christchurch City Council committee is also scheduled to discuss the issue on Monday.