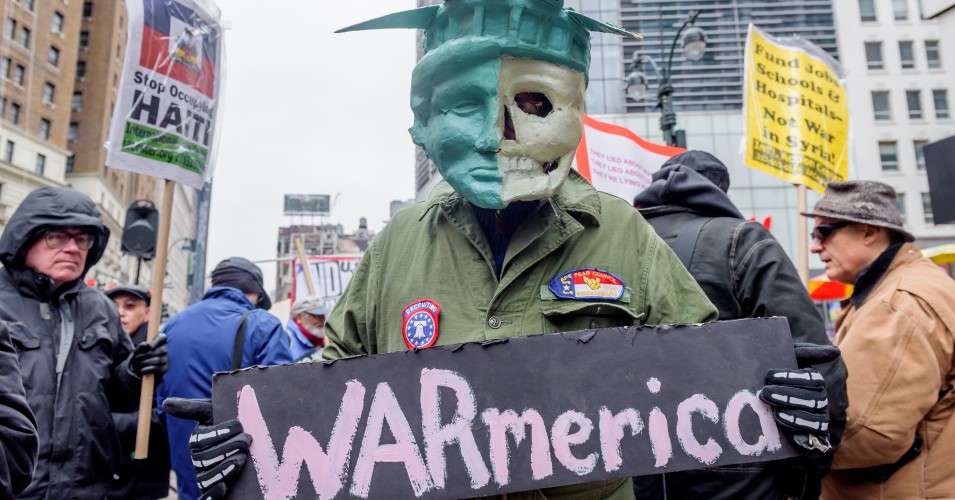 Fighting this war is as much a matter of demobilization—reversing courses of action, shrinking our carbon footprint—as it is mobilizing green energy production and rebuilding society around a green consciousness. (Photo by Erik McGregor/Pacific Press/LightRocket via Getty Images)

This is not a mere moral abstraction, something to do because it’s right and good. We will disappear as a species if we don’t—no matter how much money we have.

I was utterly stunned when I read these words of former Wisconsin senator William Proxmire, quoted in an essay by William Hartung, not because of the point he was making — like, what else is new? — but because he said them in . . . 1969.

Oh my God, fifty years ago!

This is basically the span of my adulthood. I was so young and revved up in 1969 — a hippie and idealist, a true believer in social change. We’d just defeated Jim Crow racism and antiwar consciousness was spreading across the nation, soon followed by the women’s rights movement, the gay rights movement and environmental awareness. A new day was dawning! I could feel it in every fiber of my being. Even politicians were standing up, being counted.

For an instant, as I read Proxmire’s words, I remembered the bubble before it burst. Then I was overwhelmed with a sense of collective failure. When it comes to the culture of war, nothing has changed. Indeed. military-industrial financial leverage has grown enormously over the last half century, quietly consuming American democracy along the way.

As Hartung writes: “. . . there’s no question that spreading defense jobs around the country gives weapons manufacturers unparalleled influence over key members of Congress, much to their benefit when Pentagon budget time rolls around. In fact, it’s a commonplace for Congress to fund more F-35s, F-18s, and similar weapons systems than the Pentagon even asks for. So much for Congressional oversight.”

The “world’s greatest democracy” has morphed, over the course of my lifetime, into a money-driven military-industrial monstrosity, waging pointless wars, selling arms to the world, expanding its prison archipelago and generating endless wealth for the powerful.

So much for hope. So much for any possibility of a sane, nuke-free, united planet. The “world’s greatest democracy” has morphed, over the course of my lifetime, into a money-driven military-industrial monstrosity, waging pointless wars, selling arms to the world, expanding its prison archipelago and generating endless wealth for the powerful — all the while insulated from public scrutiny by the mainstream propaganda industry, which shrugs and calls it all self-defense and situation normal as it serves up endless distractions to Spectator Nation.

But as I reflected on the extent to which money rules — and how we have quietly transitioned as a nation and as a planet to endless war, solely for the benefit of those who profit from it — I saw a light of hope coming from the oddest direction imaginable.

It’s called climate change. It’s called environmental disaster, existential crisis, the creation of an uninhabitable planet. Where “flower power” failed to change the world half a century ago, global warming, melting icecaps and rising oceans — even if they don’t obliterate civilization — will eventually strip money of its power to exploit the planet and do what it wants. Change is coming, no matter how many defense-industry lobbyists there are attempting to shape national politics.

Maybe climate change will “win,” but even if it does, nothing else, as far as I can tell, has the power to force humanity to think so utterly out of the box — by which I mean beyond the borders of nations — and to begin transitioning to a one-planet consciousness.

Here’s where we are today, as reflected in the tweets of Donald Trump: “So interesting to see ‘Progressive’ Democrat Congresswomen, who originally came from countries whose governments are a complete and total catastrophe . . . now loudly and viciously telling the people of the United States, the greatest and most powerful Nation on earth, how our government is to be run. Why don’t they go back and help fix the totally broken and crime infested places from which they came?”

This, of course, is the president raging against four newly elected congresswomen — Alexandria Ocasio Cortez, Ayanna Pressley, Rashida Tlaib and Ilhan Omar — who have had the courage to stand up to him and have pushed for a sane environmental policy called the Green New Deal. His rant reveals caged thinking at its most blatant: thinking trapped in the borders of racism and nationalism, precisely the kind of thinking that has driven 500 years of Western domination and exploitation.

Trump talks and tweets in defiance of the rules that have emerged over the last 50 years, a.k.a., political correctness, the point of which is to hide global exploitation, war profiteering and the death of democracy behind a cliché-ridden cover story of respect for everyone.

The unspoken assumption behind this cliché is that national borders are as basic to the makeup of the planet as oceans, rivers and mountains. Human beings are defined by the nations in which they live and all problems we face are addressed either within the confines of our borders or in a state of national unity in violent opposition to the behavior of a “foreign” nation.

But climate change is a phenomenon that cannot be addressed in such a limited mindset, even though this is how the discussion begins. The economist Joseph Stiglitz, for instance, writing last month in The Guardian, noted that the term Green New Deal honors the massive response by FDR to the Great Depression of the ’30s—the New Deal—but pointed out: “An even better analogy would be the country’s mobilization to fight World War II.

“Critics ask, ‘Can we afford it?’ . . . Yes, we can afford it, with the right fiscal policies and collective will. But more importantly, we must afford it. The climate emergency is our third world war. Our lives and civilization as we know it are at stake, just as they were in the second world war.”

While this is absolutely true, Stiglitz doesn’t go far enough. He fails to ponder what it means that this is not a “war” against anything or anyone except the natural consequences of destructive behavior: behavior that is at the foundation of Western, if not global, civilization. Fighting this war is as much a matter of demobilization — reversing courses of action, shrinking our carbon footprint — as it is mobilizing green energy production and rebuilding society around a green consciousness.

And a serious part of this new consciousness must be addressing what it means to live as part of one global community that is in peril from the consequences of exploitative human behavior. This is not a mere moral abstraction, something to do because it’s right and good. We will disappear as a species if we don’t — no matter how much money we have.

We have to start revering the whole planet, indeed, thinking as one planet, and valuing the people on both sides of the border. All of us are equal. At some point, even the war profiteers and the politicians they presume to own must wake up to this.