Spain’s Cruel Bullfights Have No Place in the 21st Century 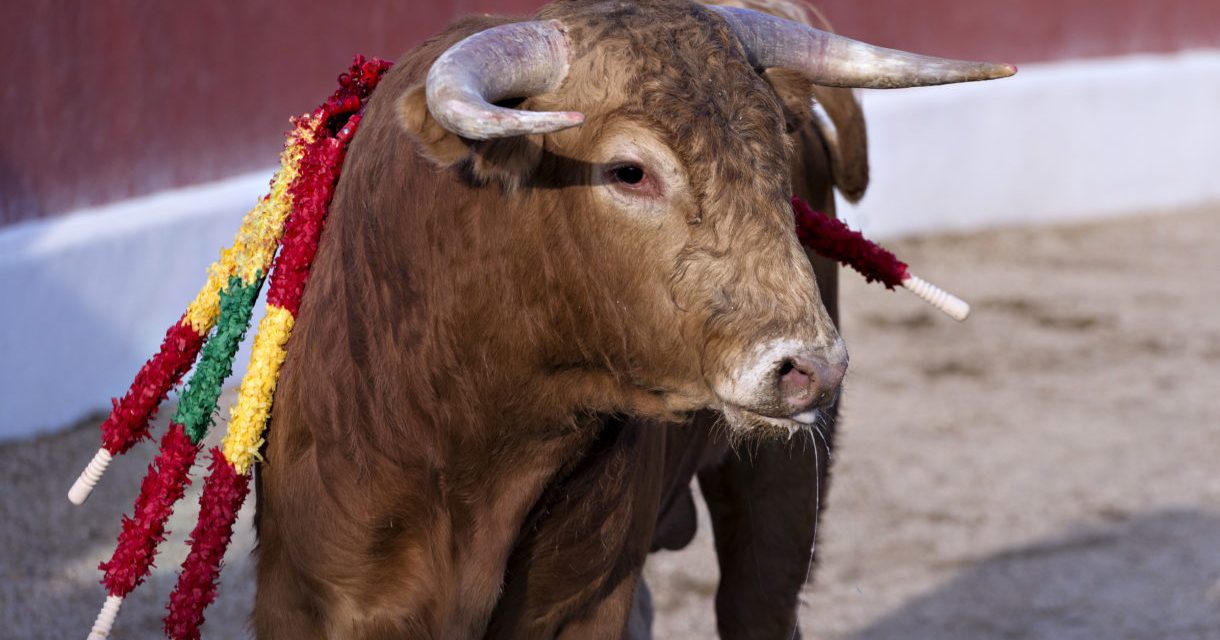 The bulls are herded along the 875-meter route into a bullring where they are tormented and stuck with spears as part of a bullfight and will die slow, excruciating deaths. Photo by Syldavia/iStock.com

The annual running of the bulls at Pamplona has just come to a close in Spain, where I am traveling for work. With the San Fermin festival now over, the world can once more take account of the scores of bulls chased, tormented and killed for the most frivolous entertainment and thrills.

This year, the bull runs produced eight gorings (one of the victims was taking a selfie) and altogether 35 individuals were treated for broken bones and fractures, but it’s really a wonder that there aren’t more injuries at Pamplona. Every morning, for a whole week, groups of bulls are chased by hordes of spectators, who noisily jeer, prod and taunt the frightened animals as they run, surging through the narrow, cobbled streets and often slipping and falling. The bulls are herded along the 875-meter route into a bullring; they’ll be tormented and stuck with spears as part of a bullfight later the same day and will die slow, excruciating deaths.

Polling by Humane Society International has shown that a majority of Spaniards oppose bull fiestas and bullfighting, as well as the use of their tax dollars to promote them. Across the country progressive politicians are working to halt the flow of public money to fund these cruel events, and the public is turning its back on fiestas and bullfights. Two of the country’s autonomous communities – Catalonia and the Balearic Islands – have even banned bullfights in past years, although the Spanish government challenged the bans and the country’s constitutional court overturned them, essentially bringing reform efforts to a standstill.

Each year, a million tourists flock to Pamplona for the running of the bulls, and tourism revenue is no doubt a powerful lure for keeping this event alive.

In the end, however, it’s simply wrong, and for every tourist who wants to see a race through the streets or a bullfight, there are many more who don’t want to see animals suffer and die. Animal cruelty of this kind should have no place in our world today, even when it appears in the guise of tradition. The world is waking up to the moral cost of animal cruelty, and while the fight may be a little harder when we’re up against long-entrenched traditions, we’ve learned and we’ve demonstrated that it’s possible to win the day against such bloody spectacles.

For example, we’ve worked successfully in Mexico to end the cruel Kots Kaal Pato festival where ducks and other small animals were strung up like pinatas and crowds of men lined up with sticks to beat the animals to death or to cut off their heads. In the Honduran city of San Marcos de Colon, we’ve ended the Carrera del Pato y del Gato where cowboys on a horse race under a duck hanging upside down with the goal of tearing off its head. The event also involves a cat tied above with money stuck to him, and the cowboys try to snatch the money as they pass.

In India, we’ve ended bulbul (songbird) fights at festivals in the northeastern state of Assam, and reduced buffalo fights by 80 percent.

Even on bullfighting, we’ve made good progress, particularly in Mexico. Four Mexican states now ban bullfighting, including Sonora, Guerrero, Coahuila and Quintana Roo, which passed a ban just this year that must be signed into law by the state’s governor. A poll found that nearly three-fourths of Mexicans support a nationwide ban and last year, legislation was introduced in Mexico City to ban bullfighting.

Tradition and tourism are not excuses for animal cruelty. Increasingly, consumers are also beginning to shy away from travel experiences that involve animal cruelty. It’s time for Spain’s politicians – and its travel industry — to wake up to modern sensibilities on this issue, listen to Spanish citizens and help foster respect for all sentient animals by ending cruel blood fiestas and bullfights once and for all.

It is also time for tourists from around the world to drop this grotesque and absurd festival from their bucket lists.