At the invitation of the UK government, this week Saudi representatives are buying bombs in London at DSEI, the world’s largest weapons fair, and the state-owned arms company, Saudi Arabian Military Industries (SAMI), is exhibiting its equipment to equally unscrupulous regimes.

At the same time, a different kind of exhibition is going on: the work of Ahmad Jahaf, Yemeni graphic designer, digital artist and freelance reporter, is being displayed at the Art the Arms Fair in Peckham, south London.

Lydia Noon: What is it like to live under bombardment in Yemen at the moment?

Ahmed Jahaf: It’s difficult to live under bombardment, but after four and a half years, it’s not as difficult as it was. When I hear the jets flying over I worry about my two children but I also run to the places the bombs have hit to take pictures or to help people. Many airstrikes have targeted buildings near me. Many times the airstrikes have targeted the windows of my house. But I don’t feel fear anymore and neither do many other Yemenis. 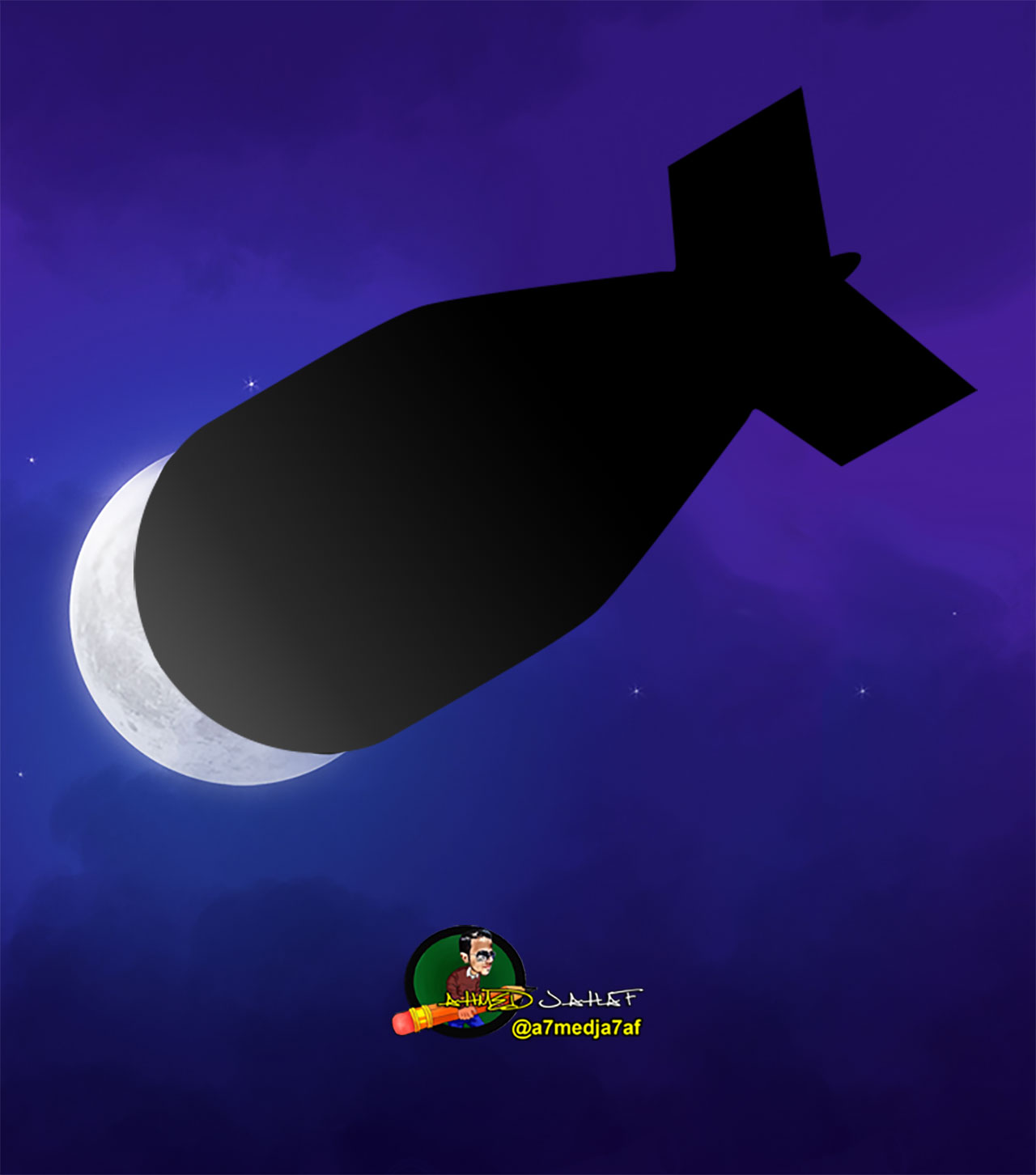 Graphic design has been my hobby since I was a child. I studied a multimedia BA degree from 2011-15 before working for many companies in advertising services and for two local TV channels as a graphic designer.

On 26 March 2015, a coalition of countries led by Saudi Arabia began bombing and imposing a blockade on Yemen with US, UK and EU support, so I decided to work on breaking the media siege on Yemen. I left commercial designs – such as logos and motion graphics – and began to represent what was happening around me and get publicity for the ongoing situation.

Your work is featured at this year’s Art The Arms Fair, which coincides with the world’s largest arms fair in London. What can art do for Yemen’s four-year civil war?
Firstly, what is happening in Yemen isn’t a civil war, it’s an aggression led by Saudi Arabia, which is fully supported by the White House. Yemen faces everyday airstrikes and a shortage of food and medicine because of the Saudi-led coalition blockade.

I still make ‘art for peace’ in Yemen after four years of war, as well as art about war crimes. But I also make artwork showing how Yemenis are strong and are still resisting this aggression.

In my artwork only two words appear: ‘war’ and ‘peace’. I’m just trying to show the ugliness of war, what happens because of war while the world is watching in silence. This is my way to protest against the injustice of this forgotten war and for peace.

You have talked about a ‘media blockade’ surrounding Yemen’s forgotten war. What do you mean by this?
Yemen’s war is not covered in the international media. Even if some media talk about it a bit, it’s not enough. The silence equals complicity. Millions in Yemen have been suffering since 26 March 2015, but the world’s media is silent, maybe because there is a good relationship between governments and Saudi Arabia. But why does Saudi Arabia spend billions of dollars to silence the media? They are afraid of our awareness. If one bomb goes off in London or Paris, the whole world knows about it, yet bombs are dropping all day, every day, on Yemen and no one says a thing. Why?

What do you think about the UK’s refusal to end its weapons trade with Saudi Arabia?
In Yemen, we believe that not only is the Saudi-led coalition bombing us, but the UK government is too a partner of the war crimes. They are still selling arms to Saudi Arabia, supporting the blockade and keeping silent about what happened and is happening in Yemen.

As long as the UK keeps sponsoring Saudi Arabia’s war in Yemen, civilians are going to die from bombs, bullets and the blockade. We are still asking: ‘How many more war crimes will there be before the UK withdraws support and stops selling weapons to Saudi Arabia?’ This is the real question for which we have to find an answer.

Which artists inspire you?
Many artists like Banksy and Peter Kennard and, from Yemen, my uncle Abdulhamid Jahaf.

What has the reaction been from fellow Yemenis to your work?
My colleagues in Yemen appreciate and encourage what I do and some use the same art techniques as me, and I am happy about that.

Does your criticism of politicians put you or those close to you in danger?
Of course. Now I can’t travel outside [of Yemen] because Sana’a international airport is closed and Aden city, where another airport is usually open, is the site of an ongoing battle of control between Saudi/UAE-backed separatists and the Yemeni government, and is too dangerous for me to travel to. Some people who support the Saudi-led coalition have written reports about me and my artwork. Many international activists have shared my art. Because of this, there are those that say that Iran sent me money to make activists say bad things about Saudi Arabia, using lies and art to change the reality, and that I pay them to protest against the Saudi-led coalition. These people also say that I make millions of dollars from this job and that I have sent fake reports to the international media.

You say that you try to be optimistic about the future of Yemen. How do you convey this through your art?
Sometimes I feel that peace is not coming. But whatever happens we will be optimistic and look for peace and hope. In any war, peace must come in the end and I hope that this will come very soon. Since 26 March 2015 until today I’m still designing for peace.

It is the Indifference of Israelis that is Killing People