How the Mainstream Media Pushes for Endless War 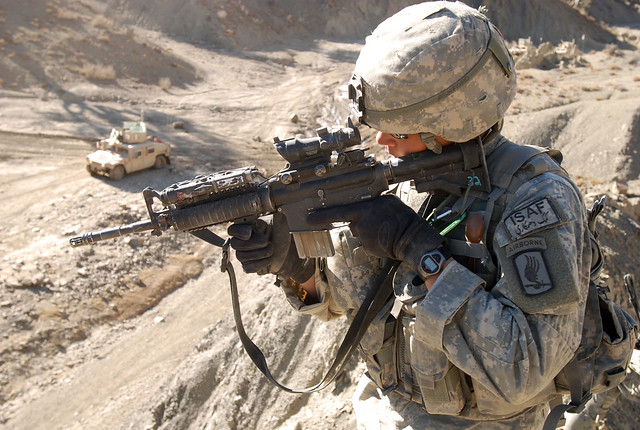 On the 18th anniversary of the September 11 attacks, the illegal US occupation of Afghanistan continues as the longest overseas war in American history. Although President Donald Trump recently declared that peace negotiations over the withdrawal of US troops with the Taliban are “dead,” reportedly because of the death of a US soldier from a suicide bomb attack in Kabul last week, the status of future negotiations is still unclear.

The Costs of War Project has found that about 147,000 people have been killed in the Afghanistan War since 2001, more than 38,000 of them civilians. However, corporate media continued to defend the “forever war” in Afghanistan by concern-trolling over an “overly hasty” withdrawal before the recent collapse in negotiations (FAIR.org, 1/31/19).

If signed, the deal would have had the US withdraw 5,400 of its 14,000 troops in Afghanistan within 135 days—bringing it down to about the same level of troops stationed there at the start of the Trump administration—with additional phased withdrawals contingent upon the Taliban’s promise to prevent Afghanistan from being a launching pad for international terrorist attacks, and progress on a political agreement between them and the Afghan government. 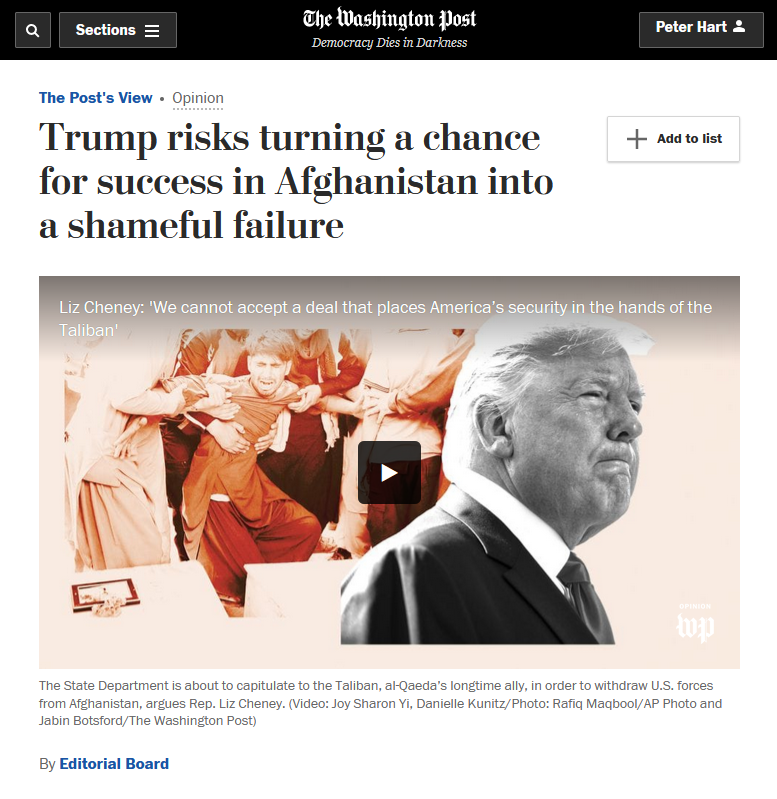 The Washington Post (8/19/19) suggests the Afghan War will turn out just fine if we just give it another year or 17.

The Washington Post editorial board’s “Trump Risks Turning a Chance for Success in Afghanistan Into a Shameful Failure” (8/19/19) dismissed the deal as “weak” and a “flimsy accord,” and argued that there’s “little reason to abandon the country in haste.” The Post argued that Obama’s reduction of troops in Iraq was a “mistake” and cautioned that Trump should avoid repeating Obama’s mistake of “committing to troop pullouts from conflict zones without first ensuring that the result is not a political and military disaster,” citing the potential danger of a Taliban takeover and a strengthening of extremist groups. The editorial did not weigh the potential human rights abuses by a future Taliban government against the tens of thousands of civilians actually killed by the ongoing conflict; the only deaths the paper mentioned were those of US troops.

The Los Angeles Times (8/14/19) painted an especially ludicrous picture of the US as a benevolent savior in Afghanistan, after warning that an “overly hasty downsizing” of US military and civilian presence could risk “some of the progress made in human rights and development,” expressing concern that a reduction in “thousands of people” working at the US embassy and civilian aid programs would be “premature.” The LA Times said this despite massive USAID programs already having been criticized as “a failure and a waste of taxpayers’ money” by government watchdog groups, and functioning primarily as a pipeline of public funds into investors’ pockets (CounterPunch, 12/5/12).

When not editorializing against the Afghanistan negotiations in their coverage, corporate media went out of their way to grant anonymity and a platform to “critics” who characterized full US military withdrawal after almost 18 years of occupation as “premature” (New York Times, 9/7/19; USA Today, 9/8/19) and worried about the US “giving up its leverage” (NBC News, 9/9/19).

The New York Times (8/2/19) gave a platform to retired generals Jack Keane and David Petraeus to lobby for keeping thousands of “Special Operations forces” in Afghanistan:

“US troops in Afghanistan have prevented another catastrophic attack on our homeland for 18 years,” General Keane said in an interview. “Expecting the Taliban to provide that guarantee in the future by withdrawing all US troops makes no sense.”

The Times might have pointed out that the September 11 attacks were carried out by militants based in the United States and recruited in Germany.

CNN’s  “Trump Meets Security Officials on Afghanistan as Concerns Mount About US Withdrawal” (8/16/19) featured anonymous “critics” who found that the “US/Taliban peace plan” could “end America’s longest-running war,” but “could also trigger a surrender for the US and a betrayal of the Afghan government.”

Critics of a prospective deal said any agreement with the Taliban amounts to defeat for the US-led effort, saying the Taliban seek to reclaim control of the country, not battle extremists or work with the Afghan government as the US had hoped.

Some critics have expressed concern that the United States could be giving away much of its leverage by announcing a troop withdrawal up front, before progress in inter-Afghan negotiations has been achieved.

NBC News’ “US Withdrawal From Afghanistan Could Trigger ‘Catastrophic’ Civil War, Ex-US Diplomats Warn” (9/3/19), was based on an Atlantic Council commentary by nine former diplomats:

“A major troop withdrawal must be contingent on a final peace,” the former diplomats wrote. “The initial US drawdown should not go so far or so fast that the Taliban believe that they can achieve military victory.”

Who are these “critics,” and how come journalists don’t go out of their way to tap other kinds of sources for their reports? While there was no shortage of sources critical of US withdrawal efforts in these reports, corporate media hosted a narrow spectrum of debate by leaving no room for sources critical of the war’s moral and legal legitimacy who advocated a complete withdrawal.

The Intercept (8/21/19) notes there is concern not only about what the US’s enemies would do after a withdrawal, but also about its allies.

The discussion also left out those who were critical of the “peace talks” for reasons that differ from those of hawkish government and military officials. Legal scholar Marjorie Cohn and the Costs of War Project have criticized the US/Taliban peace talks, arguing that they wouldn’t have led to real peace because they ignored the role of regional Afghan militias, funded and directed by the CIA, in subverting peace (Intercept, 8/21/19). These CIA-backed forces have violated laws of war designed to protect civilians by engaging in torture and killings with near impunity, pushing people toward the Taliban. Central to the US/NATO coalition’s security strategy, these militias carry out approximately seven times as many offensive operations against the Taliban as the regular Afghan forces (New York Times, 12/31/18, 8/12/19).

Not only do corporate media credulously assume that the US has always been interested in peace, conveniently forgetting that the US rejected offers from the Taliban to hand Osama bin Laden over and surrender soon after the invasion (Intercept, 8/22/17), they also erroneously presume that the US possesses the legal and moral prerogative to enforce a deal to determine the future of Afghanistan.

While it’s certainly true that things could get worse if the US withdraws, these reports conveniently omit that the US military’s very presence is a major obstacle to peace in Afghanistan. Political scientist Robert Pape studied every  suicide bomb attack in the world since 1980, like the one ostensibly responsible for scuttling the peace talks. His finding: 95 percent of all suicide bombings are a response to military intervention, and often occupation (Nation, 12/2/15). The Taliban have long held that a complete withdrawal of foreign troops and an end to the occupation is a necessary precondition for any political settlement with the Afghan government.

Although the Afghan government and the international coalition—primarily the US—have caused most of the civilian deaths during the first six months of 2019, media scholar and FAIR contributor Greg Shupak is correct to point out (In These Times, 8/1/18):

The United States and its partners also share blame for Afghan civilian deaths caused by anti-government forces. According to the International Military Tribunal at Nuremberg conducted after World War II, a war of aggression is “the supreme international crime differing only from other war crimes in that it contains within itself the accumulated evil of the whole.” What this means is that whoever starts a war is responsible for all the atrocities that occur in that war. The 2001 US-led invasion of Afghanistan was a war of aggression. The attack was not authorized by the United Nations, which means it was illegal.

FAIR has documented that corporate media have often covered for the US government’s role in cultivating Muslim extremists (Extra!, 1/02), and for its effective cooperation with Osama bin Laden’s explicit strategy of bogging the US down in expensive, bloody wars in Muslim countries (Extra!, 7/11).

The Afghans are one of the least happy populations ever recorded (Gallup, 10/26/18). Yet corporate media’s propagandistic coverage discourages the US from doing the one thing that might help change that: get out.