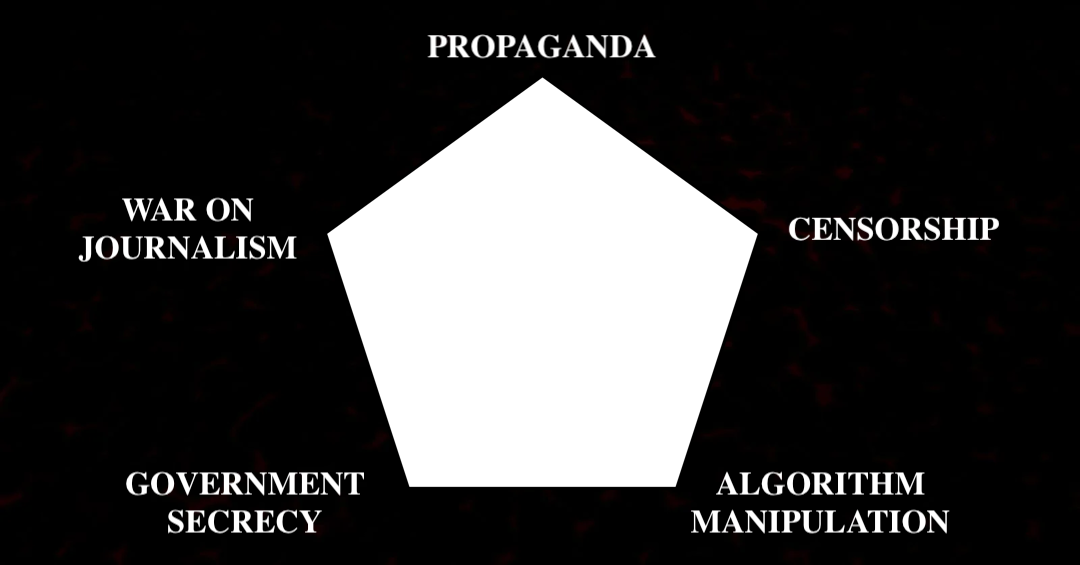 Mental narrative plays a hugely prominent role in human experience; if you’ve ever tried to still your mind in meditation you know exactly what I’m talking about. Babbling thought stories dominate our experience of reality. It makes sense then that if you can influence those stories, you’re effectively influencing someone’s experience of reality.

The powerful manipulate the dominant narratives of our society in approximately five major ways: propaganda, censorship, Silicon Valley algorithm manipulation, government secrecy, and the war on journalism. Like the fingers on a hand they are distinct from each other and each play their own role, but they’re all part of the same thing and work together toward the same goal. They’re all just different aspects of the US-centralized empire’s narrative control system.

"Nobody thinks of themselves as a warmonger, but then the spin machine gets going and before you know it they're spouting the slogans they've been programmed to spout"https://t.co/lLnPVlfyfK

That foreign leader is a dictator and needs to be removed. That inconvenient politician is sinister in some way and must not be permitted to lead. Your government loves human rights and all its wars are humanitarian. Voting works. Capitalism is great. You can trust us, we’re the good guys.

You’ll see variations on these and similar narratives churned out day after day by the corporate media and Hollywood. The wealthy media-owning class protects its own class interests by hiring media executives whose worldview matches its own, and those executives hire underlings with the same worldview, who hire their own underlings with the same worldview, and before you know it you’re looking at a media conglomerate full of people who all support the status quo politics of the media-owning class whose kingdoms are built upon that status quo.

In fact these giant media institutions are so invested in protecting the status quo that they have a very large degree of overlap with other institutions responsible for maintaining the imperial status quo, like the US intelligence cartel. News punditry is now full of “former” intelligence officials, and anytime there’s a narrative an intelligence agency wants printed it simply has an officer or a proxy whisper it to a mainstream news reporter who then uncritically repeats that narrative disguised as a news story.

Reporters within this system are not explicitly told to generate propaganda to protect status quo power. Rather, they develop a sense for what kind of reporting will get published and earn them attaboys in the newsroom and what will get spiked and cause their career to stagnate. If they fail to learn to navigate the system in this way, you simply never hear about them, because their careers peter out.

"YouTube has been deleting videos disputing the US government narrative about Russian war crimes in Bucha"https://t.co/M7zupF8AMa

Propaganda is geared toward putting narratives favorable to the oligarchic empire in front of people, while censorship is all about keeping unfavorable narratives away from public vision. We’ve long seen this expressed in the way the mass media simply refuse to give any platform or voice to critics of capitalism and imperialism, but imperial narrative management has required a whole new order of censorship since internet access became widely available.

Because the widespread ability to share ideas and information poses a major threat to imperial narrative control, empire managers have been working toward normalizing and expanding censorship on internet platforms like Google/YouTube, Meta/Facebook/Instagram, and Twitter. Any online space where a large number of people gather will find itself pressured by the US government to remove a wider and wider spectrum of content in the name of public safety, election security, containing a virus, or just keeping people from thinking wrong thoughts about a war.

Every few months since the US election in 2016 we’ve been fed a new reason why more internet censorship is needed, which is always followed by a giant purge of the newly-banned content and the accounts which created it. This trend has escalated dramatically with the Ukraine war, where for the first time there’s no pretense being made that content is being censored to protect the public interest; it’s just being censored because it disagrees with what western government and media institutions tell us.

This one relates to both propaganda and censorship, because it facilitates both. Silicon Valley officials have admitted to manipulating their algorithms to make sure that independent media doesn’t get seen very much while artificially elevating the online publications of mass media outlets on the basis that they are “authoritative sources” of information, despite the fact that those “authoritative sources” have lied to us about every war.

Silicon Valley algorithm manipulation does more damage than overt forms of online censorship, because its consequences are much more far-reaching and because people don’t even know it’s happening. When Google changed its algorithms to ensure that leftist and antiwar media outlets ranked much lower in search results than they used to, it influenced the way millions of people gather information about the most important issues in the world. And hardly anyone ever knew it happened.

If it weren’t for tech giants artificially directing traffic toward empire-approved media outlets, those outlets probably would have shut down by now. We saw a clear illustration of how disdainful the public is of mass media outlets when the paid streaming service CNN+ was forced to shut down just 30 days after its launch when it failed to maintain even ten thousand daily viewers. People don’t consume mainstream news media unless it is foisted upon them.

"If people in power were no longer able to hide secrets and spin lies about what’s going on in the world, all of our major problems would come to an end."https://t.co/NIWdBpY4Jn

Like censorship, government secrecy is another way the empire prevents inconvenient narratives from entering public awareness. By classifying information on the basis of “national security”, the empire prevents unauthorized narratives before they even get off the ground. As Julian Assange once said, “The overwhelming majority of information is classified to protect political security, not national security.”

The amount of power you have should be inversely proportional to the amount of privacy you get. In a healthy society, ordinary people would have full privacy from the government while government officials should have to be fully transparent about their lives, finances and behavior. In our society it’s exactly reversed: the people are surveilled and monitored while those in power hide vast troves of information behind walls of government opacity.

They hide everything they’re doing from the view of the public, then when people start taking educated guesses about what they might be up to behind the veil of government secrecy they get called “conspiracy theorists”. There would be no need to form theories about conspiracies if there was complete transparency for the powerful, but of course this would greatly hinder the ability of the powerful to conspire.

5. The war on journalism

Assange Is Doing His Most Important Work Yet

As important as his WikiLeaks publications are, none of them exposed the depravity of the empire as much as forcing them to look us in the eye and tell us they'll extradite a journalist for telling the truth.https://t.co/Qr3KVqH0TP

Lastly, in order to effectively control the dominant narratives about the world, the empire needs to wage a war on disobedient journalism. We’ve seen this unfold in various ways over the years, but right now none are so clear as the US empire’s persecution of Julian Assange.

The goal of the Assange case is to establish a legal precedent for extraditing any journalist or publisher anywhere in the world who tries to get around US government secrecy. Once a precedent has been set and consent has been manufactured, the war on journalism can really get going.

All of these five points are used to control the way people see, think about, and talk about their world, thereby controlling how they act and how they vote at mass scale. This enables the powerful to maintain an entirely enslaved populace which never tries to escape its enslavement, because it thinks it is already free.

Hope Lies in the Streets