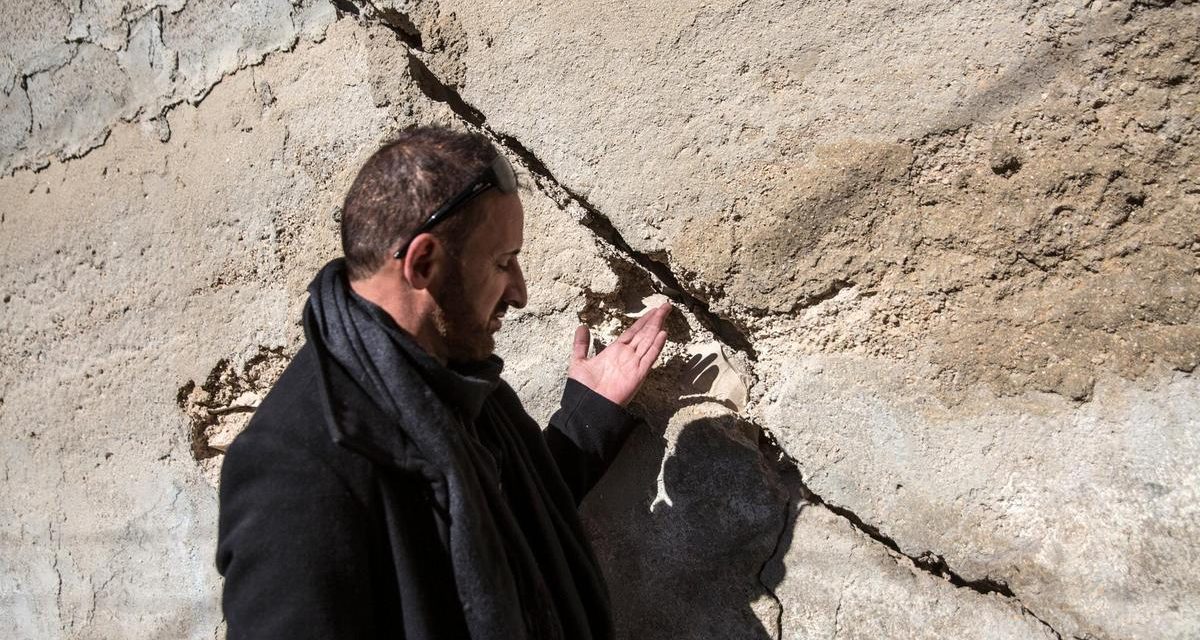 Jawad Siyam points to large cracks in the walls of Silwan, where Israel's tunnel digging has damaged Palestinian homes. Heidi Levine / The National.

Written by Jonathan Cook / the National

Israeli police forced out the Siyam family from their home in the heart of occupied East Jerusalem last week, the final chapter in their 25-year legal battle against a powerful settler organisation.

The family’s defeat represented much more than just another eviction. It was intended to land a crushing blow against the hopes of some 20,000 Palestinians living in the shadow of the Old City walls and Al Aqsa mosque.

Dozens of families in the Silwan neighbourhood have endured the same fate as the Siyams, and the Israeli courts have approved the imminent eviction of many hundreds more Palestinians from the area.

But, unlike those families, the Siyams’ predicament briefly caught public attention. That was because one of them, Jawad Siyam, has become a figurehead of Silwan’s resistance efforts.

Mr Siyam, a social worker, has led the fight against Elad, a wealthy settler group that since the early 1990s has been slowly erasing Silwan’s Palestinian identity, in order to remake it as the City of David archeological park.

Mr Siyam has served as a spokesman, drawing attention to Silwan’s plight. He has also helped to organise the community, setting up youth and cultural centres to fortify Silwan’s identity and sense of purpose in the face of Israel’s relentless oppression.

However, the settlers of Elad want Silwan dismembered, not strengthened.

Elad’s mission is to strip away the Palestinian community to reveal crumbling relics beneath, which it claims are proof that King David founded his Israelite kingdom there 3,000 years ago.

The history and archeological rationalisations may be murky, but the political vision is clear. The Palestinians of Silwan are to be forced out like unwelcome squatters.

An Israeli human rights group, Peace Now, refers to plans for the City of David as “the transformation of Silwan into a Disneyland of the messianic extreme right wing”.

It is the most unequal fight imaginable – a story of David and Goliath, in which the giant fools the world into believing he is the underdog.

It has pitted Mr Siyam and other residents against not only the settlers, but the US and Israeli governments, the police and courts, archaeologists, planning authorities, national parks officials and unwitting tourists.

And, adding to their woes, Silwan’s residents are being forced to fight both above and below ground at the same time.

The walls and foundations of dozens of houses are cracking and sinking because the Israeli authorities have licensed Elad to flout normal safety regulations and excavate immediately below the community’s homes. Several families have had to be evacuated.

Late last month Elad flexed its muscles again, this time as it put the finishing touches to its latest touristic project: a tunnel under Silwan that reaches to the foot of Al Aqsa.

On Elad’s behalf, the US ambassador to Israel, David Friedman, and Donald Trump’s Middle East envoy, Jason Greenblatt, wielded a sledgehammer to smash down a symbolic wall inaugurating the tunnel, which has been renamed the Pilgrimage Road.

Elad claims – though many archaeologists doubt it – that in Roman times the tunnel was a street used by Jews to ascend to a temple on the site where today stands the Islamic holy site of Al Aqsa.

The participation of the two US envoys in the ceremony offered further proof that Washington is tearing up the peacemaking rule book, destroying any hope the Palestinians might once have had of an independent state with East Jerusalem as its capital.

Mr Friedman called the City of David complex – at the core of occupied Palestinian Jerusalem – “an essential component of the national heritage of the State of Israel”. Ending the occupation there would be “akin to America returning the Statue of Liberty”.

While Israel, backed by the US, smashes Silwan’s foundations, it is also dominating the sky above it.

It will connect with the City of David and a network of boardwalks, coffee shops and touristic tunnels, such as like the Pilgrimage Road, all run by Elad settlers, to slice apart Silwan.

And to signal how the neighbourhood is being reinvented, the Israeli municipality enforcing the occupation in East Jerusalem recently named several of Silwan’s main streets after famous Jewish rabbis.

Former mayor Nir Barkat has said the goal of all this development is to bring 10 million tourists a year to Silwan, so that they “understand who is really the landlord in this city”.

Few outsiders appear to object. This month, the tourism website TripAdvisor was taken to task by Amnesty International for recommending the City of David as a top attraction in Jerusalem.

And now, Elad has felled the family of Jawad Siyam in a bid to crush the community’s spirits and remaining sense of defiance.

As it has with so many of Silwan’s homeowners, Elad waged a decades-long legal battle against the family to drain them of funds and stamina.

The Siyams’ fate was finally sealed last month when the Israeli courts extended the use of a 70-year-old, draconian piece of legislation, the Absentee Property Law, to Silwan.

The law was crafted specifically to steal the lands and homes of 750,000 Palestinian refugees expelled in 1948 by the new state of Israel.

Ownership of the Siyams’ home is shared between Jawad’s uncles and aunts, some of them classified by Israel as “absentees” because they now live abroad.

As a result, an Israeli official with the title Custodian of Absentee Property claimed ownership of sections of the house belonging to these relatives, and then, in violation of his obligations under international law, sold them on to Elad. Police strong-armed the family out last week.

To add insult to injury, the court also approved Elad seizing money raised via crowdfunding by more than 200 Israeli peace activists, with the aim of helping the Siyams with their legal costs.

Palestinians such as Jawad Siyam exist all over the occupied territories – men and women who have given Palestinians a sense of hope, commitment and steadfastness in the face of Israel’s machinery of dispossession.

When Israel targets Jawad Siyam, crushes his spirits, it sends an unmistakeable message not only to other Palestinians, but to the international community itself, that peace is not on its agenda.