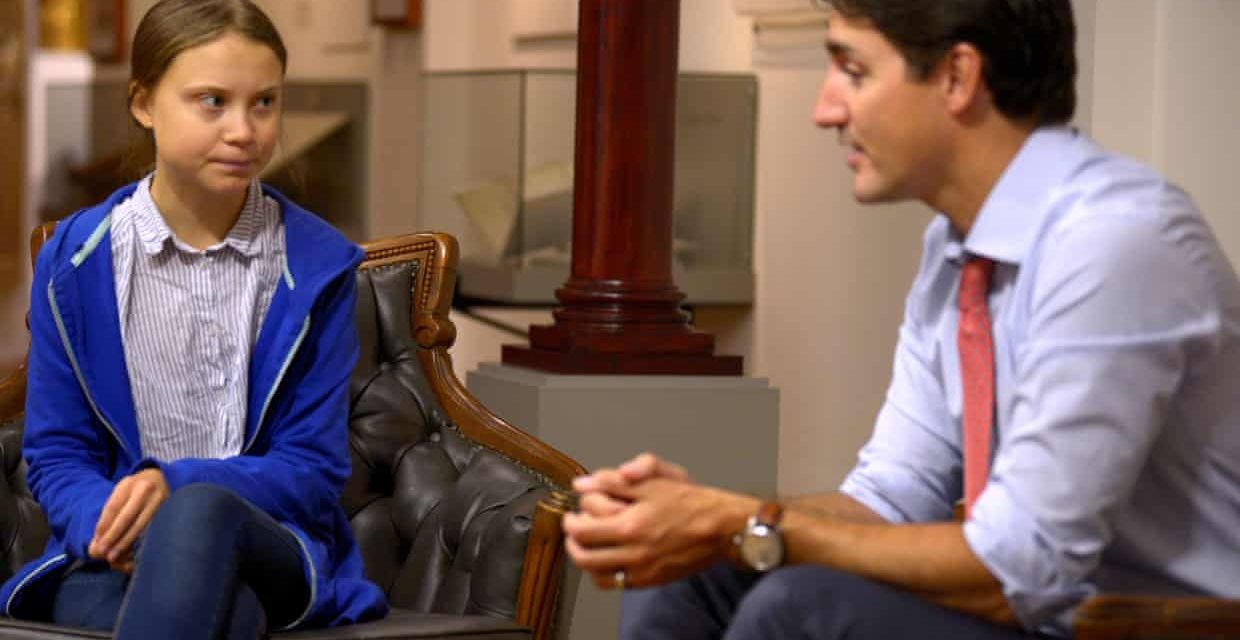 ‘If an alcoholic assured you he was taking his condition very seriously, but also laying in a 40-year store of bourbon, you’d be entitled to doubt his sincerity.’ Photograph: Andrej Ivanov/Reuters

Written by Bill McKibben / The Guardian

A territory that has 0.5% of the Earth’s population plans to use up nearly a third of the planet’s remaining carbon budget

Americans elected Donald Trump, who insisted climate change was a hoax – so it’s no surprise that since taking office he’s been all-in for the fossil fuel industry. There’s no sense despairing; the energy is better spent fighting to remove him from office.

Canada, on the other hand, elected a government that believes the climate crisis is real and dangerous – and with good reason, since the nation’s Arctic territories give it a front-row seat to the fastest warming on Earth. Yet the country’s leaders seem likely in the next few weeks to approve a vast new tar sands mine which will pour carbon into the atmosphere through the 2060s. They know – yet they can’t bring themselves to act on the knowledge. Now that is cause for despair.

The Teck mine would be the biggest tar sands mine yet: 113 square miles of petroleum mining, located just 16 miles from the border of Wood Buffalo national park. A federal panel approved the mine despite conceding that it would likely be harmful to the environment and to the land culture of Indigenous people. These giant tar sands mines (easily visible on Google Earth) are already among the biggest scars humans have ever carved on the planet’s surface. But Canadian authorities ruled that the mine was nonetheless in the “public interest”.

Here’s how Justin Trudeau, recently re-elected as Canada’s prime minister, put it in a speech to cheering Texas oilmen a couple of years ago: “No country would find 173 billion barrels of oil in the ground and leave them there.” That is to say, Canada, which is 0.5% of the planet’s population, plans to use up nearly a third of the planet’s remaining carbon budget. Ottawa hides all this behind a series of pledges about “net-zero emissions by 2050” and so on, but they are empty promises. In the here-and-now they can’t rein themselves in. There’s oil in the ground and it must come out.

This is painfully hard to watch because it comes as the planet has supposedly reached a turning point. A series of remarkable young people (including Canadians such as Autumn Peltier) have captured the imagination of people around the world; scientists have issued ever sterner warnings; and the images of climate destruction show up in every newspaper. Canadians can see the Australian blazes on television; they should bring back memories of the devastating forest fires that forced the evacuation of Fort McMurray, in the heart of the tar sands complex, less than four years ago.

The only rational response would be to immediately stop the expansion of new fossil fuel projects. It’s true that we can’t get off oil and gas immediately; for the moment, oil wells continue to pump. But the Teck Frontier proposal is predicated on the idea that we’ll still need vast quantities of oil in 2066, when Greta Thunberg is about to hit retirement age. If an alcoholic assured you he was taking his condition very seriously, but also laying in a 40-year store of bourbon, you’d be entitled to doubt his sincerity, or at least to note his confusion. Oil has addled the Canadian ability to do basic math: more does not equal less, and 2066 is not any time soon. An emergency means you act now.

In fairness, Canada has company here. For every territory making a sincere effort to kick fossil fuels (California, Scotland) there are other capitals just as paralyzed as Ottawa. Australia’s fires creep ever closer to the seat of government in Canberra, yet the prime minister, Scott Morrison, can’t seem to imagine any future for his nation other than mining more coal. Australia and Canada are both rich nations, their people highly educated, but they seem unable to control the zombie momentum of fossil fuels.

There’s obviously something hideous about watching the Trumps and the Putins of the world gleefully shred our future. But it’s disturbing in a different way to watch leaders pretend to care – a kind of gaslighting that can reduce you to numb nihilism. Trudeau, for all his charms, doesn’t get to have it both ways: if you can’t bring yourself to stop a brand-new tar sands mine then you’re not a climate leader.

Bill McKibben is an author and Schumann distinguished scholar in environmental studies at Middlebury College, Vermont. His most recent book is Falter: Has the Human Game Begun to Play Itself Out?

The Issue Before Us is Death… (Sermon by Chris Hedges)